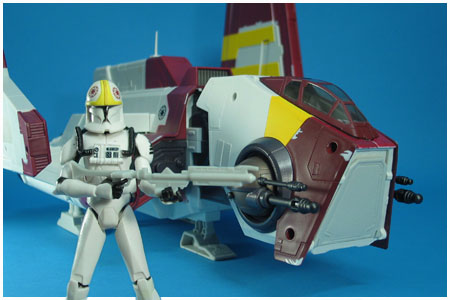 The Clone Wars
Hasbro's Republic Attack Shuttle was officially revealed at the 2011 International Toy Fair. This vehicle kept the tradition of producing a new large vehicle every year, and marks the first large vehicle to exist solely in The Clone Wars, and not based on something you've seen in the six feature films.

The Republic Attack Shuttle doubles as a interactive play environment when all its pieces are folded out. It features many moving pieces and action features as well as sounds and a pack in clone Pilot action figure.

Back To The Clone Wars Collection

What is your latest Kenner acquisition?
The Rise of Skywalker - The Emperor Mini Bust
Why was Kenner totally unware of Luke's incorrectly colored yellow lightsaber?
Phoenix Board # 207: BS Rancor, Book of Boba Fett, and more
Rancor - Haslab 2021
Jumar Rebel Base
Imperial Assault Hovertank