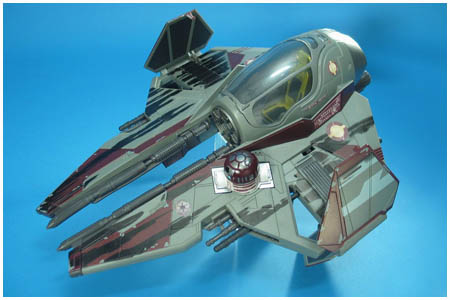 The Vintage Collection
Announced at Hasbro's presentation at the 2011 New York Comic-Con, the first non-Original Trilogy-era vehicles to be released in Kenner-style packaging consisted of two repaints, the AT-AP (All Terrain Attack Pod) originally released in the 30th Anniversary Collection in 2008, and the Obi-Wan's Jedi Starfighter (which is actually a repaint of the Anakin's Jedi Starfighter from the 2005 Revenge of the Sith line), and a virtual repack of the Republic V-19 Torrent Starfighter which was originally released in The Clone Wars collection in 2008. The V-19 also revealed for the first time The Clone Wars logo wrapped within the Star Wars banner, looking similar in style to that of The Empire Strikes Back logo.

Scheduled to be released on Hasbro's street date of January 30th, 2012, the vehicles, much like many other items due to be available at the same time, were first spotted in stores more than a week earlier, priced around the $30 mark.

ESB Candy Heads
Recent Acquisitions
POTF2 worth keeping?
My mostly-kitbashed customs
Don's Custom Figures
Anyone know what these vintage accessories are?
LightSword's Corner: A Tour of my Collection