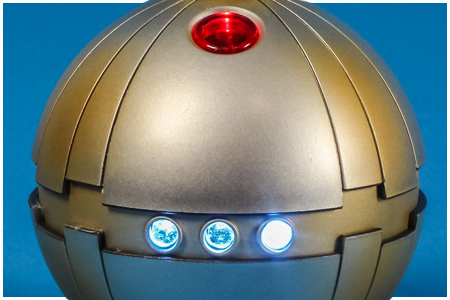 The Star Wars  Thermal Detonator - "Hot Potato" game is fun for the whole family. Activate the switch just like Princess Leia did in Star Wars: Return of the Jedi. Once the detonator sounds begin, pass it from person to person as fast as possible. Time will quickly start to run out. Any player that drops the Detonator or the player holding the Thermal Detonator when the time expires is out of the game.

The Thermal Detonator "Hot Potato" game also has a movie mode. Turn the switch on the back of the device from "GAME" to "MOVIE". In movie mode, the device will feature lights and sounds seen in Star Wars: Return of the Jedi.

What's In The Box?
Points Of Interest