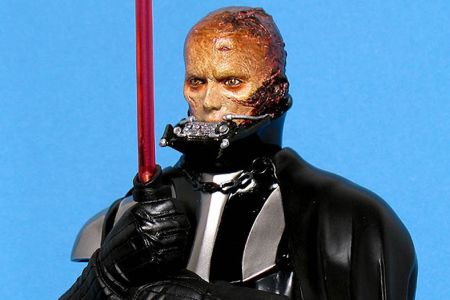 Entertainment Earth Exclusive
Collectible Mini Bust
Skywalker was no more. As Darth Vader, he killed the leadership of the Separatists, bringing an end to the Clone Wars. In his rage, he would bring about the death of his wife, fulfilling the terrifying vision that prompted his turn to forbidden knowledge. When his former mentor tried to stop his spree of destruction, Vader suffered grievous injuries in the lightsaber duel on Mustafar that followed. Vader required cybernetic enhancements and replacements to sustain him. His pure innocent self seemingly lost forever, Darth Vader cast a dark pall over the galaxy, as he was one of the foremost agents responsible for the spread of the Emperor's draconian New Order.