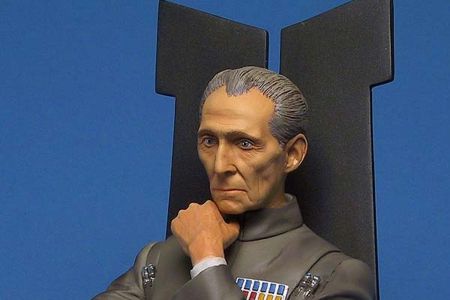 Collectible Mini Bust
Grand Moff Tarkin was the Imperial governor of the Outland Regions, and the mastermind of the Death Star project. A brilliant and ruthless tactician, Tarkin was a loyal adherent to Emperor Palpatine's vision of the New Order. He saw the Death Star as the ultimate weapon to ensure absolute rule over the galaxy. The power of the battle station's prime weapon was enough to deter any rebellion, he reasoned. To demonstrate the Death Star's power, he destroyed the planet of Alderaan.

Some questioned whether Tarkin's methods were merely bids to aggrandize his own status, in defiance of the Emperor's ultimate goal. The truth will never be known, for Tarkin perished aboard his creation. The Rebel Alliance dared to wage war with the Empire, and targeted a weak spot in the battle station. A proton torpedo volley fired by young Luke Skywalker sealed the station's fate. Tarkin was killed in the resulting explosion.