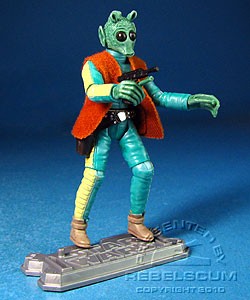 Comments: The bounty hunter Greedo is hired by Jabba the Hutt to capture Han Solo. The Rodian finds his quarry, at last, in the Mos Eisley cantina. As he and Solo eye each other across the table, Greedo readies his blaster — unaware that Solo is doing the same thing.


Back To Saga Legends