San Diego Comic-Con is THE summer event (in a non-Celebration year) for Star Wars connoisseurs. You won't find a larger cavalcade of comic-books, sci-fi memorabilia, superheroes, stormtroopers, giveaways, or toys anywhere in the country. Rebelscum deployed a team of reporters to join the 80,000+ attendees and cover all the various Star Wars angles of the show - from autograph sessions with Carrie Fisher and Mark Hamill to the exclusive products from Gentle Giant and Master Replicas. This year's Comic-Con was the biggest yet, occupying more than 600,000 square feet of space - with the Star Wars Pavilion alone soaking up an incredible 10,000 sq ft! At the center of the pavilion was a life-sized X-wing Fighter, with a large screen behind it that projected assorted Star Wars promotions, such as video game clips, fan films, and montages from the two trilogies. It was quite the hot spot for fans to stop and take pictures - I doubt there is a single object in San Diego that weekend more photographed than that X-wing...

C2 Adventures
Right beside the starfighter was the C2 Ventures booth, where Star Wars actors from both the old and the new films were signing autographs and posing for pictures. Mark Hamill and Carrie Fisher were among the main attractions, along with Jake Lloyd (young Anakin, no longer looking quite so young), Ray Park (Darth Maul), Kenny Baker (R2), Peter Mayhew (Chewie), Amy Allen (Aayla Secura), Daniel Logan (young Boba Fett), and more. If you got an autograph, you very likely purchased it from Rebelscum's lovely and talented Anne Neumann, who was expertly manning the cash registers throughout the con. Hyperspace members could also keep up on the autograph activities throughout much of the weekend thanks to the Star Wars webcam.

Brick and Polygons
On the other side of the X-wing were a series of smaller booths, including a small LEGO booth. Beside displaying a life-sized LEGO Vader and R2, the booth had a single kiosk that debuted a very impressive LEGO Star Wars video game. Due out after Revenge of the Sith, the as-yet untitled console game was exactly like playing with your LEGO sets using a console gamepad. It sported an isometric view of the Star Wars LEGO mini-figs running around LEGO-land completing missions, solving puzzles, swingin' lightsabers, and cruising around in a variety of LEGO vehicles. The title will allow gamers to play through scenes from the first three movies, and even in it's incomplete state, looked like a winner. IGN has a short preview of the title right here.

We chatted with the Giant Interactive (the company publishing the game) rep there for a while and during a discussion about the various playable LEGO characters that will be in the final version of the game I mentioned General Grievous. The rep gave me a sly look and, turning back to the game, mumbled that Grievous was on the list - leading me to think that we'll not only see him in E3, but also as a LEGO character/mini-fig.

The rest of the LEGO section didn't hold much in the way of new material. They did have the recently released Falcon playset, along with a couple of the newer vehicles, including the TIE Fighter four pack.

Gentle Giant Gets Ticketed
Near the LEGO booth was the massive Gentle Giant area. Of course the big news at Gentle Giant was the last-minute change in how they were allowed to sell their convention exclusive Stormtrooper Luke bust and Spirit of the Rebellion bust-ups. The Giants arrived expecting to sell what was doubtlessly going to be a highly coveted item on a first come, first served basis, but were told by the folks running the convention (right before the doors were to open on the first day) that all exclusive toys had to be sold using a raffle system. This was done in an effort to help control the crowds and prevent long lines from forming in the aisle ways (though it failed to prevent the long lines fans waited through just to get a ticket for the raffle). From the Comic-Con website:

"Limited Edition Giveaways and Convention Exclusive Products are not distributed on a first come first served basis. This is for the safety of all attendees and to ensure that attendees and have an equal chance to purchase convention exclusive products."

Didn't get lucky enough to purchase Luke or the bust-ups? They'll both be making appearance at Wizard World Chicago in mid-August.

New items on the rotating displays included the Stormtrooper Han, IG-88, and a 24k gold-plated C-3PO (which looks stunning when highly polished) mini-bust. There were also silent auctions for unpainted porcelain "pure" prototypes of the Clone Trooper, Stormtrooper Luke, and Boba Fett. While I didn't catch any final bids, I know they pretty easily all ran up into the thousands...

Making the Jump to Lightspeed
The LucasArts booth held many a demo of upcoming games, offering playable versions of Battlefront, Republic Commando, Knights of the Old Republic II, and Galaxies: Jump to Lightspeed. The game kiosks featured flat screens, thundering bass, and enthusiastic LucasArts employees on hand to answer questions and show off various aspects of the games that you wouldn't otherwise see in five minutes of play time. They were also doling out Republic Commando patches and holding some pretty heated Battlefront tournaments. Further details can be found right here at the LucasArts website. All the titles on display looked stellar - Republic Commando in particular.

One Ring Replica to Rule Them All
Across from LucasArts was Master Replicas, who were selling their slick miniature "as first built" Obi-Wan Lightsaber, which will also be appearing at a variety of conventions throughout the summer. At $35, these .45 scale sabers are a great addition to the MR line-up, and I suspect they'll bring many a collector into the fold - particularly those who couldn't swing (pun!) the full-sized replicas. The booth itself showed off some of the upcoming products such as the mighty AT-AT (which was every bit as detailed as you'd expect, and then some), more lightsabers, assorted blasters, and some cool non-SW items such as a LotR Sting replica - glowing blue when orcs are about - a motion-tracker from Aliens, and a Pirates of the Caribbean gold coin (complete with replica curse, I assume). The highlight had to be the 1-to-1 scale Sauron One Ring, "an electronic replica of the Dark Lord of Mordors armor-clad severed finger". Did I mention the elvish script on the ring that glows when turned on? Too cool.

"While we are always looking at possible releases, nothing is planned at this time" - The Hasbro Company Line
Of course Hasbro had a considerable presence, displaying the latest figures with the old-school packaging. Throughout the course of the convention they kept adding new items to their displays - the Unleashed IG-88, Sandcrawler, and a new Y-Wing all made appearances well into the show. Hasbro was also handing out posters, Unleashed cardbacks, and Galactic Heroes Biker Scouts - some nice giveaways (which translated into not-so nice lines that wrapped around the booth). The Biker Scout came packaged in a little baggy with a tag stapled to the top that unfolded into a small brochure showing off the Galactic Heroes line.

Some of the items within the display cases included:

On Friday afternoon our friends from Rhode Island held a QnA session where they ran through what we can expect throughout the rest of the year and some of their plans for Episode III. Our recap of the event can be seen over here and here. Hasbro's Silver Saga Edition Sandtrooper was also available for purchase - and had to be one of the easiest convention exclusives to lay hands on thanks to a supply that easily met demand and the presence of about a half dozen cash registers to take orders.

Though tucked away in more modest-sized booths, Code 3 and Rubies were also in the Star Wars pavilion, offering a look at existing and new products. Both the Rubies Emperor and Vader masks were particularly impressive, along with the life-size Vader costume that featured elements from the Episode III Vader outfit. Rubies also held raffles on Friday and Saturday where a couple lucky winners scored a Vader helmet and one of the life-sized Yodas.

The Star Wars pavilion wasn't the only place to spot collectibles from a galaxy far, far away. Sideshow Toys, makers of some of the finest 12" scale figures on the market today, recently picked up the 1/4 scale license, and had a couple prototype figures on display. The 1/4 scale Tatooine Luke, which stands roughly 18" tall, sported some outstanding details, particularly in the wardrobe department, though very clearly needed some work on the face sculpt (apparently there aren't any dentists in the outer rim). It was noted on the display, however, that these were prototypes and therefore subject to change. Han Solo, on the other hand, looked fantastic - sculpting and details on par with what I've come to expect from Sideshow. For those that can afford 'em, this is going to be an awesome line...

Off-Site Links Of course the Comic-Con is far, far more than just Star Wars collectibles, and below is a quick list of some links to other reports of SDCC events. 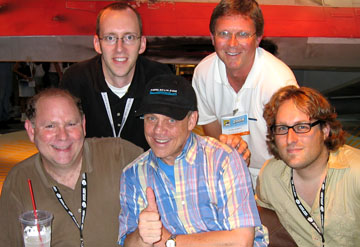 Signing off from San Diego Comic-Con 2004!