Limited Run Release NES/GB Classic Star Wars Cart
Posted by Jeremy on June 25, 2019 at 05:19 PM CST
A long time ago in a galaxy very nearby - 1991 to be precise - the side-scrolling platform version of Star Wars was released on NES and Gameboy, but when the Nintendo Classic Edition and the Super Nintendo Classic Edition - a pair of dedicated consoled for emulating Nintendo games - that were respectively released in 2017 and 2017, Star Wars gamers were annoyed that it didn't include and of the Star Wars titles from Nintendo family.

Owners of the original, cartridge-loading NES and Gameboy consoles are in for a treat thanks to Limited Run who recently shared news that they are bringing Star Wars back!

A long time ago in a galaxy very nearby, Star Wars was released on NES and Gameboy. Now, it gets a physical Limited Run re-release on June 28 at 10am & 6pm EDT alongside Star Wars: Bounty Hunter.

Get your copy of Star Wars on one of its original consoles this Friday! pic.twitter.com/QZOBaz5JiL

According to Limited Run, a company who is in sync with the video gaming community's needs, have said that "there will be a way to open the box from the back without damaging the front," meaning collectors will be able to have their cake and eat it. This Limited Run re-release will come packaged in a premium rigid box with silver foil stamping, reversible poster, a commemorative coin and a retro cart pin, and will be sold - priced $84.99 - in two batches on Friday at 10 am and 6 pm, EDT. 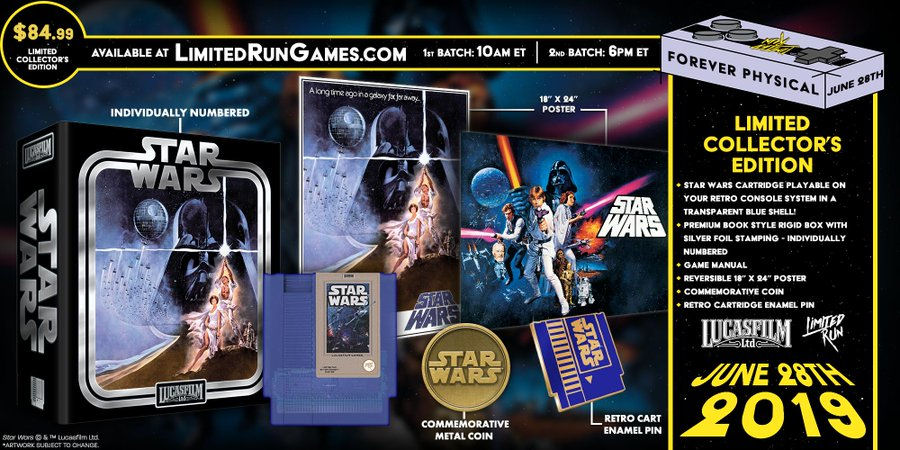 The days of blowing on the contacts of your favourite Star Wars gaming cartridges are over!