The Mandalorian & Baby Yoda: Make Your Own!
Posted by Jeremy on December 14, 2019 at 10:53 PM CST
It's never easy trying to predict what toys will grab the imagination of the toy-buying public. Who'd have thought that a viral video made by a suburban mother would push sales for Hasbro's electronic Chewbacca mask through the stratosphere?

While pundits are saying that Disney is losing out on $2.7 million in revenue, the absence of marketable Baby Yoda merchandise isn't quite on the same scale (we hope) but as the two most famous supply/demand blunders in the history of modern toy industry, but the obvious lack of toys, apparel, collectibles of and accessories of "The Child" prompted CNET to go digging for assurances that fans would not go unhappy this Christmas season.

The turn out from LEGO has been just as frustrating, with one set released - 75254 AT-ST Raider - and another - 75267 Mandalorian Battle Pack - coming soon. 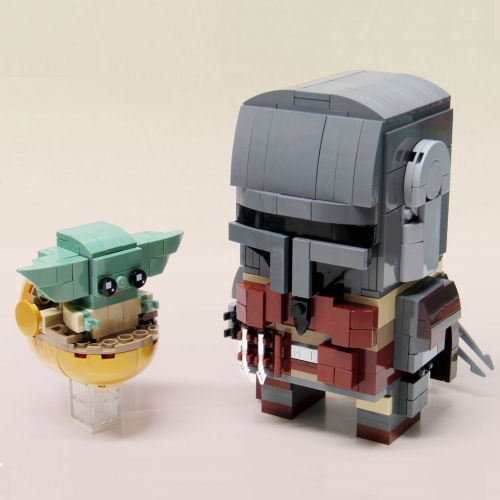 BaronSat, aka Eric Druon, has been a fan of LEGO since a child but it was the introduction of the first Star Wars sets in 1999 that started him down a two decade long track of MOCs (My Own Creations).

"I'm a big fan of SW since the first movie, I collected toys (Kenner), comics, books and all stuff that was available at the time." explained Eric, who was brought out of a LEGO dark age thanks to the new partnership with Lucasfilm.

His passion for creating LEGO Star Wars models - sometimes based on official LEGO versions but more often than not are completely original - all began with 7140 X-wing, and this inspired him to build Jabba's Sail Barge. "It was built in gray bricks as it was the color I had the most in stock." he recalled.

Like many Generation X fan boys, Eric is also interested in 70s and 80s toys like Six Million Dollar Man, some GI Joe/Action Man, Aliens, TMNT, Zoids as well as vintage LEGO. When he's not busy collecting or reading DC comics he likes to express his interests by making custom LEGO creations which he displays on his website - since the earliest days of the LEGO Star Wars license. 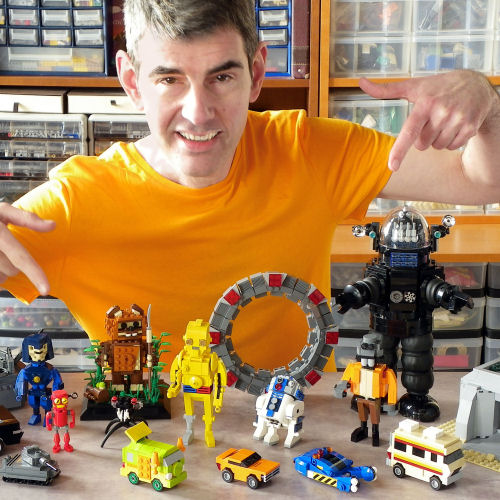 His current focus is The Mandalorian, airing on Disney+ in the USA, Canada, Puerto Rico, The Netherlands New Zealand and Australia now, which he says "really catches the spirit of Star Wars and does not just make winks, we really are in this universe that we love. though he feels that they aren't long enough to satisfy his thirst! Like a lot of fans, he has a particularl interest in Boba Fett so when episodes the TV shows main character - the eponymously named The Mandalorian - turned out to be such a "badass" he was inspired to commit this newest member of the Star Wars cast to brick.

Having a tenderness for the LEGO Brickheadz theme, a line that had its Star Wars content terminated when 75232 Kylo Ren & Sith Trooper was released during the last quarter of 2019, Eric decided that continuing the theme in his own vision was the way to go. He didn't just want to come up with a reskinned Boba Fett, so he doubled the proportions in order to reflect The Mandalorian's stature. By using the BrickHeadz construction method he was able to finish his design quickly, maintain a small footprint and still include all the characteristics and details that make these garden gnome-like builds so enjoyable. 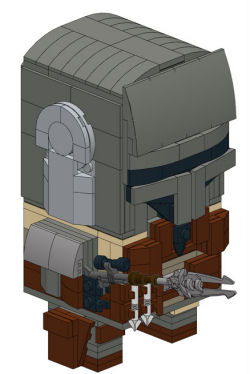 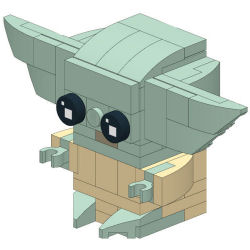 Eric explained that The Mandalorian came about from promotional footage, which is why the armour is from early episodes, rather than the more polished beskar that we see in later episodes. When the series aired and Baby Yoda appeared Eric "had no choice but to build one." he said. And, fortuitously, with The Mandaalorian being double the size of a regular BrickHeadz model, Eric could design his own Baby Yoda at a scale identical to that of a BrickHeadz set.

Instructions for both of these custom LEGO models are available on Eric's website; while The Child is free, Eric asks for 5 for The Mandalorian instructions.

Keep an eye on baronsat.net where you might see Eric expand his selection of customs from The Mandalorian with builds of the Razor Crest, speeder bikes from the Dune Sea hunt, as well as Buildable Figures - especially the Heavy Artillery Mandalorian - and (hopefully) a Tatooine streets-scene.
SEND