Beast Kingdom SDCC Exclusive EAA-122SP The Mandalorian Beskar Armor Review
Posted by Jobi-Wan on September 3, 2022 at 08:44 AM CST
This is the way, Rebelscum! We would like to welcome Nick Napoli, who originally joined the site back in 2017, back to the Rebelscum family. Nick has provided coverage of events such as Celebration, SDCC, and New York Toy Fair in addition to reviews of products from the more unique side of the galaxy far, far away. In addition to contributing to Rebelscum, Nick works on his own site CoolToyReview.com providing news and reviews on a wide variety of licensees. As part of a new collaboration, you will soon see some Rebelscum staff contributing some fun content to Nicks site as well. We look forward to our new collaboration with Nick and CoolToyReview and hope to bring you guys some great and interesting new content in the period ahead. 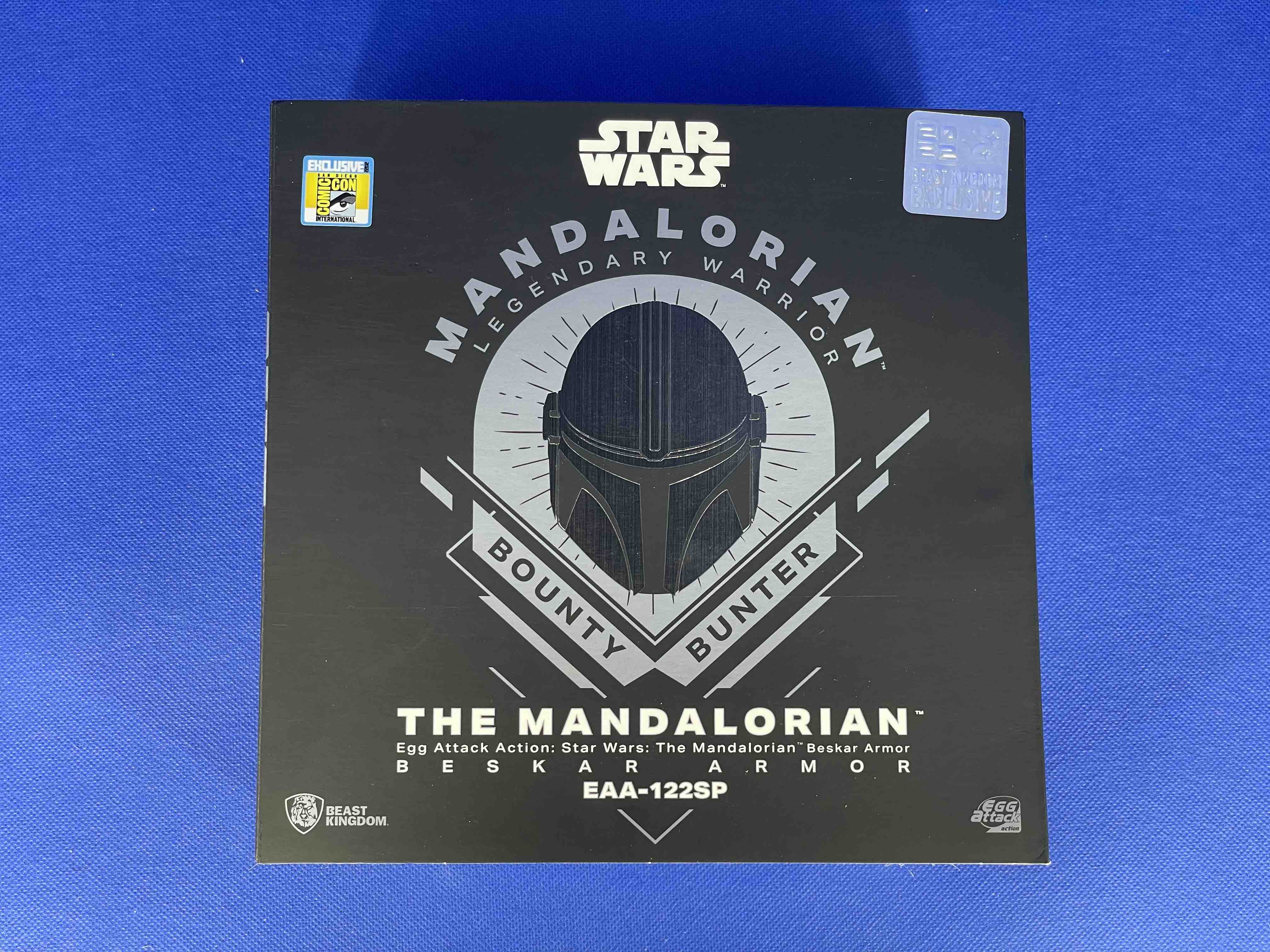 Its been a while since we have seen Beast Kingdom at a convention and with the return of SDCC, we also see the return of the Beast Kingdom show exclusive. These have been hit or miss in the past with a questionable chrome Millennium Falcon or Stormtrooper, but then you get a chrome Captain Phasma or Darth Vader with light-up saber where the enhancements make sense. This year they went with an electro-plated aesthetic and some new accessories that make this a must-have instead of a repainted release. Even the box here features a reflective foil look versus the product image on the front of the baseline release, a nice touch. 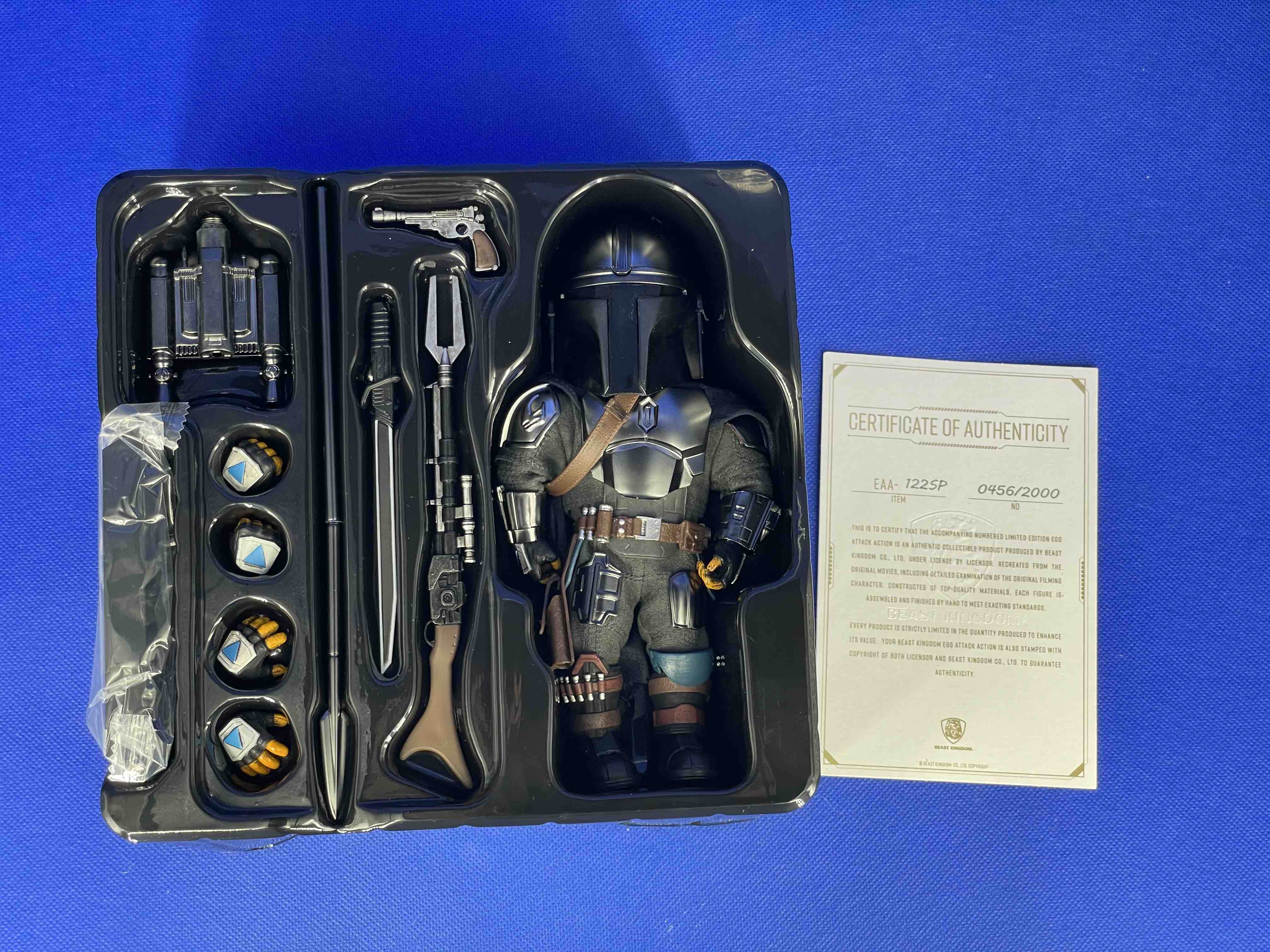 Lets talk about accessories. Beast Kingdom always gives us more than enough to allow for almost any pose. Compared to the base release, he still has the blaster pistol, amban rifle, beskar spear, and jetpack. However, instead of the baby carrier and mythosaur necklace you get the beskar spear and the amazing Darksaber. In addition to the electro-plated armor, you also get an electro-plated jetpack, helping complete the look. Yes, it still mounts via magnet, a great feature from the standard model. We would have liked to see an electro-plated beskar spear included as well, but there does not seem to be much space left on the tray. This convention exclusive comes with a certificate of authenticity, the first time we have seen Beast Kingdom include one with an exclusive. It is even numbered, allowing you to see the extent of the production run. Also notice how Beast Kingdom inserted the base on the left instead of taping it under the tray, which is quite welcome as it doesnt fall out of the box when you remove the tray. 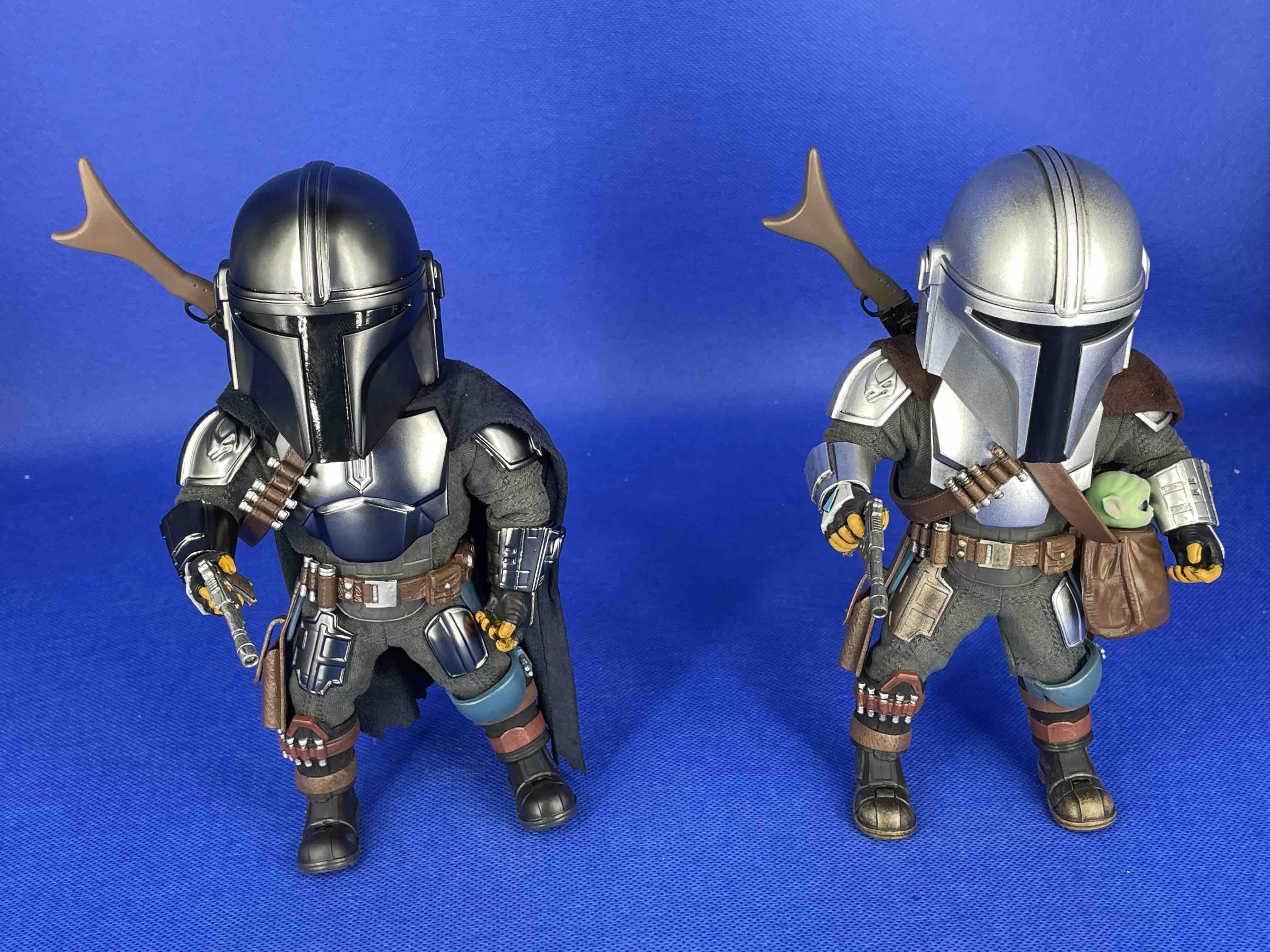 Side by side you can tell how much cooler this figure is over the standard release. The electro-plating really makes it pop. Notice even the visor captures the light and makes it more reflective. Both still feature the soft goods fabric under suit and cape, however the convention exclusive version has a darker cape, more reminiscent of season 2 Mando. The cape still has the wire in it allowing you to pose in a wind-blown look or just draping it down the side. Beyond that, special edition Mando has the same posing as standard Mando. No surprises there as Beast Kingdom is using the base figure body. 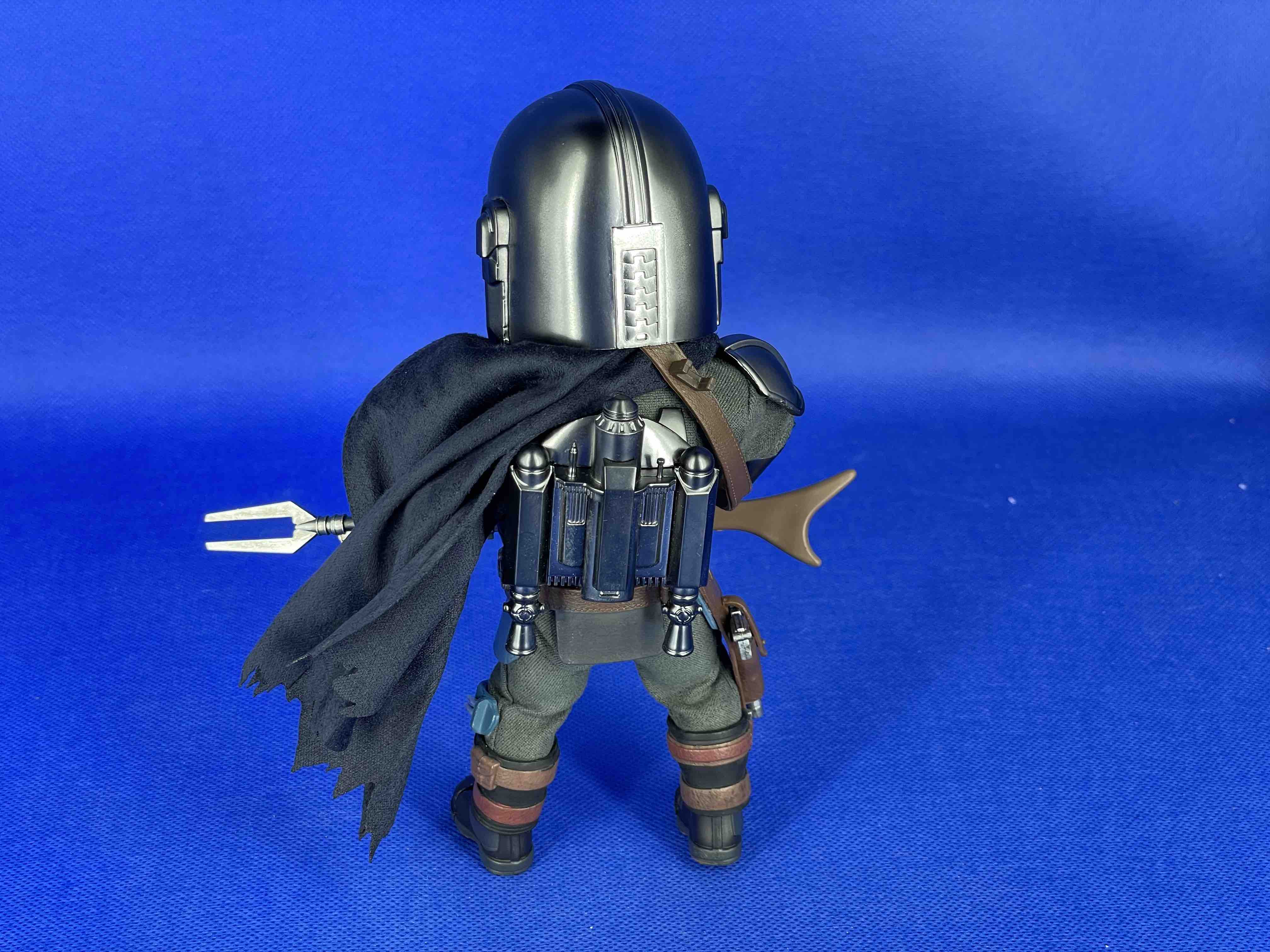 You can see here and through the rest of the images that Beast Kingdom still captured all of that detail. Again, the jetpack looks amazing and its great Beast Kingdom made it electro-plated versus the standard metallic-painted look, as it would dull the aesthetic of the figure. The little jumpsuit underneath really elevates the quality of this six-inch figure over just going with a plastic jumpsuit, its like a mini Hot Toys in the level of detail and quality that Beast Kingdom has crammed into these tiny britches. Not to mentioned they kept the full functionality of the bandolier, allowing you to mount the amban rifle or, with some patience, the beskar spear. Unfortunately, the beskar spear is not electro-plated but a very welcome accessory, as is the Darksaber. We would have loved a light up function for the Darksaber, but speaking with a Beast Kingdom rep, the days of the super tiny batteries in the hilts seems to be over. They are opting for glow-in-the-dark paint on sabers from here out which we have seen with the Darth Maul release and is planned for the upcoming Obi-Wan Kenobi release. Lastly, while posing we noticed that the beskar spear splits in half, allowing you to position each half in a hand before connecting for a two-handed pose. This negates having to slide it through one hand and position it into another, a very welcome feature. 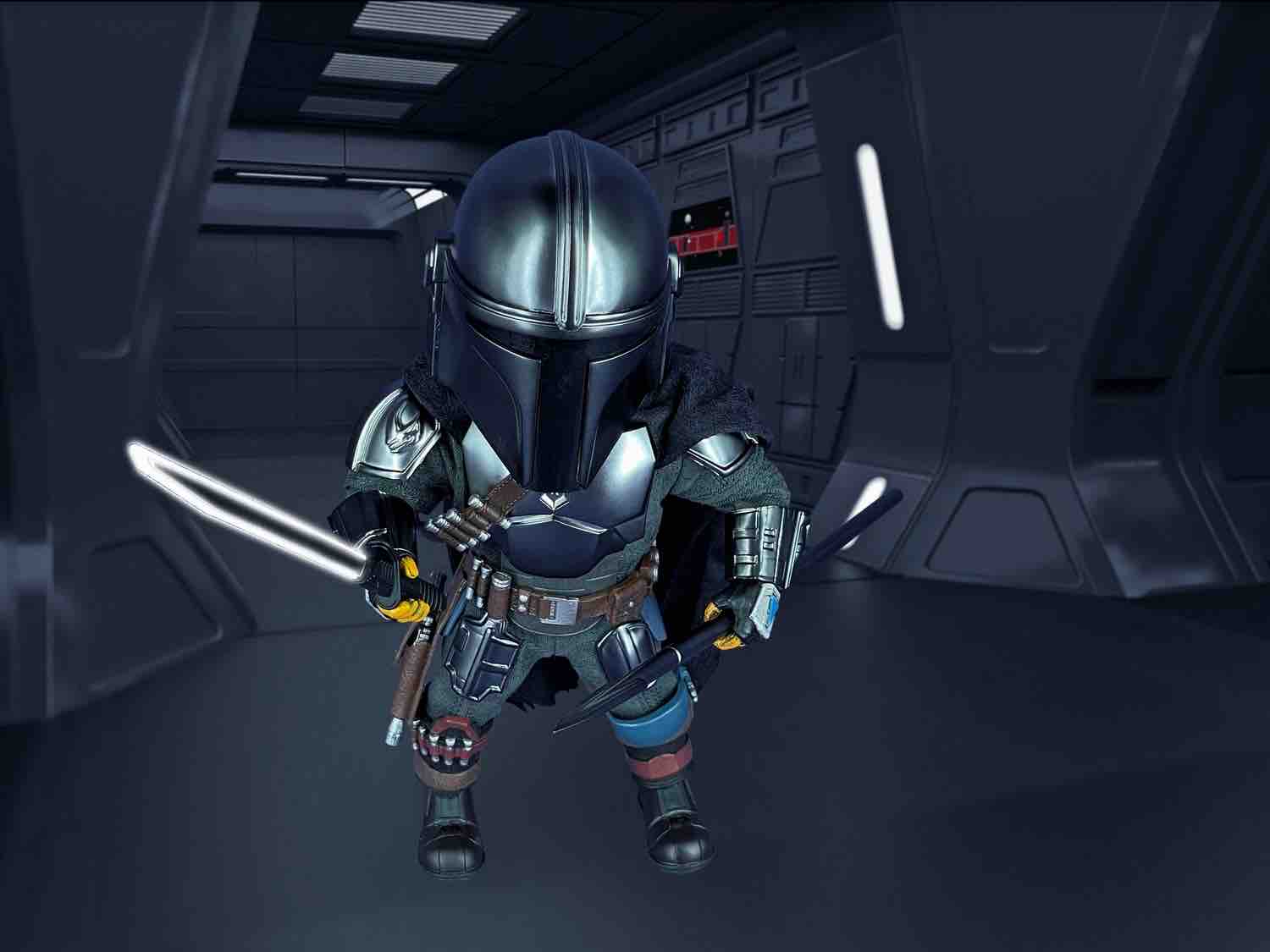 Altogether the Force is strong with this one. Beast Kingdom returned in force this year with a great Star Wars exclusive, that any fan of the Egg Attack line, or of The Mandalorian is going to want. While there is no definitive version that includes everything you get with the other two release of the Mandalorian figure, there is enough different with this one to give it value and make it more than just a re-release with a new paint job. Unfortunately, this was only available at the show, so you cannot order it at this point. It is likely that this guy will reappear at future cons including NYCC and he might even pop-up on Beast Kingdoms direct sale website (Beast-Kingdom.us). Of course, you could also turn to eBay if patience is not your thing, the price fluctuates but it is not too much over the retail price of $100. We hope you enjoyed this special look at the newest Egg Attack figure and hope to bring you more on this amazing, underappreciated line from Beast Kingdom.

So Rebelscum, were you able to pick up this SDCC exclusive? Do you have any other Best Kingdom pieces in your collection? Let us know in the forums!