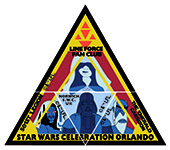 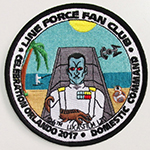 The Sith Holocron Puzzle Patch set is made up of four separate pieces and will be limited to just 270 of each. Hosted and designed by the Line Force Fan Club, it will be a scavenger hunt spanning all four days of Star Wars Celebration Orlando 2017.

The Emerald Garrison does not have a booth, but will be walking around the show floor and checking in at the Line Force Fan Club booth throughout the event, so be sure to check the other booths and all of the Facebook pages for daily posts on where to find the Emerald Garrison and what times to come back for your chance to obtain a patch piece.

One chance per person per spot in line. For example: If you are in line on Thursday at 1pm trying for a patch and you win, then you will have to wait to come back on the next time slot to win another one. If you didn't win the patch, you must go to the back of the line and are free to continue this until that hour's allotment of patches are gone. If you don't win the patch, you will receive the image in sticker form while supplies last.
SEND