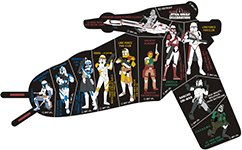 The Republic Gunship 12-piece puzzle patch set features Clone Commanders from Star Wars: The Clone Wars and is designed & hosted by our friends at Line Force Fan Club. It's a massive set that is nearly 2' wide by more than 1' tall. The scavenger hunt spans all four days of Star Wars Celebration Orlando 2017. Only 250 pieces of each set will be available at the show April 13-16, 2017. The following sponsors make up the entire set:

Though the Emerald Garrison, F.A.Y.A.S.W.C. & R2-Detroit do not have booths at the show, they will be walking around the event and dropping in from time to time at the Line Force Fan Club (Booth #1954). The Line Force Fan Club will also be posting updates daily on where to find these three clubs on their Facebook page. Each group will have different requirements to obtain their unique piece, so be sure to visit each booth to find out all of the details.

Good luck and May the Force be with you!