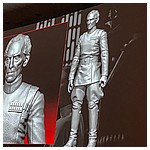 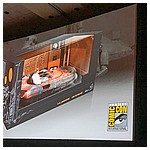 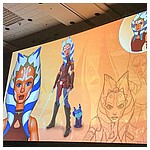 Mark Boudreaux started the session off with some amazing nostalgic Kenner items. He discussed how he made models out of cardboard and foam core. Prototypes had scale issues back then as well. The Tyderium shuttle was previously much bigger and then subsequently paired down to smaller model.

Mark then subsequently discussed some post Jedi pitches to Lucasfilm to continue the line after the movies. Some were trying to cover the prequel period, back in 1984. Kenner also had a production model Imperial Outpost play set and ESB concept for a Hoth "tow truck."

Hasbro unveiled an additional character, Ahsoka Tano with flocked loth cat. This character will have 11 POA and be available in August.

Hasbro noted that there are over 160 six-inch The Black Series characters produced so far. Hasbro expressed how grateful they are for the fan photos of their line. They see this as great feedback that the line is resonating with fans.

Hasbro then launched into the six-inch figure vehicles. Hasbro noted that there will be several on the horizon. For now the panel began with Luke's X-34 Landspeeder. There is a new sculpt for Luke's head with this unit. Hasbro also unveiled the San Diego Comic-Con version that has moving parts in the engine.

Some big reveals on the single figure line. These will be in the square boxes and not cardback. First up was a surprise, Grand Moff Tarkin. Nice sculpt of Cushing. Since he had no accessories in the movie he comes with an interrogation droid.

Following Tarkin, Hasbro showed us the fan's choice Jaina Solo figure. There was no actor to work off of for this one so they used a composite based on the likeness of Carrie Fisher and Harrison Ford. Hasbro split the look between Jedi warrior and pilot, so the helmet and flight jacket are removable.

Hasbro then showed off another SDCC exclusive, Grand Admiral Thrawn from Star Wars Rebels. He will come with exclusive packaging and an assortment of items including Commander Gree's helmet and the Holy Grail from The Last Crusade, an Easter egg on Rebels. Hasbro then noted that more characters from Rebels were forthcoming in this line.

Lastly, Hasbro briefly discussed Commander Gree, noting that he's has over 300 paint applications where the average figure has 90.

Closing out Hasbro showed a video revealing Project "Duffy". This turned out to be a reveal of The Vintage Collection returning in summer 2018. This is in the 3.75-inch scale and will be available at all retailers. It will be from all movies and shows. Hasbro wants to get back to making things like "freaky aliens". Best of all... they will be super-articulated.
SEND