Columbia Sportswear Company: Mysterious New Star Wars Jacket On The Horizon
Posted by Chris on November 23, 2018 at 06:47 PM CST
Star Wars jackets aren't anything new or necessarily hard to come by, but every once and a while, a company comes along and offers something pretty special that fans just can't live without. In 2017, we saw the entire Echo Base Jacket Collection sell out in mere minutes online and in the retail stores.

I was browsing the Columbia Sportswear Company website today and stumbled upon a countdown page very similar to the one they had up last year. At first glance, it really gives you almost no information to go on other than a date and time to expect a new jacket to become available online and in stores. However, the countdown is a rough video of the Hoth landscape through the lens of a pair of Macrobinoculars, so one would lean towards something related to The Empire Strikes Back. After intensely staring at the page for a minute, I started to see these quick flashes of color and decided to try and capture them for further review. 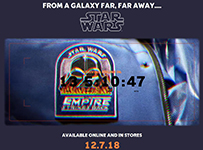 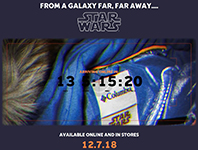 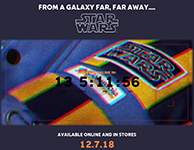 Nothing has been confirmed or officially announced yet, but I think it's a good bet that Columbia will be offering some incredibly popular jackets in the same style that the cast & crew wore while filming the Hoth scenes in Finse, Norway back in 1979! We'll keep watching for more details as they are announced and let everyone know what to expect come Friday, December 7th 2018 at midnight (Eastern).

For more info on the original parka that this new jacket appears to be based on, check out this great article by our friend Gus Lopez published on the official Star Wars website.
SEND