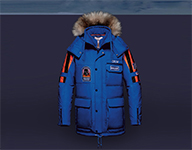 Columbia Sportswear Company: Star Wars Empire Crew Parka Officially Announced
Posted by Chris on December 3, 2018 at 11:21 AM CST
Two weeks ago, we let you know about a mysterious new jacket on the way from Columbia Sportswear Company. At that time, it was more of a tease since nothing official had been announced. Now, the official confirmation that we've been waiting on has finally come. Just like with previous Star Wars jacket releases, Columbia will be offering the Star Wars Empire Crew Parka both online, starting at midnight (Eastern), and in stores on Friday, December 7th. Customers will be limited to 1 per transaction.

 Darth Vader with flames embroidered chest patch is a replica of the emblem worn by the original crew
 Customizable name plate and Norwegian Unit patch allow you to identify yourself as a member of the crew
 Geographical coordinates of the Hardangerjøkulen Glacier film site are incorporated into the lining
 Sleeve stripes offer heightened visibility, while a rectangular Star Wars logo patch adds authenticity

Each jacket will retail for $500.00 and will be available in sizes ranging from XXS to XXL.

Check out the official product page right here which includes a list of Columbia stores that will be offering these jackets this week.

Additionally, a very limited amount of jackets will be signed by Mark Hamill with the proceeds going to charity only available at stores in Orlando, FL, New York, NY, Seattle, WA & Portland, OR.
SEND