Egmont: LEGO Star Wars Spot The Galactic Heroes Review
Posted by Jeremy on March 16, 2017 at 05:09 PM CST
Every been stuck somewhere with a small, restless child and wished with all your might that you had something to distract them? This is the book you were looking for!

Its glossy cover is exciting and inviting, and the finish on it would reject jam, cola and motor oil with extreme prejudice while the hardcover would laugh off any drops and knocks with an imperious chuckle. Simply put it'll last longer than your child's attention span.


Like the other books in the Search-And-Find Book series - These Aren't The Droids You Are Looking For and Spot The Spy Droid - has a number of kid friendly search-and-find puzzles on each page. But rather than find one particularly well-hidden character in a myriad of faces Spot The Galactic Heroes will have your child hunting down a number of core Star Wars characters. 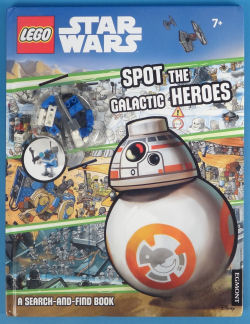 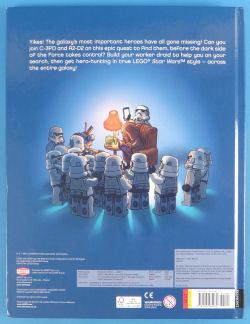 Unlike the other books this title only spans Episode IV to VII and totally ignores the Prequel Trilogy. In the typically lighthearted manner that we've come to expect from Ameet Studios, the book is filled with cartoony scenes from A New Hope (Wuher's Cantina and the Rebel Alliance base on Yavin IV), The Empire Strikes Back (Battle of Hoth and the bridge of the SSD Executor), Return of the Jedi (Jabba's Sail Barge at the Great Pit of Carkoon and a hanger on the second Death Star) and The Force Awakens (TIE Fighter launch bay on The Finalizer, the junk market at Niima Outpost and the Battle of Takodana). The only way these books could be improved is if they were printed on wipe clean paper because the artwork is too good to be defaced by a marker pen.

Poe and Finn's escape mission was my favourite because I found it really challenging. I really liked all the drawings because there were some funny hidden jokes in them. Spot The Galactic Heroes was a great book (well I did find the title a bit confusing because some of the heroes were really villains) and I would recommend it to everyone who reads Rebelscum.

As with Spot The Spy Droid, Spot The Galactic Heroes comes with a small LEGO set that forms a worker droid. Its appearance is distinctly Power Droid with added appendages, and has a more Star Wars look to it than the aforementioned spy droid. Though it's only 28 pieces it does add an extra level of value to an already affordable book. 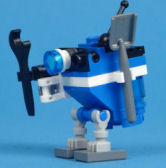 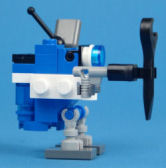 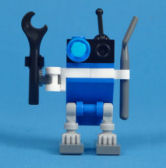