Scholastic: Spot The Spy Droid Book Review
Posted by Jeremy on November 13, 2016 at 06:28 AM CST
This is the kind of book that should be in every bank, hair dresser, doctor's surgery, travel agents and anywhere else that kids are forced to wait while their parents have to spend vital time pretending that their charges aren't being unruly.


This glossy hardcover book comes packed full of amazing illustrations that will titillate the reader's visual cortex and tease the frontal lobe of anyone - big or small. In the typical manner of those books that had us hunting for a bespectacled and scarved gentleman in the 80s and 90s (and you'll have to endulge me the opportunity to ask Where's WALL-E?), this Spot The Spy Droid pits the reader's cognitive skills against a myriad of confusing illustrations by Ameet Studios, the Polish publishing company who specialise in LEGO minifigure art work.

The art work was outstanding. The colours were really eye catching and the detail was off the chart. There were some really funny jokes in the minigames like a battle droid reading a newspaper. 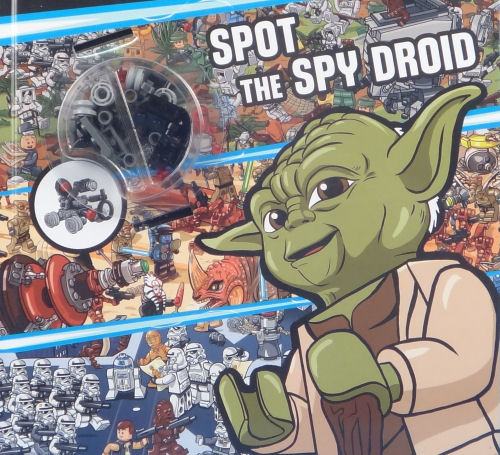 Rather than the normal "find character X" that these books generally pitch, the book eases the reader into the game with a more simplistic puzzle to solve, and then with each page turn the difficulty increases. (The eagle-eyed will notice that the book progresses along with the Saga, with popular planets and pivotal plot points depicted in chronological order.) There are also a number of mini quests on each page with additional subjects to find - some are pretty easy while others are deeply buried. There are also a number of Easter eggs tucked away on each page, creating an opportunity for readers to compare notes along the way.

I thought Spot The Spy Droid was fun, but it was hard to spot some of the differences on some pages. Others were really easy though. The separate spots were cool and there were ones that had minigames.

As part of the interactive nature of the title there is a small set that is supposed to add to and enhance each page, which have a new instruction bubble that correspond to the spy droid upgrading itself through the book. It's not particularly canon and looks more like a bomb disposal robot than a Star Wars droid. Considering the age of the book's intended audience it's a little simplistic, but for the price it does add an element of fun that most books of this nature (including the preceding These Aren't the Droids You're Looking For) wouldn't include at an affordable price. 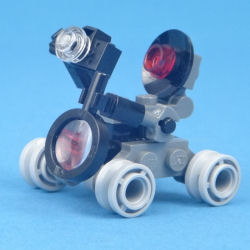 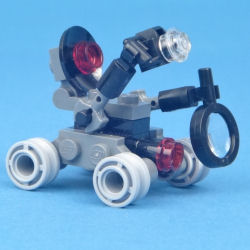 I thought the small LEGO spy droid set was cool but it was sort of useless really. It came in a weird clear circular box that was stuck to the front and meant I could open the book flat.

So there it is - a mixed bag of pros and cons according to Son of LEGOscum. From a parent's point of view this book works well to keep a small person busy for a good number of hours, and the puzzles are tricky enough to keep a big person just as deeply engaged. For the price of a couple of good cups of coffee this book is a great investment if you want a few hours of distraction.