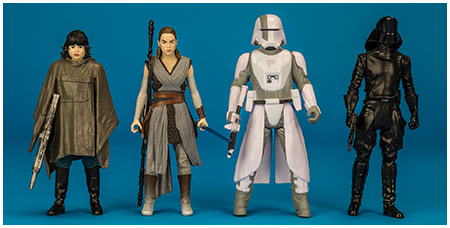 Following 2016's Takodana Encounter and 2017's Jedha Revolt, Hasbro released the Battle On Crait 3.75-inch action figure four pack featured on this page to coincide with the Blu-Ray release of the previous year's theatrical release. This set, which began hitting shelves in North America the first week of March, 2018, features a costume debut, a character debut, and two repainted action figures. The First Order Gunner features a completely fresh sculpt, the Rose figure repurposes the legs of the previously released Rose (First Order Disguise) on an otherwise unique sculpt, the Rey is a repaint of the Rey (Jedi Training) from the first wave of single carded The Last Jedi figures, and the First Order Walker Driver is a repaint of The Force Awakens First Order Snowtrooper.

Part of the support crew that keeps the Resistance star fighters flying, Rose has hated the First Order since she was a child. Now able to fight back against the enemy, Rose keeps her focus on her mission.

At long last, Rey has found Luke Skywalker, the last Jedi Master in the galaxy. Hoping to find a hero of legend, she must unlearn what she has learned as Skywalker challenges her expectations.

The First Order Gunners crew the heavy weapons emplacements that dot the surfaces of cruisers and installations.

The First Order unleashes enormous armored walkers into combat, manned by a crew of specialists coordinating the movements of the complex vehicles.

« Back To The Last Jedi Assortments