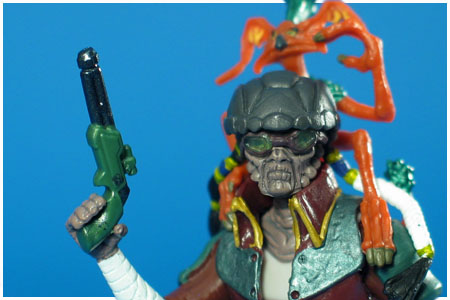 The Clone Wars Action Figure Collection
Wave nine of The Clone Wars in the "Shadows of the Dark Side" packaging featured five figures, of which the brand new Clone Commander Jet and a repack of Hondo Ohnaka from 2009 were numbered to follow on from the fifth and final wave of 2010. The remaining three comprised the shirtless version of Savage Opress, Plo Koon in Cold Weather Gear based on his appearance in The Clone Wars comic story arc In Service of the Republic, and lastly, a repaint of the ARF Trooper from 2009. Each figure in this assortment includes one of four randomly packed silver display stands, a Galactic Battle Game Card, and a blue six-sided die.