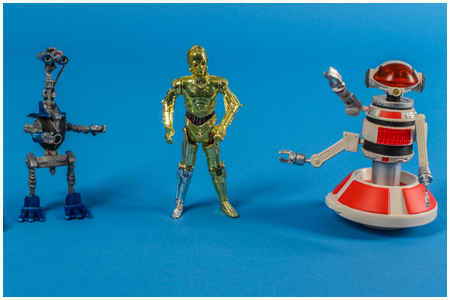 First announced on February 19th, 2013, this set boasts three figures based on characters featured in the reimagined Star Tours 3D ride. The Sector 2 Security boxed set includes a newly sculpted G2 Droid and suitcase along with a repaint of the 2002 Star Tours RX-24 (REX) figure and a repack of the C-3PO last seen in the 2012 Movie Heroes Rebel Heroes Battle Pack. This set, along with the Search For The Rebel Spy debuted at the 2013 Star Wars Weekend event at Walt Disney World.

The Star Tours Agency provides daily departures to destinations throughout the galaxy. Climb onboard the Starspeeder 1000 and let the journey begin!

What's In The Box?
About This Set
Related Figures