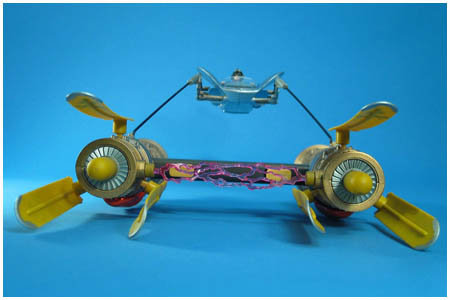 Episode I
The high speed, adrenaline-packed pod races in Mos Espa are immensely popular events for the local populace. The pilots of these pod racers must have lightning fast reflexes and nerves of plastisteel, especially for the Boonta Eve race at Mos Espa Arena. Here, Mos Espa's best maneuver through a perilous course that winds its way through narrow canyons and tunnels. Facing incredible odds and vicious competition, a victory for the young competitor Anakin Skywalker would make him Mos Espa's best pod racer.

Part of the initial release of Episode I products made available on May 3, 1999, the Anakin Skywalker's Pod Racer gave Star Wars fans an early look at one of the key events in Star Wars Episode I: The Phantom Menace. The vehicle came with an exclusive pack in Anakin Skywalker figure that was designed to fit into the Pod Racer and grasp both of the driving sticks. The toy itself featured a handle portion with two triggers that allowed the user to open the flaps and steering fins on each engine.

What's In The Box
About This Vehicle

Back To Episode I