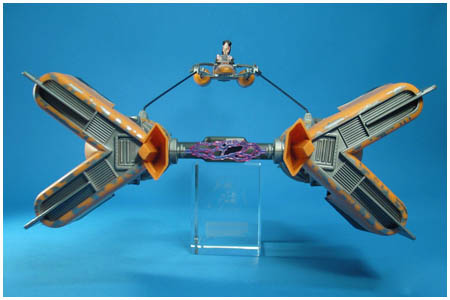 Episode I
It is said that in all of Mos Espa, there is no better pod racer than Sebulba. A member of the Dug species, Sebulba is feared by his competitors for his aggressive racing tactics and nerves of plastisteel. Sebulba's success is due much to the fact that he will do whatever necessary to win, even if it means resorting to dirty tricks. His high performance pod racer is packed with certain "illegal" modifications used to eliminate fellow racers. On Boonta Eve race day however, a young competitor named Anakin Skywalker will give the infamous Sebulba a run for his money.

Part of the initial release of Episode I products made available on May 3, 1999, the Sebulba's Pod Racer gave Star Wars fans an early look at one of the key events in Star Wars Episode I: The Phantom Menace. The vehicle came with an exclusive pack in Sebulba figure that was designed to fit into the Pod Racer and grasp the controls. The toy itself featured a handle portion with a trigger that allowed the user to activate a cartoonish spring out spinning blade on the side of the left engine.

What's In The Box
About This Vehicle

Back To Episode I