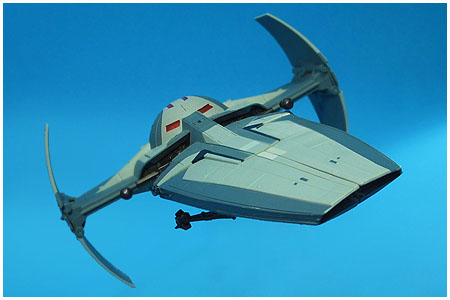 Movie Heroes Series 1 Vehicle
With 2012 being the year of Star Wars Episode I: The Phantom Menace, it was to be expected that we would be seeing some reissues along with the newly-sculpted figures, and Hasbro delivered in their Movie Heroes line with the announcement at New York Comic-Con 2011 that four Class II attack vehicles from the movie would feature as part of their big street date release of 30th January 2012.

With the poster for the theatrical release of The Phantom Menace 3D prominently featuring Anakin Skywalker and Sebulba's podracers, it came as no surprise to see both of those being made available for the first time since their original release back in 1999. The same perhaps could also have been said for Darth Maul's Sith Infiltrator, given the focus that was being placed on his role in the movie, and let's not forget the Zabrak's return in The Clone Wars a few months later. Rounding out the set is the AAT, which we've seen on numerous occasions, since it first hit shelves in the original Episode I line, albeit entitled Trade Federation Tank.

Released in the Darth Maul branded packaging that spanned the Movie Heroes, The Clone Wars and Walmart's exclusive Discover the Force lines, all four vehicles were featured in scenes reminiscent of the movie on the front of the box.