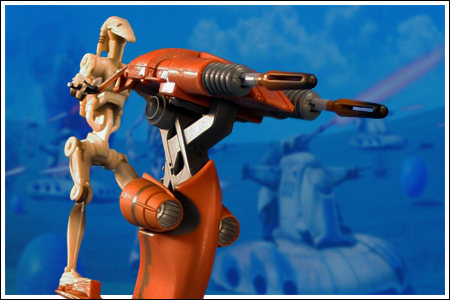 With Battle Droid
As part of the big release of January 30th 2012, to support the release of Episode I: The Phantom Menace in 3D, the first wave of Class I Fleet Vehicles, which were revealed at New York Comic-Con in November 2011, comprised the Sith Speeder with Darth Maul, BARC Speeder with Phase II Clone Trooper, Naboo Royal Fighter with Obi-Wan Kenobi and STAP with Battle Droid, with all four being repaints of vehicles and figures from previous lines.

Back To Movie Heroes Class I Fleet Vehicles