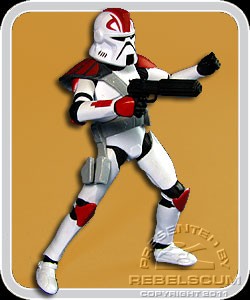 Comments: Celebrate the legendary Star Wars saga that changed the universe forever! This collection brings to life the incredible story of good versus evil that captured our imagination and took us to a galaxy far, far away. Iconic Star Wars heroes and villains are captured with incredible detail and premium features to commemorate each epic tale in the Star Wars saga. May the Force be with you!

• This clone trooper designated ARC-77, but he is better known as "Captain Fordo", who appeared in the Clone Wars micro-series. In season 1, Fordo originally wore phase 1 ARC Trooper armor with red flashes, identifying his rank. In season 3, he wore unique armor during the Battle of Coruscant. Although this figure comes dressed in the armor from season 1, the basic deco indicates that it is meant to represent the armor from series 3.