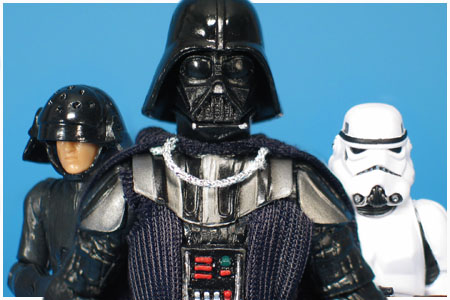 Special Action Figure Set
Following sufficient interest in the first three Target Exclusive Star Wars Vintage Collection Special Action Figure Set of three packs that came together as a complete set of nine figures, Hasbro revealed during their presentation at the New York Toy Fair in 2011 that a second wave would be released, though this time as three individual three packs. Picking up where the first sets left off in reliving the nostalgia of the original Kenner three packs, each pack featured the same combination of figures found in the corresponding vintage set, with Villain and Hero sets in Star Wars packaging and a Rebel set from The Empire Strikes Back. These sets began appearing in stores around May 2011, priced $19.99 each.
Death Squad Commander