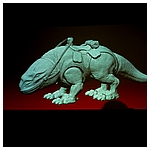 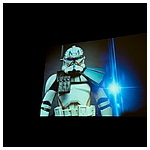 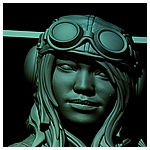 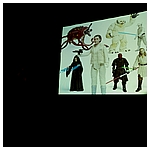 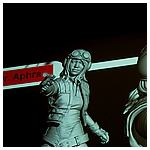 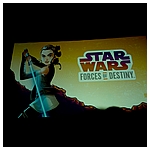 Andy Ochiltree (brand marketing) opened up the session and introduced his team. He discussed the phenomenon that was Force Friday in 2015 and how he expects it to be even bigger this year. There is no news for Force Friday 2 at this point but he said there are a fair amount of announcements forthcoming as we get closer.

Andy opened and showed off all the convention exclusives that were available for sale to attendees. He highlighted what sets the SDCC version of Luke Skywalker's Landspeeder apart from the version available for wide release in the fall. The SDCC version features premium packing (one of the finest quality packages Hasbro has produced), finer quality tunic on the soft goods, and more deco in the engine as well as moving parts. The obvious difference with the Grand Admiral Thrawn exclusive is the accessories, once again Hasbro drew attention to the holy grail.

Next Steve Evans (design director) spoke about that awesome diorama you were all admiring in our photo gallery. He noted the hundreds of man hours between builders that went into this sets. Sam Smith (design manager) explained that the diorama tells a story and has a clear start and end. Hasbro used their 3D printers but had to work in between times the printers were used for normal business functions. He talked a little about the Millennium Falcon and mentioned how it was composed of more than 60 sections and featured a fiber optic cockpit where every switch lights up.

Hasbro began a fun game of what's missing from the diorama. Audience members correctly guessed, the Rebel Fleet Trooper! Hasbro showed us the new design for the character that will be available in late 2017. He will have a removable helmet and include the Death Star data card from Rogue One.

Continuing with the game, Hasbro focused on the sandtrooper scene and asked what was missing again. Some people wondered if it could be Owen and Beru, some thought perhaps the Krayt dragon, and others correctly guessed the dewback! This guy will not be available until 2018. He has an articulated mouth and tounge!

Hasbro then showed a fan request favorite... Captain Rex Phase II! Describing the detail, Hasbro noted the weld marks on his phase 2 armor and the kill count on his head. He also has a removable helmet.

Hasbro also showed us the new The Force Awakens Resistance Base Rey side-by-side with Captain Rex to show off the new face molds based on scans.

Hasbro had some photos of Leia in various costumes including Leia Hoth, Endor, and General. Hasbro made mention to say that there are a lot of great designs to work with, suggesting we may see some of these in the future. Hasbro then showed us the new General Leia figure that features a removable jacket.

Hasbro rounded out the six-inch segment with the reveal of The Force Awakens Maz Kanata. This figure includes an openable chest with details inside and a removable lightsaber. Her goggles also articulate and move on and off her eyes.

Kevan Maciver (global brand team) and Sam Smith opened by introducing Hoth Lea. They immediately said this was part of a Hoth theme. Next up was Hoth Luke Skywalker with articulated wampa featuring removable arm and then Darth Vader and probe droid. In the same slide, Hasbro officially unveiled the Rathtar, who jokingly escpaed his cage early at SDCC preview night, then showed us the Han Solo and Boba Fett two-pack, and Qui-Gon Jinn and Darth Maul two-pack featuring articulated wrists and a break apart saber for Darth Maul. Lastly, a final addition of Emperor Palpatine featuring a PVC cloak and swappable lightening hands.

Steve then chimed in and said this line will be about a conversation with the fans. Hasbro wants to know what things we want. He said he checks certain websites and forums every morning. Steve reiterated that he wants to plan this line with fans and not for them. He then noted that Rey will be the first character in the line VC116. Not numbered but also part of the line will be Kyle Ren, First Order Stormtrooper, Doctor Aphra, and Rebel Hoth Trooper. Hasbro is still finishing the sculpts on Doctor Aphra but noted that she will feature a removable vest. The Rebel Hoth Trooper is from the Legacy three-pick and will not feature a beard.

There are also five figures based on the new movies (possibly The Last Jedi) that were mentioned but not revealed.

Next were shots of characters from Rogue One including Jyn Erso, Cassian Andor, a Death Trooper, and a Assault Tank Driver. The package will feature a double chrome bar.

Hasbro then noted that the line will feature vehicles as well with vintage-style boxes. First up will be the Imperial Assault Tank in 2018. Hasbro noted that the vehicle may not include figure because all of the money for the production was put into the design. It is made to the correct scale, features working treads, and is super detailed to the point of including a coffee cup for the tank commander (no joke it was in the Lucasfilm archives). At least one of the containers on the back opens up exposing the kyber saber containers, which also open allowing you to remove the cores.

These items were not available for display but a Hasbro rep seemed to indicate that we will see these in New York either at Comic Con or Toy Fair.

Emily Cantelupe (senior product designer for the Force of Destiny line) opened up by highlighting the features of this 11-inch line. She discussed the action features in characters like Rey that has a lightsaber slashing feature when you squeeze her legs. Next up was a Padmé Amidala reveal featuring her pilot costume from Attack of the Clones and blaster pointing action feature.
SEND