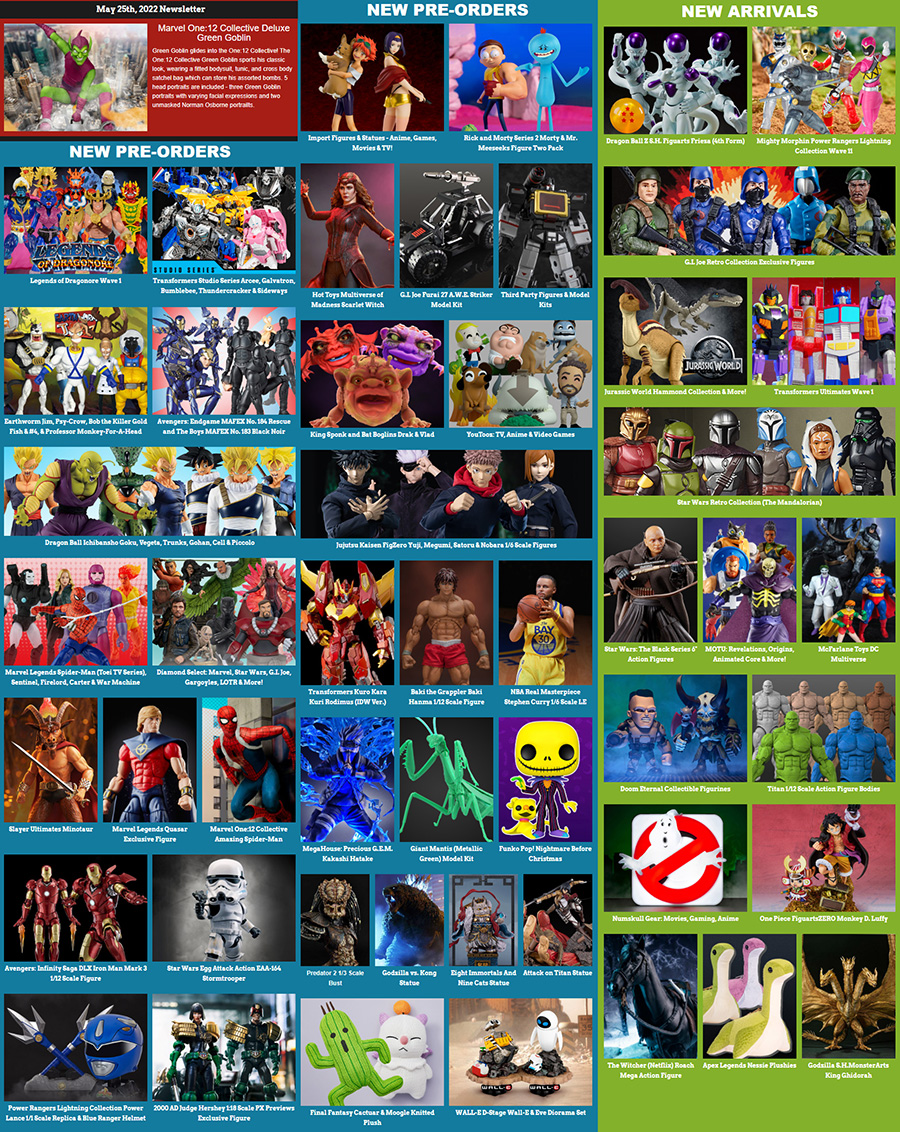 --------------
NEW PRE-ORDERS
--------------
Green Goblin glides into the One:12 Collective! The Legends of Dragonore figures are here and ready for you to pre-order! Studio Series has always allowed fans to reach past the big screen and build the ultimate Transformers collection inspired by iconic movie scenes from the Transformers movie universe  be sure to check out the newest releases! Earthworm Jim, #4, Psy-Crow, and Professor Monkey-for-a-head have taken a detour back to earth! Rescue from Avengers: Endgame and the mysterious Black Noir from The Boys have joined the MAFEX figure line! Bandai Spirits Ichibansho is proud to announce their newest releases featuring Dragon Ball's Super Saiyan Goku, Piccolo, Cell & more! Hasbro brings Spider-Man from the Toei TV series, Firelord, Sentinel, Sharon Carter, and War Machine to the Marvel Legends figure line! The latest 7 scale ULTIMATES! Figure immortalizes the iconic heavy metal beast from the cover of Slayer's game-changing 1983 debut album Show No Mercy! Donning a pair of Quantum Bands, Wendell Vaughn transforms into Quasar, the Protector of the Universe  now available for pre-order! Part time student, scientist, and photographer - full-time superhero with arachnid abilities, Peter Parker swings onto our featured pre-orders page from Mezco Toyz! threezero and Marvel Studios are excited to present the DLX Iron Man Mark 3 as the next figure in the Marvel DLX series! Introducing the indispensable villain in Star Wars - the Stormtrooper- as an Egg Attack Action figure! Channel the Blue Ranger with the Lightning Collection wearable helmet and Power Lance! The future's greatest lawman needs a bike powerful enough to patrol the streets of the mega-city and he's got it with the newest Judge Dredd figures from Hiya Toys! Ed, Ein, and Faye Valentine are now available as Pop Up Parade figures! Im Mr. Meeseeks! - Mondo is back with Series 2 of their Rick and Morty collectible figure series featuring Morty and Mr. Meeseeks! Continuing the Doctor Strange in the Multiverse of Madness collection, Hot Toys is excited to present today the 1/6th scale collectible figure of The Scarlet Witch! The Flame Toys Furai line of model kits continues with the G.I. Joe A.W.E. Striker! Check out the newest releases of third-party figures and model kits! Boglins are back in their original size and cages, but they have evolved! YouTooz has released a plethora of vinyl characters from our favorite TV shows, anime, and video games! The Kuro Kara Kuri line continues with the IDW version of Rodimus! Proudly presented and produced by Storm Collectibles, the 1/12 scale action figure of Baki Hanma is now available for pre-order! Enterbay has brought Stephen Curry off the court and into 1/6 scale! New pre-orders are available from MegaHouse like the Precious G.E.M. Kakashi Hatake! Add the Giant Mantis to your model kit collection! This is Halloween, this is Halloween  well, the holiday may not be here yet but the Nightmare Before Christmas Funko Pop! figures are! Check out new statues and busts from brands like Predator, Godzilla vs. Kong, Attack on Titan & more! Snuggle up with the adorable Final Fantasy Plush Cactuar and Moogle! WALL-E and Eve have been released as a D-Stage diorama set from Beast Kingdom!

------------
NEW ARRIVALS
------------
Frieza's 4th form is now available and in stock as an S.H.Figuarts figure! The Mighty Morphin Power Rangers Lightning Collection features newly stocked items like the Wave 11 set of figures! With the newly arrived Retro Collection items from Hasbro, fans can imagine exciting action and adventure from the pulse-pounding world of G.I. Joe! Featuring your favorite characters and dinosaurs from the Jurassic Park franchise, the Hammond Collection brings you fully articulated figures in 3.75-inch scale  now in stock! Super7s Wave 1 of Transformers Ultimates are now in stock! Kids and collectors alike can imagine the biggest battles and missions in the Star Wars saga with The Mandalorian Wave 2 set of figures from the Star Wars Retro Collection! Be sure to check out the newly arrived Star Wars: The Black Series 6 action figures! It's a thrilling time to be a Masters of the Universe fan with plenty of Mattel figures now in stock! More figures from McFarlane Toys DC Multiverse series have arrived! The Doom Eternal Marauder and Soldier have arrived from Numskull! The now in stock 1/12 scale Titan action figures from Maven Collectibles will add a whopping presence to any collection! Gear like the Ghostbusters logo lamp, Back to the Future charging dock, My Hero Academia gaming locker and more are now in stock from Numskull! The One Piece FiguartsZERO Monkey D. Luffy (WT100 Commemorative: Daikaizoku Hyakkei) is in stock with lots of other FiguartsZERO items featuring some of our favorite anime characters! A one size fits all name, Roach is now in stock as a Mega Action Figure from McFarlane Toys! Snuggle up with the in-stock Apex Legends Nessie Plush! The fearsome King Ghidorah, as seen in the 2019 film Godzilla: King of the Monsters has arrived as a S.H.MonsterArts figure!