BBTS Sponsor News: Back to the Future, Joker, Gundam Universe Sale, G.I. Joe, MOTU, Mandalorian, Lady Death, Dinosaurs & More!
Posted by Philip on May 14, 2020 at 06:40 AM CST
--------------
NEW PRE-ORDERS
--------------
This week we have the Ultimate Back to the Future figures from NECA featuring Marty and Biff. Prime 1 Studio is bringing out a Joker statue from the 2019 film. Six figures in the Gundam Universe line are now on sale ranging from $16.99 to $19.99. Snake Eyes was revealed to be the fifth figure in the first wave of the G.I. Joe Classified series. Two Power-Con 2020 exclusives are now available for pre-order with She-Ra and the Lords of Power five-pack. Lady death was popular this week, getting both a 1/12 scale figure and a statue as well. Another popular statue line this week is the Bishoujo series from Kotobukiya. Pennywise from the 2017 IT film and NYCC 2020 PX Previews exclusive Phoenix can be pre-ordered now! Finally, if you are searching for a duck version of your favorite characters, TUBBZ are here and have got you covered. Characters from your favorite films, video games and comics have been turned into ducks! Each duck features hand-inked effects and comes packaged in a fun displayable tub. 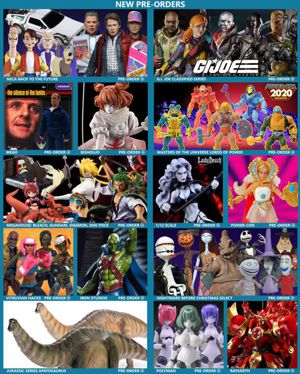 ------------
NEW ARRIVALS
------------
The hottest arrival this week has to The Child from the Star Wars: The Black Series line. Not to be outdone though, the highly anticipated DLX Optimus Prime featuring screen-accurate detailing, 53 points of articulation, LED illuminated eyes, and die-cast metal parts is here as well! Two Bishoujo statues, Poison Ivy and Baroness, are also here to hold us over until those new pre-orders get here! MAFEX Cyclops featuring his classic blue and yellow costume, from Marvel's "X-Men" comics, is ready to join your collection. Fans of Final Fantasy, Kingdom Hearts, and NieR will be happy to see Bring Arts figures arriving for each of those game franchises. Numerous Star Wars model kits are back in stock and if anyone is looking for a frightening monster that transforms into a cube, the MegaBox Alien Queen will suffice! 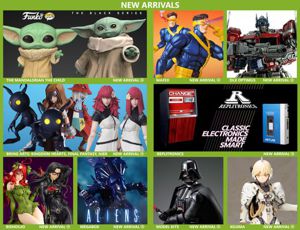