BBTS Sponsor News: Sega, Halo, TMNT, NECA, Mortal Kombat, Avatar, MGS, Gremlins, G.I. Joe & More!
Posted by Philip on July 29, 2020 at 10:56 AM CST
--------------
NEW PRE-ORDERS
--------------
This has been an absolutely packed week with all of the new reveals. One of the hottest items this week is a set of figmaPLUS accessories featuring 5 of SEGA's consoles with their controllers and video games: Master System, Genesis, Game Gear, Saturn, and Dreamcast. Fans eager for the next Halo video game can pre-order the NERF MA40 Motorized Dart Blaster! Straight from the classic colored comics by Eastman and Laird come the Teenage Mutant Ninja Turtles Elite Series action figures from Playmates! Sniper Wolf is back with a resissue of the Bishoujo statue from Metal Gear Solid. Count down to Halloween or Christmas with your favorite Mogwais and Gremlins using the Gremlins countdown calendar. Celebrating its 10th anniversary, Beast Kingdom has teamed up with Blizzard to launch the D-Stage selection of classic Starcraft II characters. TBLeague is bringing out a 1/12 scale figure of Death Dealer based off the art of Frank Frezetta. Doc Brown is joining Marty and Biff in NECA's Ultimate figure series. 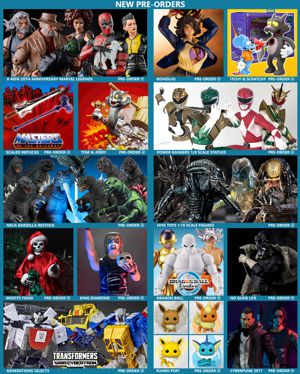 ------------
NEW ARRIVALS
------------
Tons of new arrivals are here! Wave 4 of the Power Rangers Lightning Collection is now available with the set and three singles. Gamers, be sure to check out all the lights, coasters, mugs and other gear from Paladone. Cosmic Ghost Rider from the Marvel Legends Series is also now available. From the upcoming Cyberpunk 2077 video game, pick up Keanu Reeve's character Johnny Silverhand! Anyone looking to complete their cosplay of Asajj Ventress can grab the highly detailed Asajj Ventress collectible lightsaber that features authentic sound effects, a real metal hilt and includes a specially designed display base. Back in stock is the Ultimate Part 2 Freddy which has plenty of gruesome detail and tons of accessories, including three interchangeable heads, 2 dogs, gloved hand, monster hand, and removable hat. From the Amazing Yamaguchi action figure series with insane poseability, Wonder Woman is ready to defeat any villains that stand in her way. Anyone looking for new board games, relive the excitement of the Garbage Pail Kids trading cards in a whole new way with the Monopoly game. 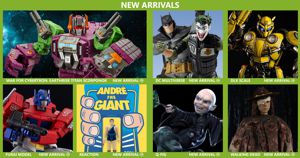