BBTS Sponsor News: Transformers, G.I. Joe, TMNT, Batman, Power Rangers, Nintendo, My Little Pony, Macross, Godzilla & More!
Posted by Philip on July 1, 2020 at 04:11 PM CST
--------------
NEW PRE-ORDERS
--------------
This week saw tons of great new products from Super7's TMNT Ultimates to the G.I. Joe Classified Series to the My Little Pony Ghostbusters Crossover Collection Plasmane. New Micromaster and Battle Master figures have just gone up. Two waves of World of Nintendo figures up with sets and some singles. For Kotobukiya, two new Hexa Gear model kits have debuted along with a new Persona ArtFX J statue and a limited edition Bishoujo Pinkie Pie statue. Three new Macross Saga Retro Transformable Collection Valkyries are ready to transform and join your collection. For fans of insects and hornets in particular, Kaiyodo's RevoGeo series will be coming out with an articulated figure of the Asian Giant Hornet. Third party fans can pick up Planet X's Project Genesis for 43% off. It's been awhile since we've seen some Five Nights at Freddy's figures but Funko has five new figures to pick up. Lastly a 6-inch figure of The Little Prince is being made by Boss Fight Studio. 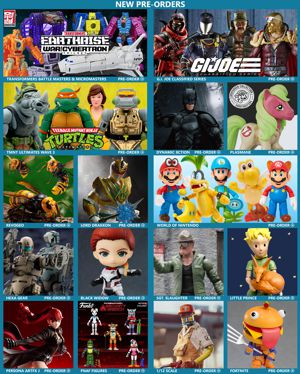 ------------
NEW ARRIVALS
------------
Anyone looking for great deals will find them with the six Gundam Universe figures that are in stock and on sale! On top of that, figures from the Kaiyodo revolmini sale are also in stock.

Four X-Men Marvel Legends figures are here from the Sugar Man BAF wave: Dark Beast, Jean Grey, Sunfire and Weapon X. Aliens Ultimate Rhino Alien is ready to ship and frighten anyone and everyone. For anyone seeking a fun project, tons of Star Wars model kits are not in stock. S.H.Figuarts Thanos from Infinity War is here and ready to take on the Avengers with the infinity gauntlet! 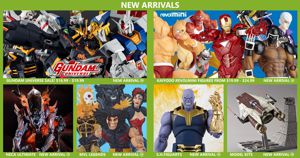