BBTS Sponsor News: X-Men, MOTU, LotR, Wonder Woman, King Kong, Godzilla, Cable, Power Rangers, TMNT & More!
Posted by Philip on July 15, 2020 at 10:29 AM CST
--------------
NEW PRE-ORDERS
--------------
Four new X-Men Marvel Legends figures have been announced with Wolverine, Mystique and a two-pack of Magneto and Professor X. Three packs from Mattel's Little People Collection are now up from Masters of the Universe, The Lord of the Rings and The Office! Kotobkiya is bringing out an awesome model kit of Wonder Woman along with an ArtFX statue from the upcoming Wonder Woman 1984 movie. Both of Mezco's King Kong of Skull Island figures (regular and PX exclusive) are being rereleased. The S.H.MonsterArts of Godzilla from Giant Monsters All-Out Attack will be the heat ray version. Prime 1 Studio has some cute vinyl figures from DC and Berserk to start their Cutie1 series. The Amazing Yamaguchi series continues with Marvel's Cable as the 20th figure. MOTU fans can now pre-order Man-at-Arms in 1/6 scale! From NECA, the TMNT Casey Jones mask is back up for pre-order and images are now in for the next wave of ReAction figures from Super7. Kotobukiya's next statue in the Bishoujo line is Black Cat Steals Your Heart! Board game fans be sure to check out the new card game of the hilarious comic series Strange Planet. 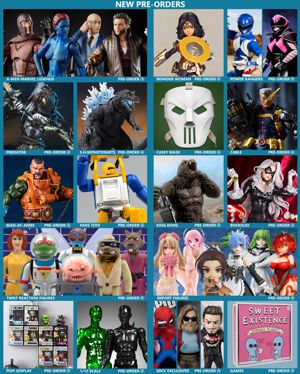 ------------
NEW ARRIVALS
------------
TruForce Collectibles Mega Man X figure is now here and features dieicast armor, LED functionality in the X Buster with red LED, swappable face and hand parts, customizable effects parts and over 30 points of articulation to help you recreate all of X's iconic poses! S.H.Figuarts Iron Man Mark LXXXV, as seen in final battle of the epic Avengers: Endgame, is now in stock and includes an optional Tony Stark head, four pairs of optional hands, energy blade part, repulsor effects, nano lightning refocuser, lightning refocuser effect parts, nano shield part. Two Bishoujo statues have arrived with Supergirl and Dark Phoenix. Hot Toy's Aquaman from the movie of the same name is ready to ship and features an accurate likeness of actor Jason Momoa. DBZ fans, be sure to grab the S.H.Figuarts Yamcha figure! Another 1/6 scale figure that arrived this week is Zorro based on The Mask of Zorro film. X-Men's Beast from the Marvel Legends Retro Collection is here and ready to devote his time to expanding the frontiers of human knowledge. 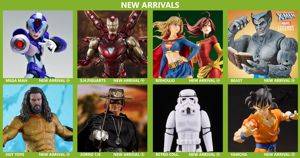