Celebrate Star Wars: The Rise of Skywalker With New Collectible Coins
Posted by Jeremy on September 27, 2019 at 02:22 AM CST
Its a big year for Star Wars with the upcoming release of Star Wars: The Rise of Skywalker, The Mandalorian, and the game Star Wars Jedi: Fallen Order being honoured on October 4th with Triple Force Friday. The day will see the release of a swath of new merchandise - including these two gold and silver commemorative coins - and New Zealand Mint is giving Rebelscum readers the first look! 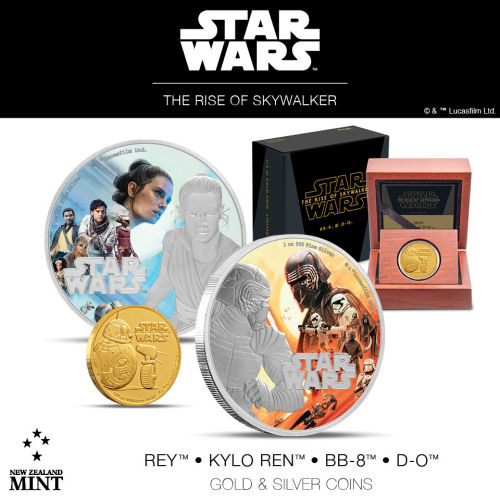 The pure silver coins combine engraving and colour and capture the essence of this epic struggle. One coin reflects the light side, the Resistance, and heroes Rey, while the other focuses on the dark side, the First Order, highlighting the warrior Kylo Ren.

The gold coin celebrates the delightful droids who feature prominently in all Star Wars movies with well-loved astromech droid BB-8 and his new friend D-O. Both are engraved alongside the name of this final movie in the Star Wars saga.