Thursday April 16th thru Sunday April 19th
All panels are in room 210AB unless otherwise noted.

The Star Wars Collectors' Social Room (210D) and The Rancho Obi-Wan Experience with Steve Sansweet (Hall A) are open all day. 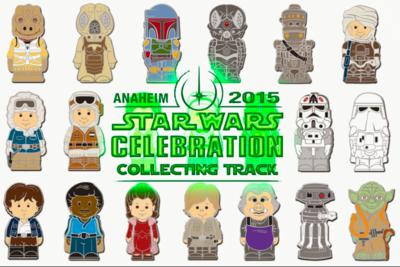 BONUS PANELS AND EVENTS IN THE COLLECTORS SOCIAL ROOM (210D)

French Collectibles - Stephane Faucourt
Thursday 11am
Based on his La French Touch book, Stephane Faucourt reviews the French merchandising and various products categories marketed in France between 1977-1986. This panel will feature product photography from a selection of major items and advertising / marketing material, a review of the popular Meccano and Trilogo action figure toy lines, as well as a brief coverage on the movies reception in France as discussed in Press / magazines at that time.

Mexican Collectibles "Unraveling mysteries of Lili Ledy"  Luis and Josefina Galvez
Thursday 2:45-3:45
Nowadays there are still many questions about the line of Star Wars toys produced in Mexico, in this panel Luis and Josefina Galvez review the Lili Ledy collectibles produced in the 80's, further topics such as variations, rarity of figures, interviews with former employees of Lili Ledy and finally an expected visual tour of the production process at the Lili Ledy factory, which ensures that even expert collectors learn something new.

SCANDAL! A History of Frauds, Fakes and Scams in the Collecting Hobby - Jason Smith
Friday 12pm
The Star Wars collecting hobby has a dark side - a side where predators lurk. Through the years these villains have preyed upon the community, enticing unsuspecting innocents with fraudulent collectibles. Join us as we candidly discuss some of the most egregious offenders, and arm yourself with the knowledge you can use to avoid becoming another victim.

Collecting Track Swap Meet
Saturday Apr. 18 7:00 - 9:00 pm
Collectors will have a chance to sell/trade their collectibles, or just mingle with other collectors. Selling is limited to just a handful of items per person though (what you can carry), so collectors should plan accordingly.

MarketWatch - The Economics of Star Wars Collecting - Peter Fitzke
Sunday 1:30pm
Ever wonder why vintage Star Wars toys are so valuable today? What lead to this phenomenon, what is the future of Star Wars collecting, and will they continue to appreciate in value? "Fratastic" Pete Fitzke of the Star Wars Collectors Archive MarketWatch Blog demystifies these questions and more as he takes you through the science and real life examples of how these soared to such lofty prices in the marketplace. Taking a page from his monthly blog, along with a very loose response to the C6 panel "The End of Star Wars Collecting," Pete talks about the current trajectory of toys, the different eras of toys and where he sees the hobby going in the next 5-10 years and beyond.
SEND