Denny's Goes Solo This April
Posted by D. Martin on April 2, 2018 at 03:31 PM CST
Since sharing the announcement that the chain of full-service family restaurants were partnering up with Lucasfilm, Denny's has been getting ready to launch their new Solo menu.

So on April 2nd, Rebelscum attended the Denny's press launch at El Capitan Theatre in sunny Hollywood to witness the grand unveiling of all their new treats first hand, and we're sharing them with you. Hit up the gallery below to see what's coming to a diner near you. 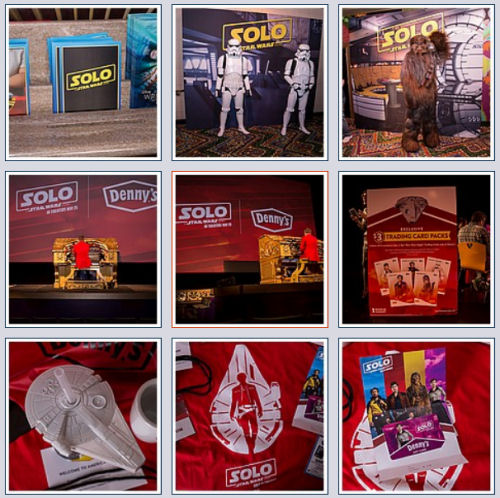 And by dining at Denny's you can be a force for good in the galaxy, because they are partnering up with No Kid Hungry to help kick childhood hunger into outer space.

In order to do so Denny's and Lucasfilm have designed a special Solo: A Star Wars Story trading card pack and a portion of the sales of which will go to No Kid Hungry. to help provide meals to children in need. 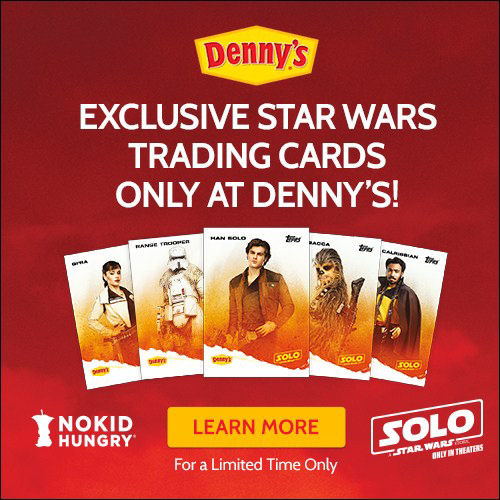 Each exclusive Solo: A Star Wars Story trading card pack, only available at Dennys in-store and via Dennys on Demand, includes two of 12 different character cards, featuring Han Solo, Chewbacca, Qira, Lando Calrissian and more, in addition to a Dennys coupon for future use.

And if that wasn't enough Star Wars diners can also fuel up with their crew with Dennys movie-inspired menu, featuring bold new items such as Co-Reactor Pancakes, Blaster Fire Burger, the new Two Moons Skillet and Dennys Lightspeed Slam. All washed down with their favorite beverage in one of Dennys Limited Edition Solo: A Star Wars Story collector cups featuring characters from the film and topped with a Millennium Falcon lid. 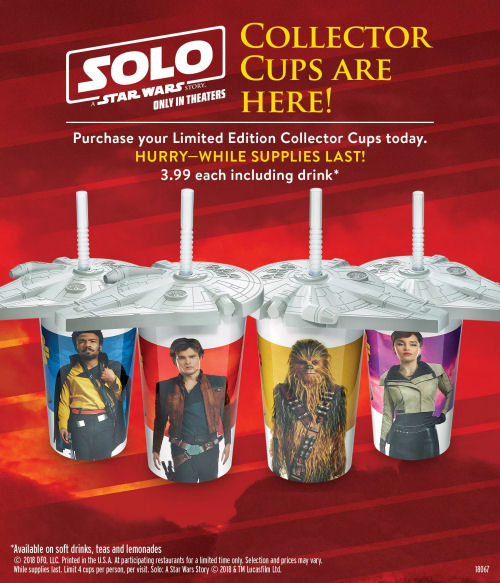 If all this doesn't get your tummy rumbling check out the new TV spot!


And the when and where? April 3rd at your local Denny's restaurant, and not a long time ago, in a galaxy far, far away.

With five more partners locked in for a special marketing campaign, we can't wait to see what cards Esurance, General Mills, Nissan, SOLO and Symantec have up their sleeves for us.
SEND