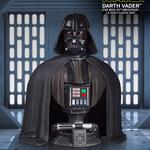 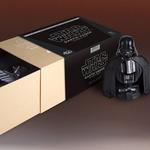 Once a powerful Jedi Knight, Darth Vader was consumed by the Dark Side of the Force to become a dreaded Sith Lord of the Galactic Empire. Enforcing the evil will of the Emperor, Vader seeks to crush the Rebellion. Lord Vader is so determined to thwart the Rebel forces that he eventually takes to his own custom T.I.E. Fighter to join the fight and defeat the Rebels ragtag fleet.

Depicted as he appears in Star Wars Episode VI: A New Hope, the Gentle Giant Ltd. 1:6th scale Darth Vader Classic Bust combines the timeless aesthetics of sculpture from Greek and Roman antiquity, with one of popular cultures most recognizable characters. Added to the base is Darth Vaders iconic lightsaber hilt, the preferred weapon of the Sith.