Hasbro began by expressing their gratitude and excitement for the barge hitting its target. Steve Evans then gave his personal barge to a lucky young member of the audience (well a promise of it when it hits release next year).

Some looks at the series 5 and 6 blind bags. Hasbro is also excited about adding vehicles to the line with secret secondary functionality, nothing further revealed here.

We got a look at some of the new figures coming later this year.

We began with a discussion of 2019 being the 20th of The Phantom Menace. Naturally there will be some prequel love. We are going to see lightsabers from EP1 Obi-Wan, Mace Windu, and Darth Maul. Darth Maul's lightsaber will be a single blade but you can buy two and connect them to form the double-bladed version.

Steve Evans hinted at some prequel the Black Series reveals but these will be announced at future conventions.

The first the Black Series reveals focused on Rebels. We got to see Ezra, with a triple ball jointed neck, and Chopper. Yes, his arms do fold into his head.

Hasbro then pivoted to focus on exclusives. Canadian ToysRUs Captain Phasma with long spear will be a Disney Store exclusive in the US. Of note, this figure features photo realism in its one revealed eye. Moloch will be coming to Target and be "quite a large figure." Previously leaked General Veers is coming to Walgreens. Princess Leia Bespin escape is coming to Target. Lastly, Zuckess (former ToysRUs exclusive) is coming to the Disney Store on November 1st.

Hasbro then surprised us with a new initiative the Black Series Archive. Hasbro plans to announce four to eight previously released figures per year to get a second run on a blister card. The photo real deco now used in the line will be applied to human faced characters moving forward, starting with the Luke Skywalker X-Wing Pilot in the first run.

We got an official look at the Walmart exclusive TIE Fighter that will be available this fall. Additionally, we got several reveals of upcoming figures. Finally, Hasbro surprised us with the announcement that photo realism from the six inch line is coming to the Vintage Collection.

Starting in 2019, Hasbro will be adjusting their waves to help improve distribution. There will be less waves with more new figures per wave. Bottom line, less repacks. They asked for understanding that when an issue is discovered, it can take 12 to 18 month to correct. Which is why we will not see this new strategy take root until next year.

Hasbro reiterated that reveals of other figures are coming soon but you will have to tune into other conventions to hear about them. They highlighted New York Comic Con, FanExpo in Canada, and Unboxing Toy Convention in Mexico City (Tune back to us for coverage of these events).

Someone asked about the release of the Black Series Rio Durant. Hasbro said it will be available in the December 1st wave for a retail price of $19.99.

Fan polls are still a possibility for the future but right now Haslab seem to be the vehicle to engage the fans.

There are plans for Clone Wars toys and Steve Evans is soliciting input.

There was a strong hint that a Rebels the Black Series Zeb reveal is coming soon.

No further information on when the Canadian the Black Series Stormtrooper with blast accessories will be available in the US.

Someone asked if Hasbro would consider producing the Black Series R2-D2 without mold lines on the dome as part of the Archives series, and Hasbro said they would consider it.

Legends figures are still being considered as Hasbro aims to balance core characters with niche and comic characters but fans should not expect a whole line of Legends.

There was a strong hint that the Black Series Doctor Aphra will be announced soon.

Lastly, an Entertainment Earth representative let us know that after the panel the Maz Kanata Hologram multi-pack previously exclusive to Canada, will be available on their website. 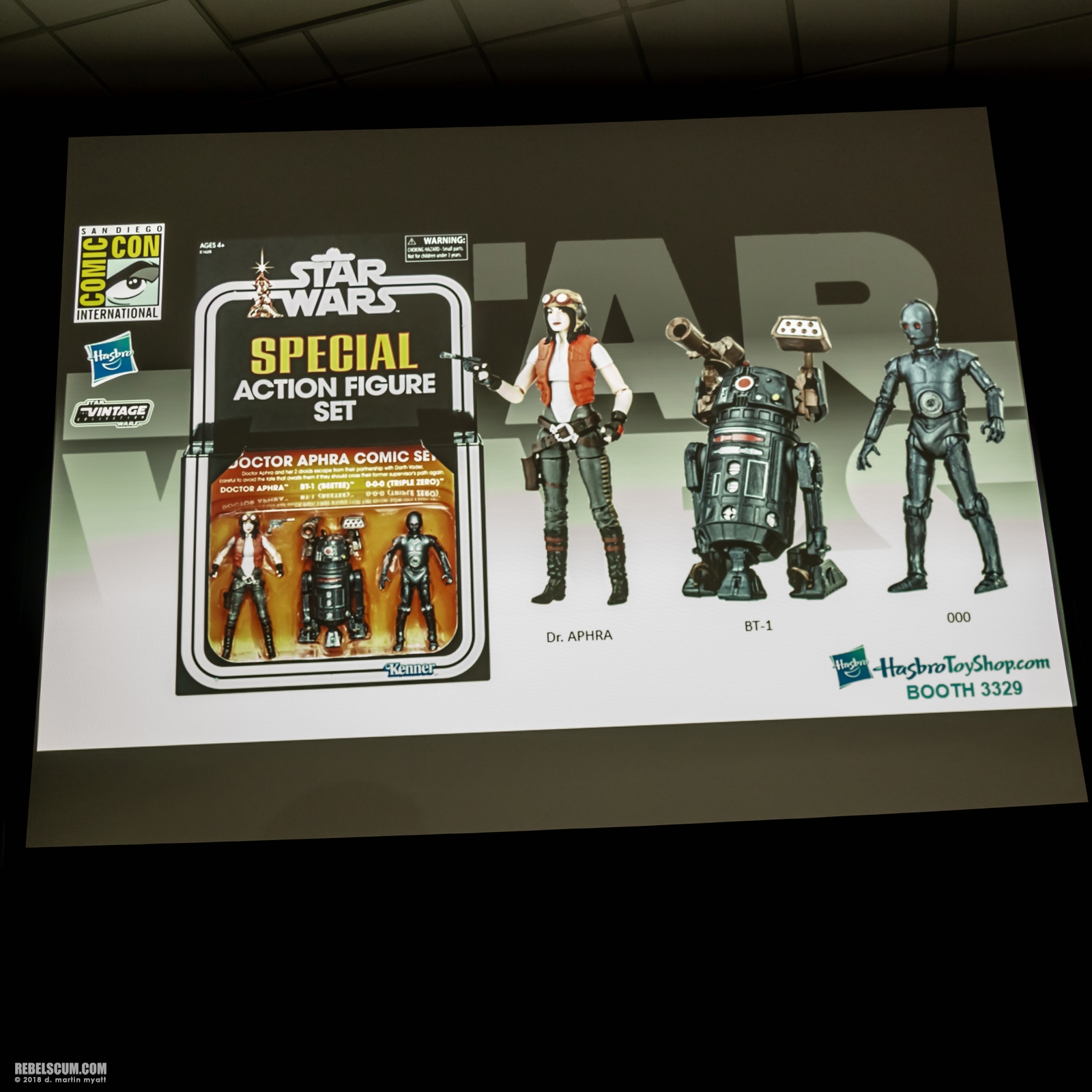 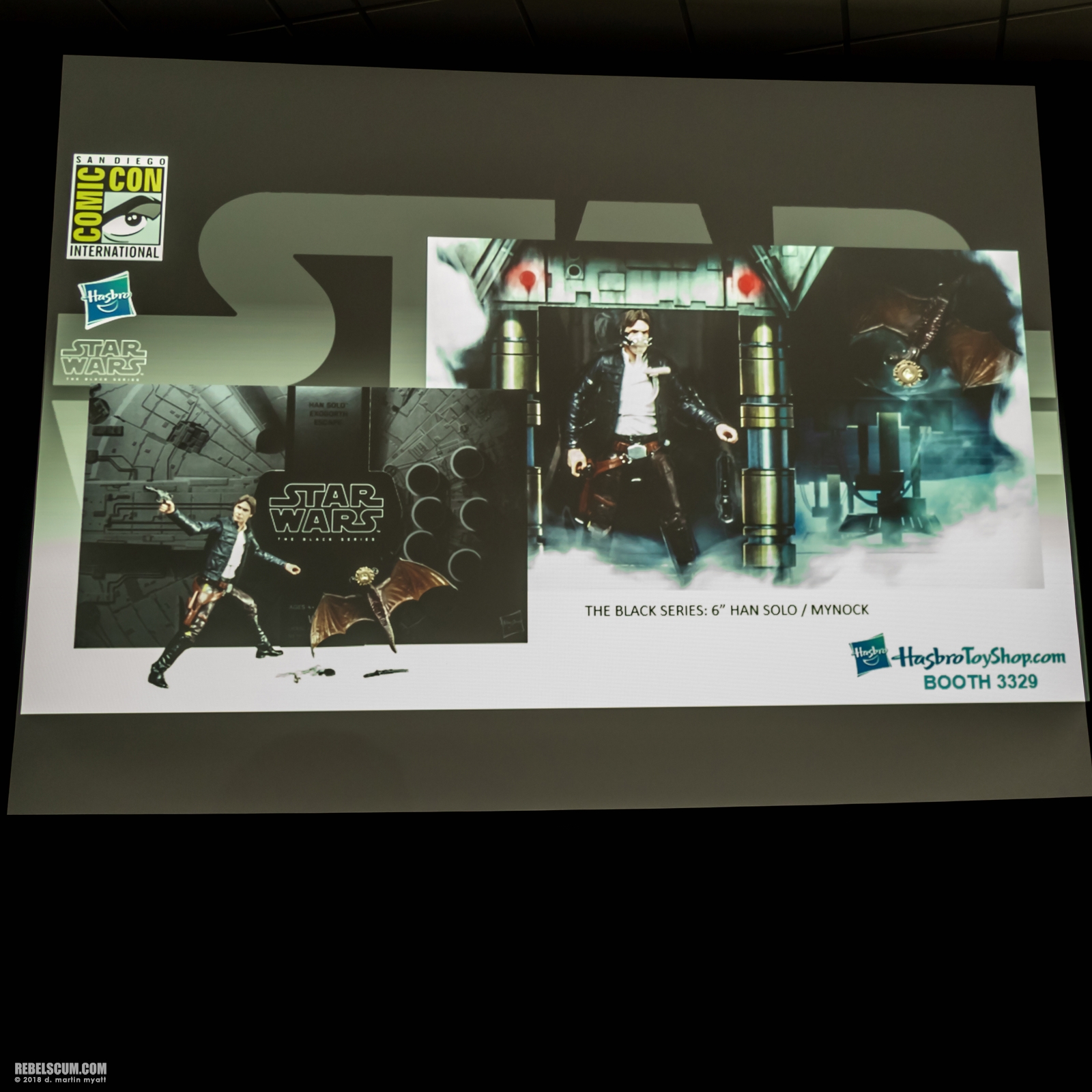 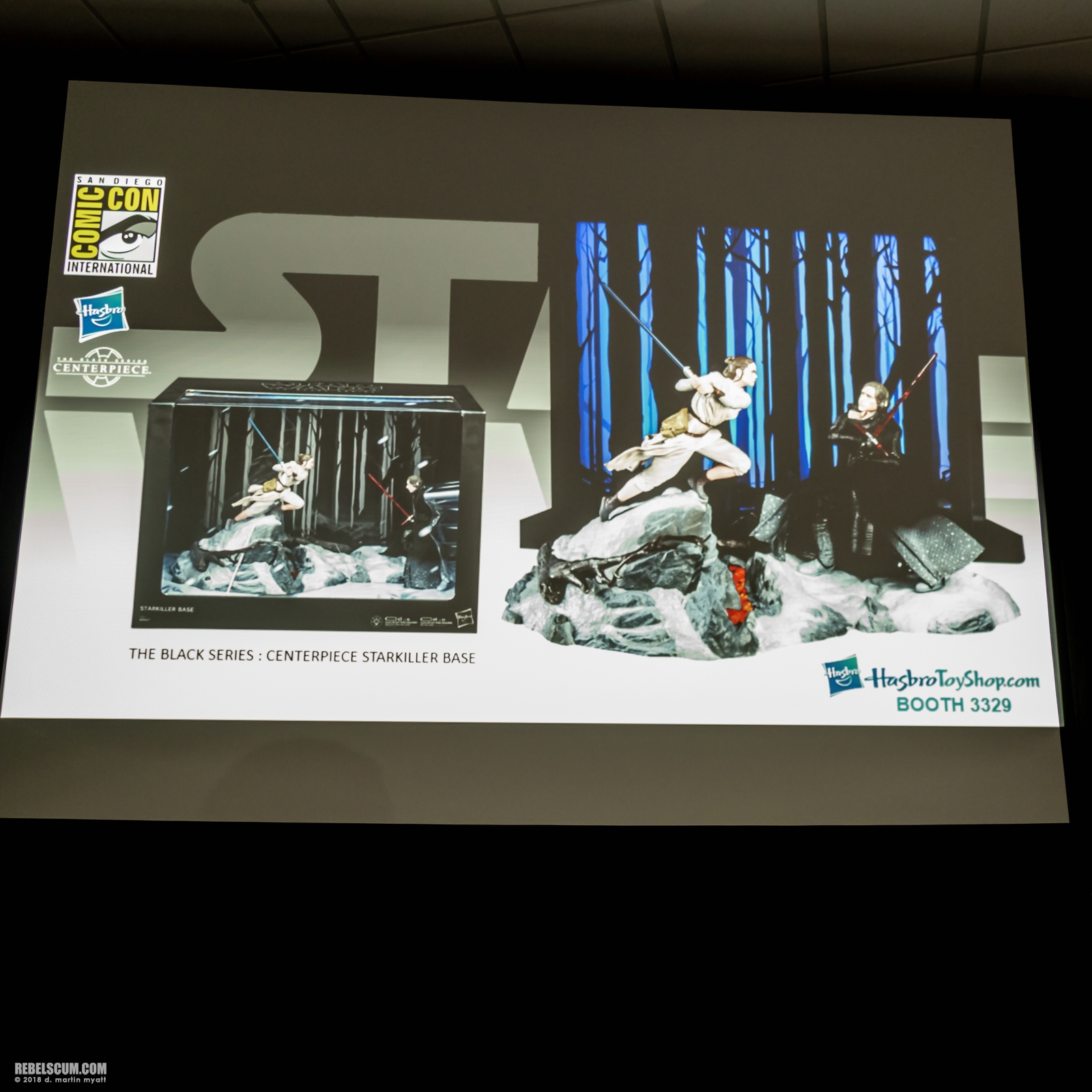 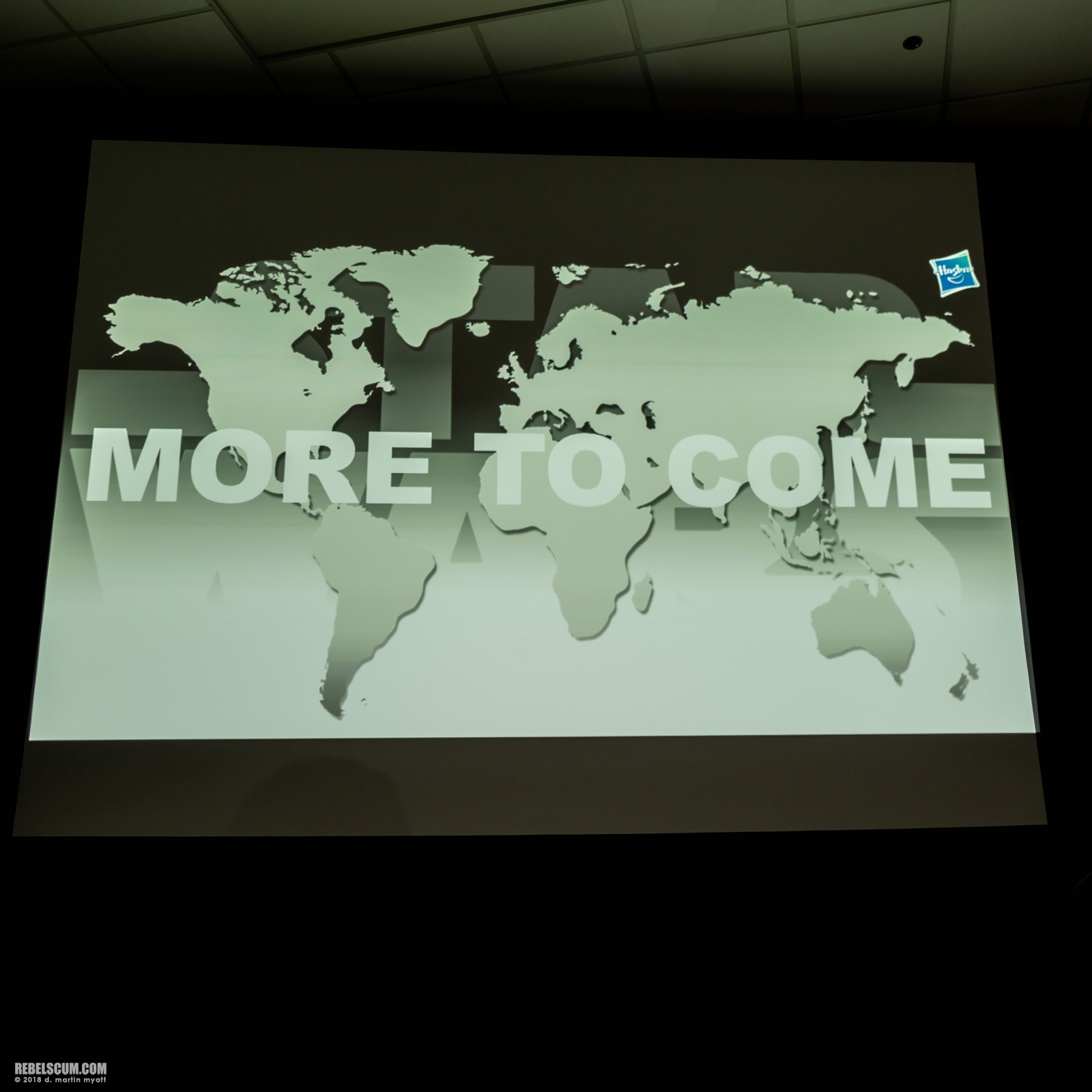 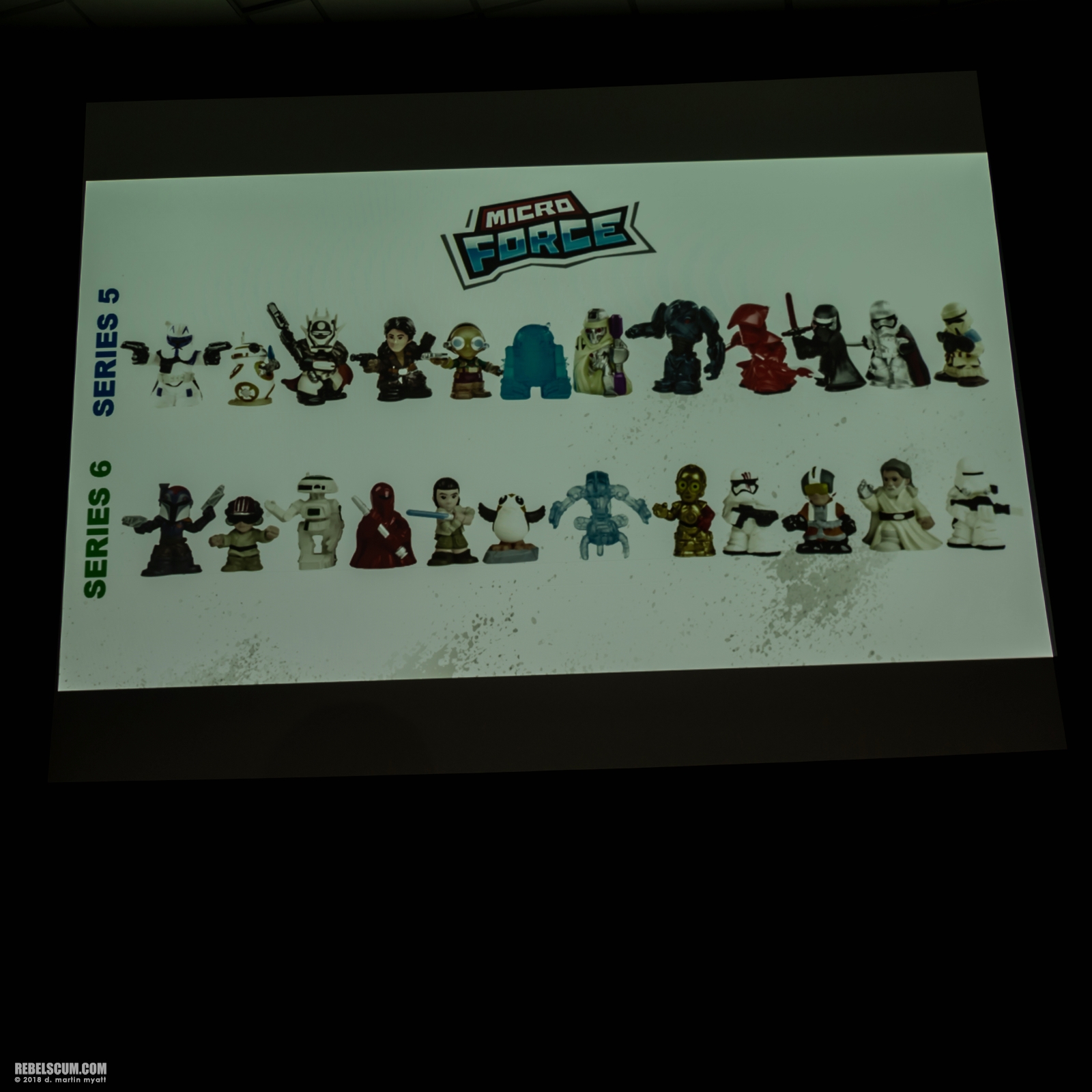 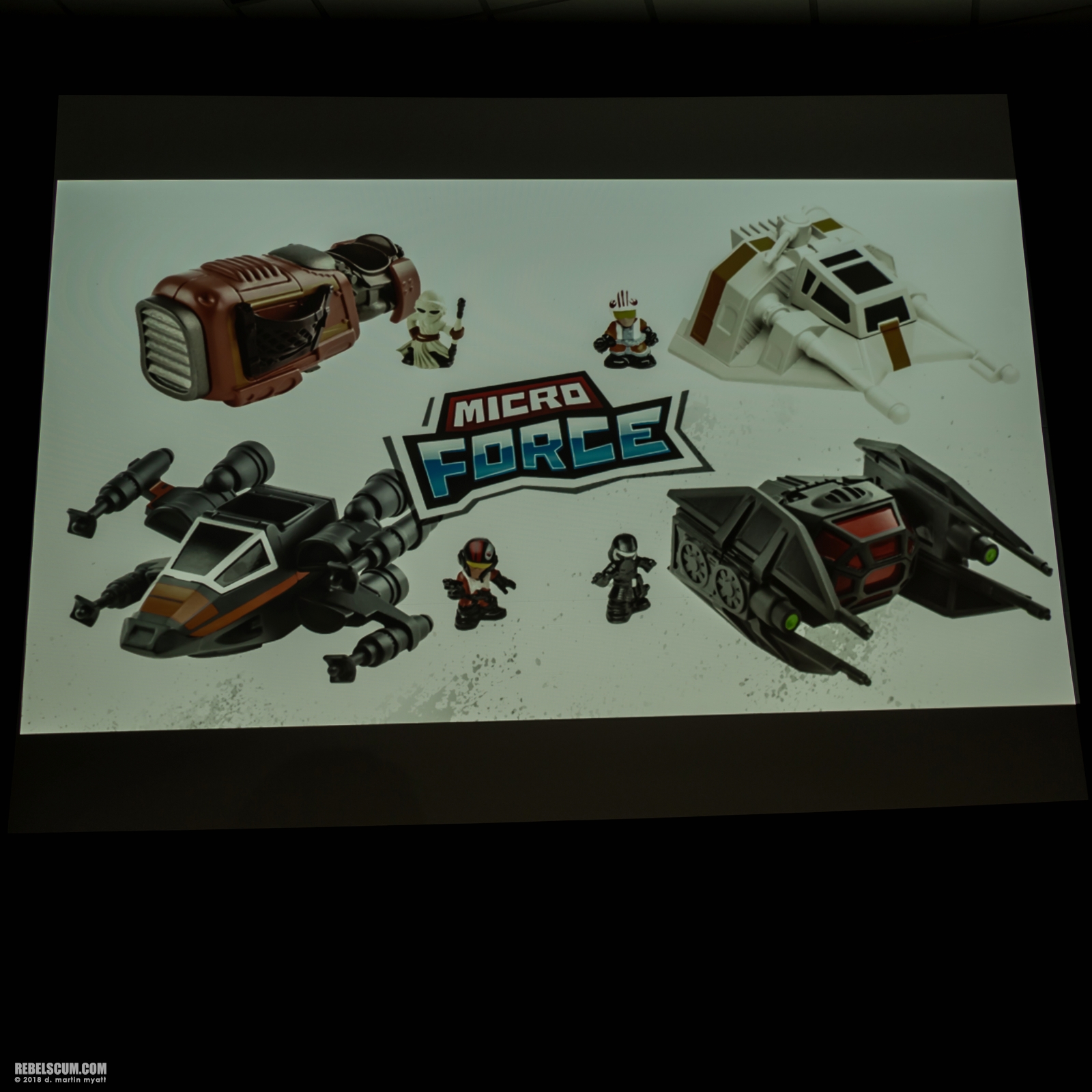 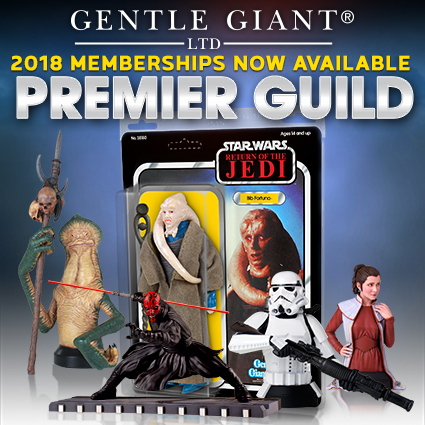 Our 2018 San Diego Comic-Con Coverage sponsored by our friends at Gentle Giant Ltd. Click the image above! 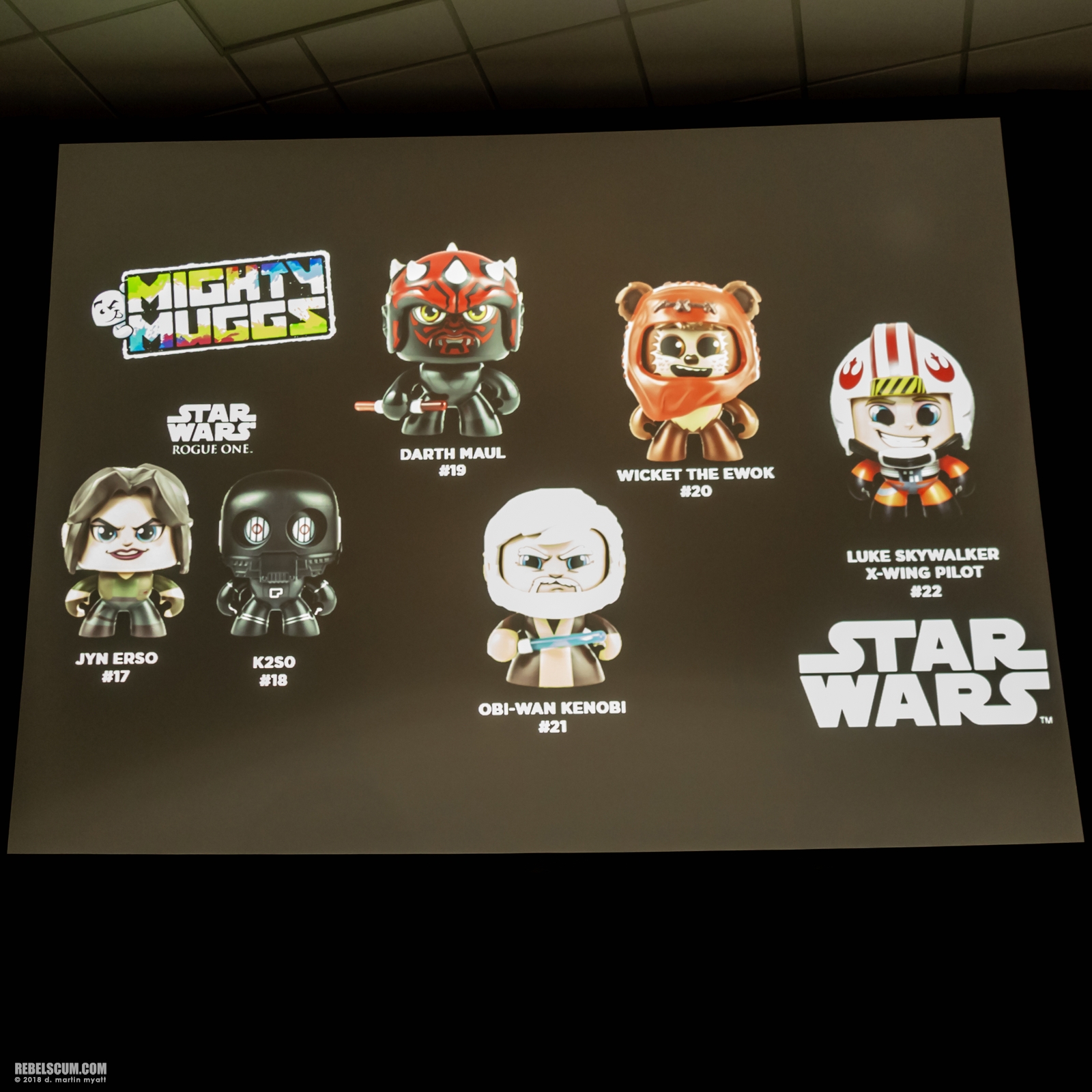 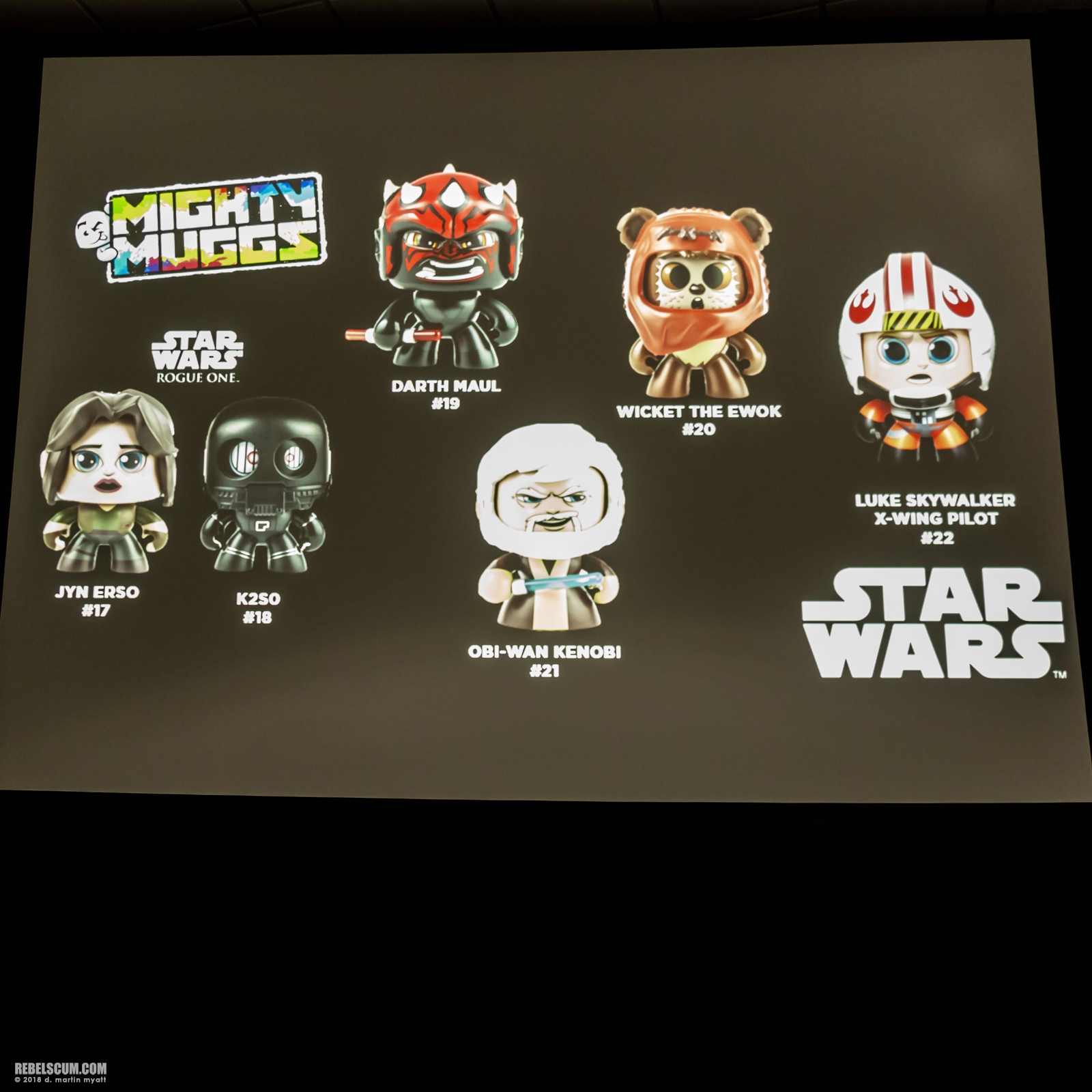 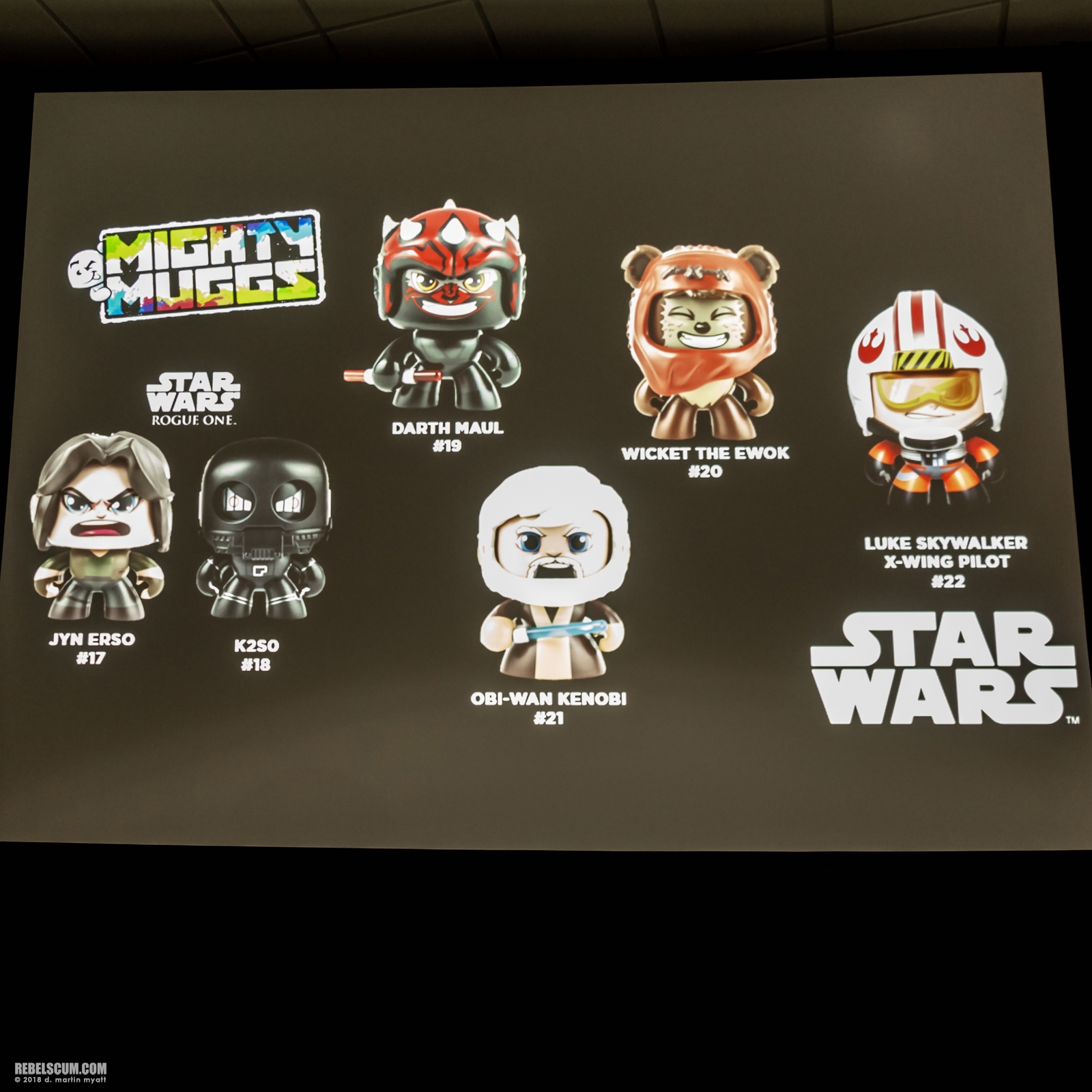 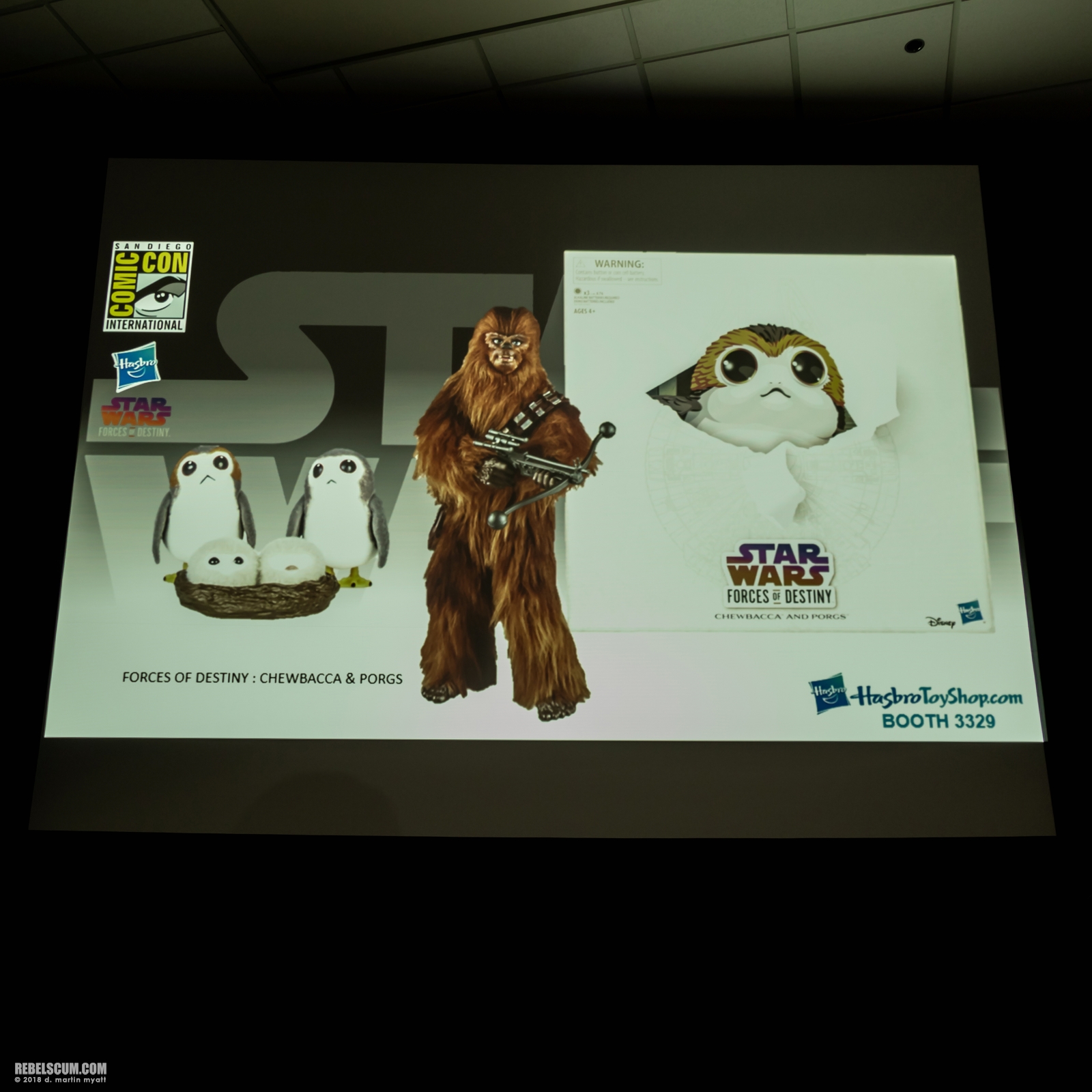 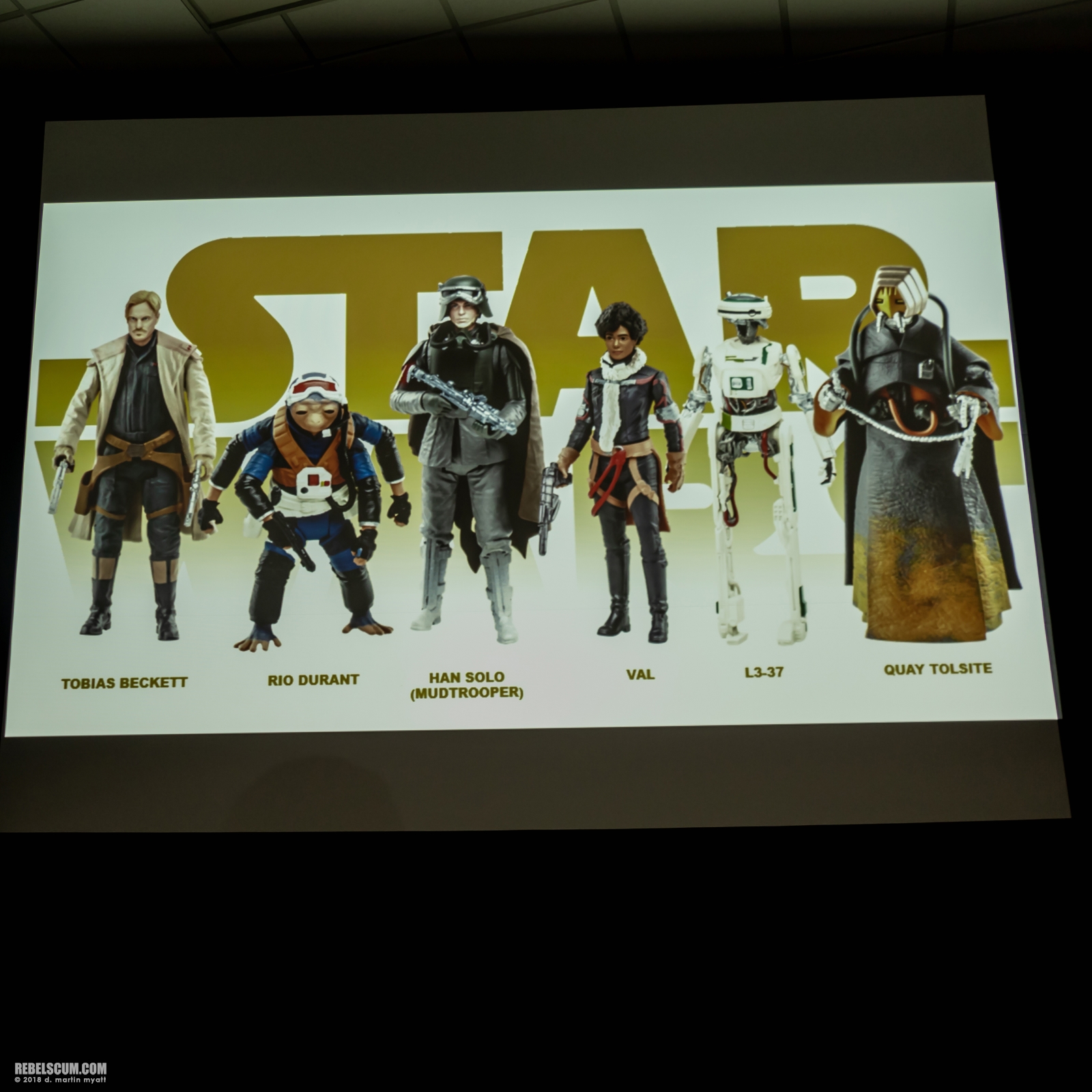