LEGO 18+ Collection Grows
Posted by Jeremy on March 12, 2020 at 09:08 PM CST
It's only been a couple of days since we learned that the LEGO Star Wars theme will see a series of helmet-inspired displayable sets, and now comes the surprise revelation - care of Promobricks.de - that there is a third helmet. 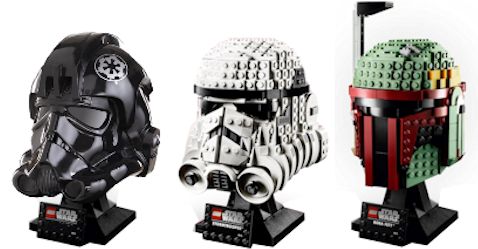 When we first posted our speculation report on what sets LEGO would display at New York Toy Fair 2020 we noted that one of the expected April sets was still a mystery.

"Additionally a fourth set is being linked to LEGO set inventory number 75274, and is expected to retail at $70. At this point, this is the full spectrum of speculation on this suspected addition to the LEGO Star Wars theme."

Now we know that the phantom set is in fact a 724-piece TIE Fighter Helmet, has an RRP of US$69.99 and is a retailer exclusive.

The story's original source suggests that it will be released as a direct-to-consumer product through LEGO.com and their branded stores on April 19th. Other sources have added that it - at least in the USA - could also be made available through Target on May 4th.

Of course, none of this is accurate or official until LEGO provides information on the product - you can expect to find out a lot more about these helmets in about a week's time. Until then you can discuss them in the Buildable Model Helmet thread in our LEGO forum.
SEND