LEGO: 20th Anniversary Edition Sets
Posted by Jeremy on May 13, 2019 at 12:57 AM CST
With twenty years of LEGO Star Wars under its belt, LEGO has raised their lightsabres to salute the fans who've been in it since day one, which has been declared as the 1st of April, because on the same date in 2019 LEGO released a series of five retrospective sets that represent the Prequel, Original, Clone Wars and Expanded Universe eras.

While these anniversary sets might recall the start of the LEGO Star Wars license, the eye-catching packaging design harkens back to the earliest days of the Star Wars merchandising timeline - the parallel silver lines that first appeared on Star Wars packaging in the late 1970s.

"Perhaps the most evocative design element on any Star Wars packaging is the silver racetrack. It instantly transports fans of a certain age back to their childhood." says Star Wars Collector's Archive editor and collector of over 40 years, Duncan Jenkins.

It is worth noting that these anniversary sets sport the same racing stripes that the Original Trilogy Collection sets did, inspired by the Hasbro action figure line of the same name, in 2005.

As well as their look, the boxes themselves have a different feel, with a texture that will appeal to the tactile nature of most LEGO fans. Broken into two distinct zones, there is a slight grain to the background graphics - almost like the stars are raised - while the images of the set, logo and graphics are smooth and silky.

This sets progenitor was one of two that LEGO had been given full approval to create from scratch, without any direct source material from Star Wars or Lucasfilm. Why LEGO took this route when there was still so much canon material left has been lost to time, but we got the first of what would become the battle packs. 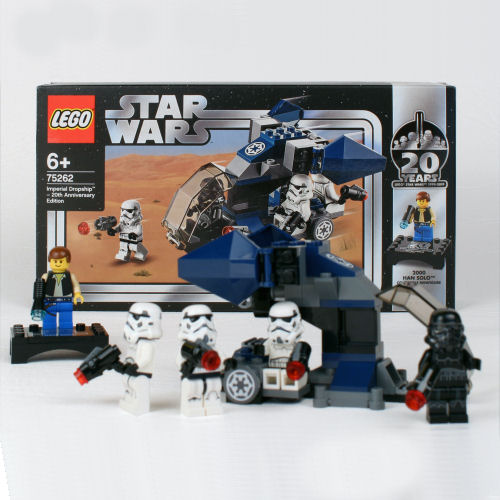 This reconstituted addition is the youngest of all the 20th Anniversary Edition sets, and was - we are informed - selected for inclusion because it marked the start of what was to become known as the LEGO Star Wars Originals until they were accepted into the broader Expanded Universe (and later Legends).

The newest design of this flying troop transporter - which can be easily imagined as rapidly dispersing Imperial stormtroopers in crowd control situations - is very similar to the original, and by clever selection of more modern elements, it manages to look even more "in-universe" than 7667 Imperial Dropship did when it came out in 2007. 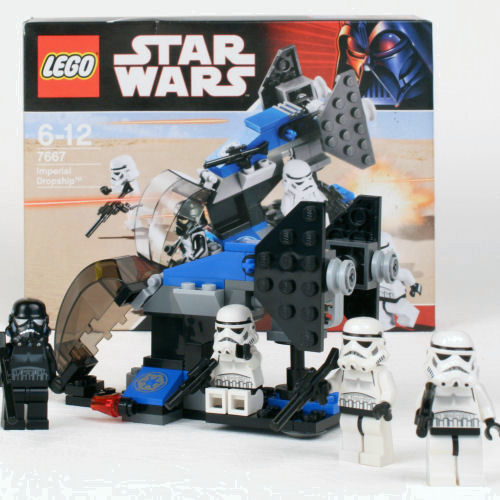 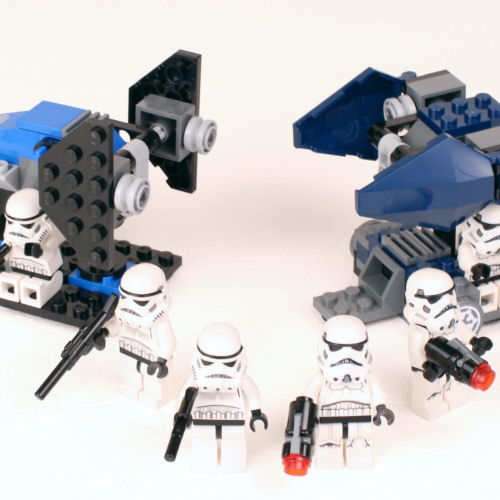 The three stormtrooper minifigures feature a brand new helmet mould, using two different pieces black and white of plastic dual-moulded to form a single helmet element that gives increased depth and detail. This new design was notably used in the recent successful bid to get the record for the Guinness World Record's title for the largest display of LEGO Star Wars minifigures, held at Star Wars Celebration 2019 Chicago in April. 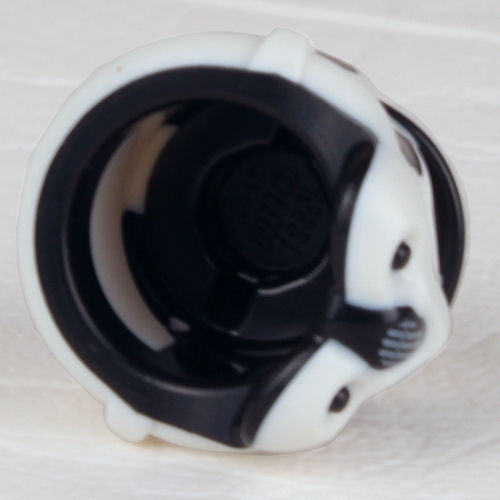 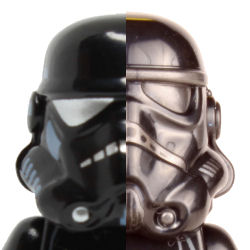 The fourth minifigure is a Shadow Trooper, which was originally released in 2007 with 7664 TIE Crawler and then again in 7667 Imperial Dropship in 2008.

Playing a big part in the Clone Wars, the Republic's scout walker, fans first saw this in the background during the Battle of Kashyyyk - right before the command to execute Order 66 was sent out. And of all the 20th Anniversary Edition sets, this one contains the most improvements and additions to the basic - almost pocket-money set - that LEGO released 14 years ago. 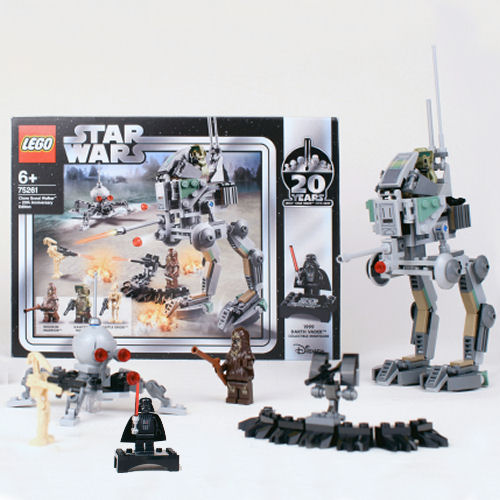 The original 7250 Clone Walker was clunky, lacked the detail that LEGO designers are now able to include in the builds and didn'thave particularly smooth articulation. Unlike the new version it only came with the walker and a single minifig. 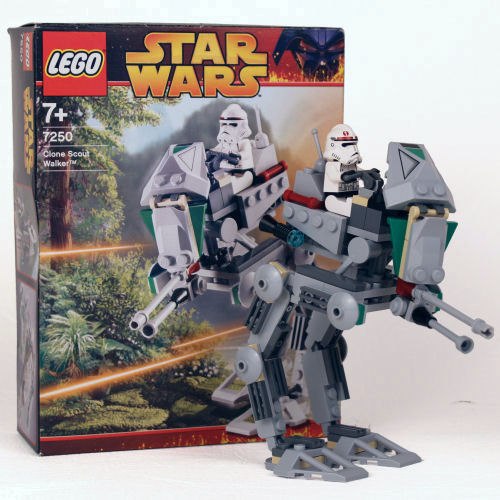 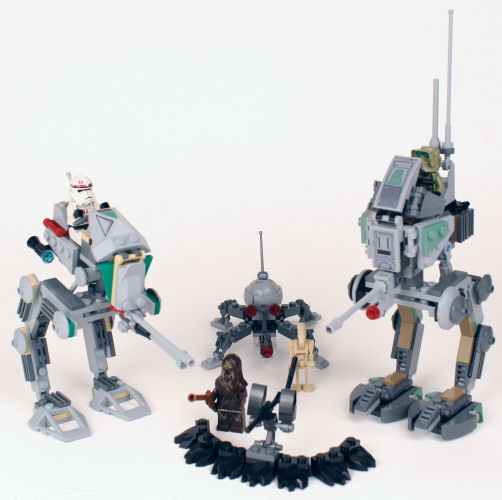 This updated set is a big step up from 7250 Clone Walker that came out in 2005 as part of the Revenge of the Sith line-up, with two additional minifigures (not including the Darth Vader collectible minifigure), a gun emplacement and Dwarf Spider Droid plus extra detailing and articulation of the set's main feature - the All Terrain Recon Transport (AT-RT).

The walker itself is an improvement with a far more robust build. The claim made by LEGO that this new design is more screen-accurate is evident during the build, and anyone recalling the 7250 Clone Walker will recognise the improvements that LEGO has made to the design. In particular the panelling to the cabin (though the Kashyyyk Clone Trooper minifigure does have an obsured view) and the bipedal legs, which account for the bulk of the additional piece count. 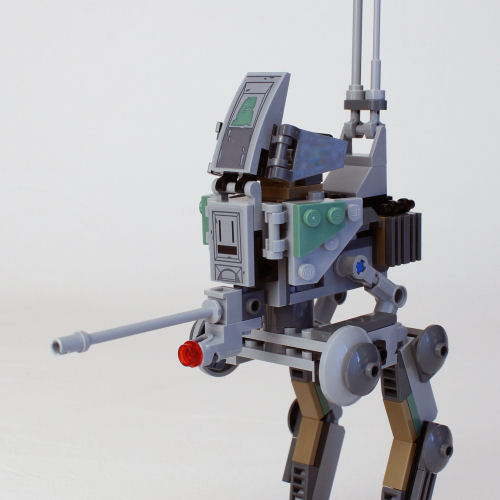 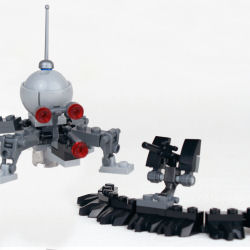 The trench and gun emplacement look more like something from a modern battlefield on Earth than you'd expect to see on Kashyyyk, but it still works - if for no better reason to relieve the Wookiee Warrior minifigure of the less-than-modern musket. The inclusion of the Dwarf Spider Droid, which is the fourth variant of this scuttle-bot, is the first of its kind with a stud blaster and is joined by a lone Battle Droid armed with a blaster.

One of original sets from The Phantom Menace release wave in 1999, this was one fo the designs that had a much younger Jens Kronvold Frederiksen pulling his hair out. Early sit downs with Lucasfilm's art department, led by Doug Chiang, created a stir amongst the LEGO designers that had been flown out to Skywalker Ranch in 1998. Their chief concern was how to create the effect that the racer's cockpit was being towed through the air by the two powerful pod engines. They overcame this in a rather clumsy manner by using tan blocks and plates. 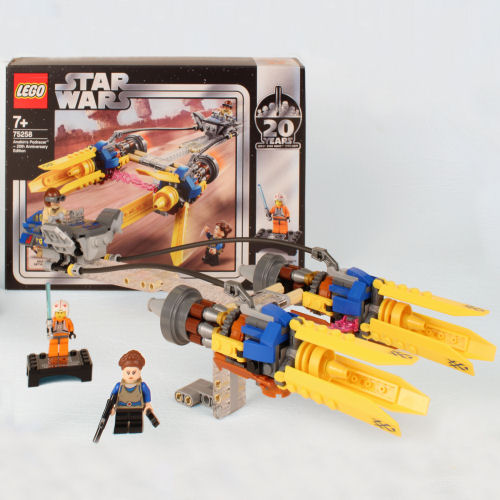 The set captured the imagination of kids and collectors alike and proved so popular that when LEGO realised their first MINI sets, 4485 Sebulba's Podracer & Anakin's Podracer was included in the launch wave in 2003. The problem of binding the engines and the cockpit together was overcome with a transparent element, and this approach was used when the two Boonta Eve foes were packaged together in 7962 Anakin's & Sebulba's Podracers in 2011, and it is Anakin's podracer in this set that the 20th Anniversary Edition really encapsulates. 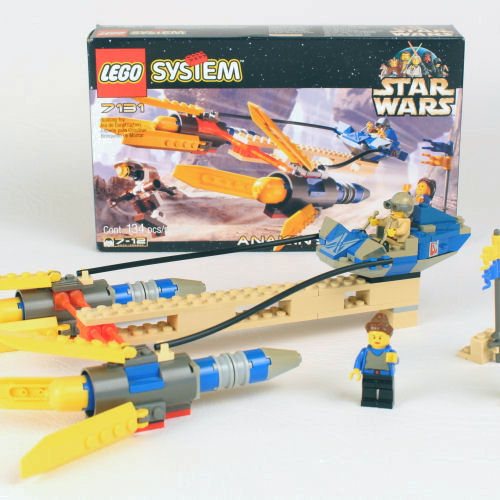 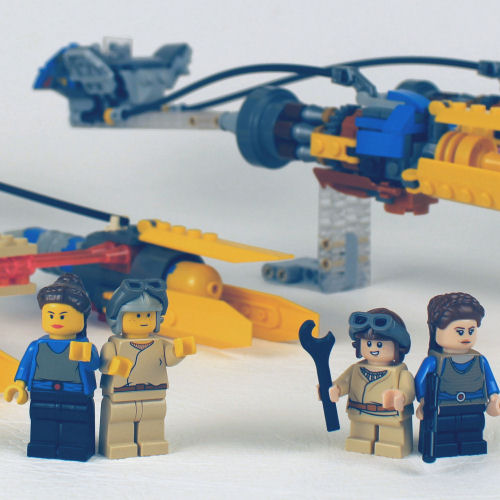 The set is a neat one, and getting to use primary colours in LEGO Star Wars sets is as refreshing as it is rare. Utilising the stand, which Anakin's podracer balances on quite elegantly, as a grip for small hands is a stroke of genious because said hands know how to bring a podracer across the finishing line in first place.

That said, the primary reason that LEGO rolls out when it redesigns a set is improvement and this set isn't so much an improvement but a facsimile. Still, it's great that after nearly a decade this hot rod, lifted from George Lucas's early years, is available again. If anyone at LEGO is looking for ways to improve this design then consider transparent Technic pins. Throwing in a few pit droids wouldn't be a bad thing either!

This special re-design is the first true 20th anniversary set, having been part of the wave of Original Trilogy releases that came out as 7130 Snowspeeder at the very start of the license in 1999. 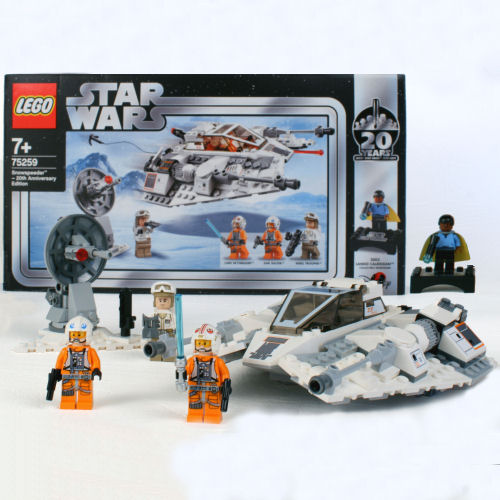 The build starts with the latest interpretation of the 1.4 FD P-Tower, known to vintage Kenner collectors as the Radar Laser Cannon, and it's a sterling upgrade to the original design. Comparing it to screencaps from The Empire Strikes Back it's easy to see that LEGO has come as close to nailing it as they ever have. 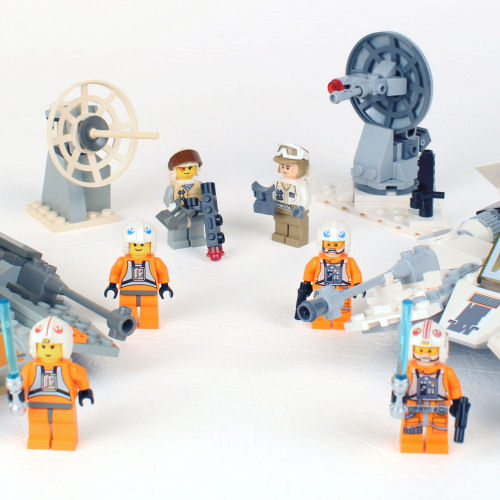 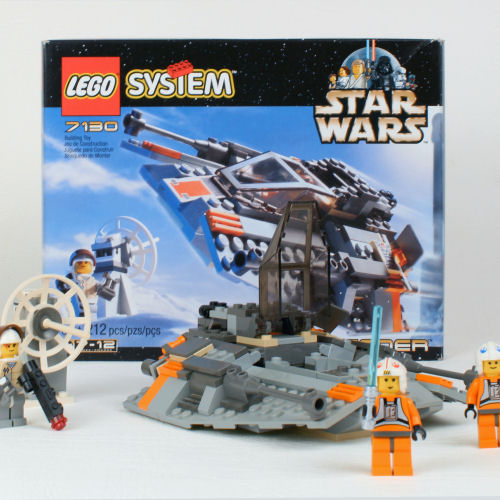 Compared to the original 7130 Snowspeeder, which was a solid grey with the occasional splashof orange, this new one is far more movie accurate and lacks the flattened leading edge and is is a nice combination of bricks and plates in white, greys and the occasional feature orange that combine in a sleeker, more detailed reinterpretation of the original. That the movie version is a greyer shade of pale than the palette used by LEGO matters not because the assemblage works. A brilliant touch is the underslung spring-loaded missile shooters which line up with the top-mounted laser canons, creating the effect that the transparent red "laser bolts" are coming from the canons is barely coincidental.

The set is packed with the second most minifigures of the 20th Anniversary Edition line - Rebel Trooper with a heavy blaster, plus Luke Skywalker (with pistol and lightsabre) and gunner Dak Ralter (with pistol) in their orange flight suits.

The old school heavy blaster (the camera with side gun element that has been in 11 other Star Wars sets, including all the System-scale Rebel Snowspeeder sets) is a nice touch, but it remains the one weapon that a right-handed soldier can't use the site on. It's time that the Rebel Alliance either recruited more lefties or designed a heavy weapon that has the scope on the correct side of the barrel.

Perhaps the most disappointing model of that first generation of sets was the one everyone had such high expectation of - 7144 Slave I - and after nearly 20 years LEGO have made it all better again. 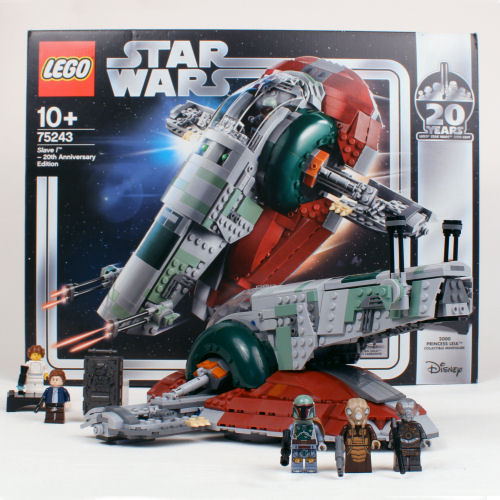 It's fair to say that the sets of the first couple of years were rudimentary compared to the designs of today, and the patient zero of this 20th Anniversary Edition version stood out for the wrong reasons. To declare it was underwhelming is an understatment. It's size and detailing weren't selling points, and there were very few play features included with it. 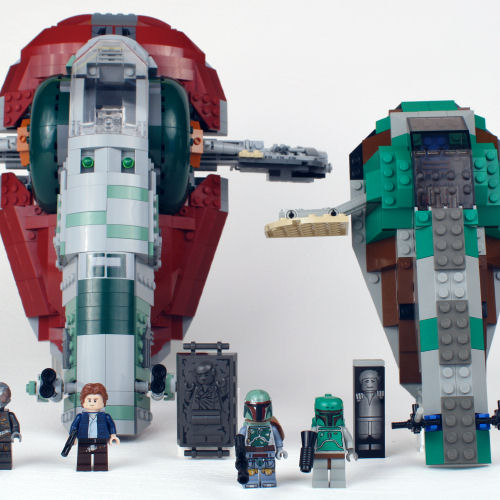 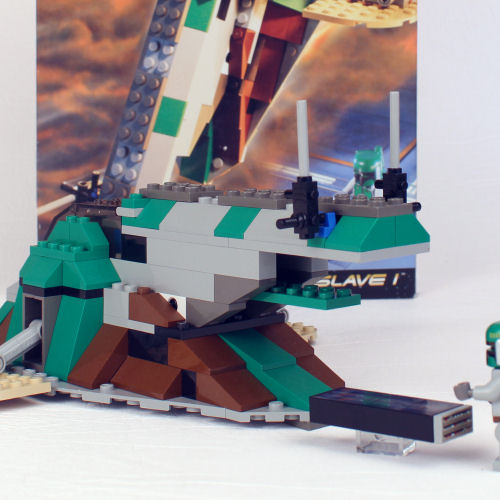 Despite the popularity of Boba Fett's pursuit ship the number of sets that LEGO has produced over 20 years is surprisingly low. And while a handful of Slave Is, in both original Jango livery or dirtied-up Boba decor, have hit shelves there has (until now) only really been one stand-out version - UCS 75060 Slave I. For a number of years it was considered the pinnacle Slave I set, but the title is likely to get passed on to the 20th Anniversary Edition version.

Stunning beyond belief is the only way to describe this Slave I. The solid infrastructure means that the model benefits from a swooshing handle, inspired by the 1981 Slave I toy from Kenner, that folds out from the back, and robust wing arches mean that the failure of 7153 Jango Fett's Slave I won't be repeated

Though they'll never come out and openly admit it, the whole reason LEGO went to all the trouble to re-imagine the four previous sets is so that they had a reason to come up with a new Slave I design that comes so close to trumping the Ultimate Collectors Series version it's unbelievable. Add that LEGO finally completed the bounty hunter line-up is the icecream on the cake. 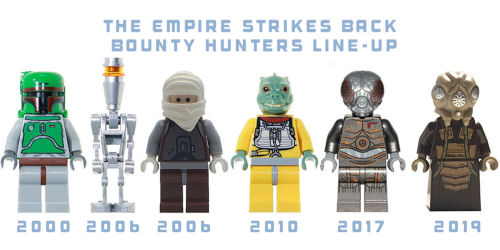 The 20th Anniversary Edition subtheme is set to grow throughout the year and Rebelscum will be continually updating this collection, so don't forget to check back.