Spend time in Tatooine's most dangerous bar, Mos Eisley Cantina. Park the Ubrikkian 9000 pod outside! Help Han Solo knock Greedo from his chair without getting the Sandtrooper's attention. Keep up with Wuher while serves the drinks! It's just an average day at Mos Eisley Cantina!

A rough outline of the set has been provided to us, and it seems to closely match the one from 2003. 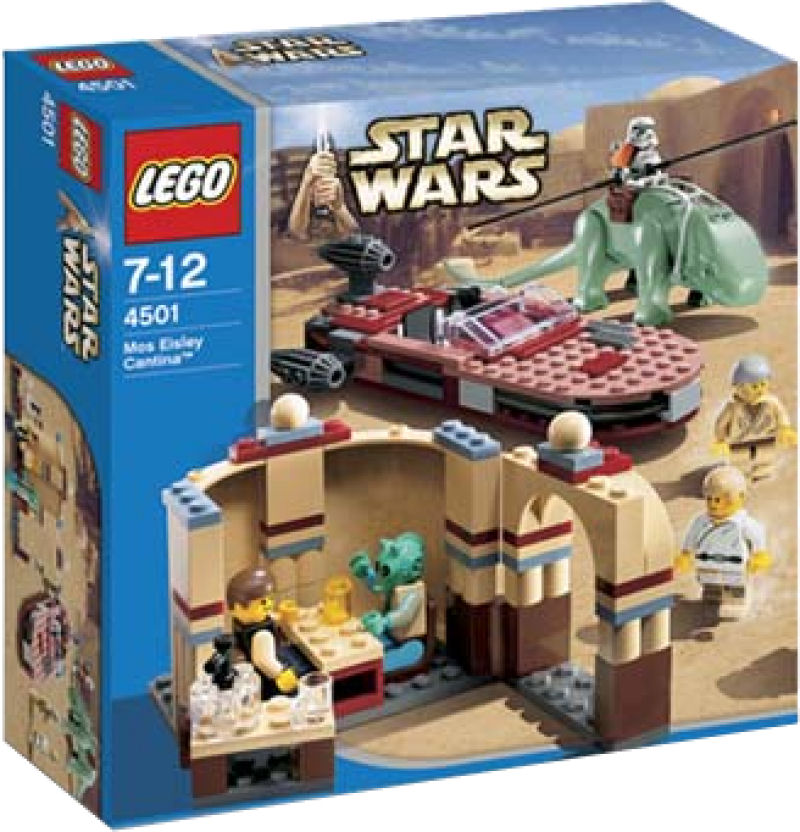 Our source bids you to look at the boxed shot of 4501 Mos Eisley Cantina and imagine:

"Picture the box from the first Mos Eisley cantina set and you're on the right track. Except this new set is flipped around, so the entry way in 4501 is the booth that Han Solo and Greedo are in. And instead of it being 4 studs deep like the old one, the new one is six deep, and the chairs are brick built instead of a single piece. Not sure how this works as an action feature like the text describes.

The other section, which is the Han/Greedo stand-off booth in the first one, is now an entry way. A stormtrooper with a white shoulder pauldron nd a blaster is in it, and there is a sliding door.

On the far left where the swing table in in the original set, is a section of the bar. It's made up of three curved pieces so you get half of the u-shaped section. The top is a couple of grey plates and behind the bar is a dispenser made of pearl gold bricks. The new Wuher minifig stands behind the bar.

It's hard to tell but it looks like the alcove might be hinged so that is closes up against the entry section, and this sits against the bar.

And where the dewback and landspeeder are on the old box is a white bulbous speeder that looks like a mushroom. I'd say that the speeder is made of lots of separate plates. And there might be a vaporator with the set - or it might just be a photo for decoration."

The piece count for the original Mos Eisley Cantina (4501) is 160 parts, and this one is 376 bricks. So based on the description our source provided it would seem that the difference in pieces is mostly made up by the Ubrikkian 9000 (is there a more apt name for a LEGO made landspeeder?), and then with the new bar.

A third source has provided photos of the minifigs that are included with the set. Note that the stormtrooper is missing its pauldron.

As with everything in this report the expected release date (late Q1 2018) and price point (approximately $25) are also subjective to official statements.
SEND