LEGO: 75238 Action Battle Endor Assault Review
Posted by Jeremy on June 26, 2019 at 10:25 PM CST
Curious - and a touch jealous if I'm honest - about all the fun that Oscar and George had when they play tested the two Action Battle sets for Hoth, I recruited Son of LEGOscum to once again step forth to do battle. 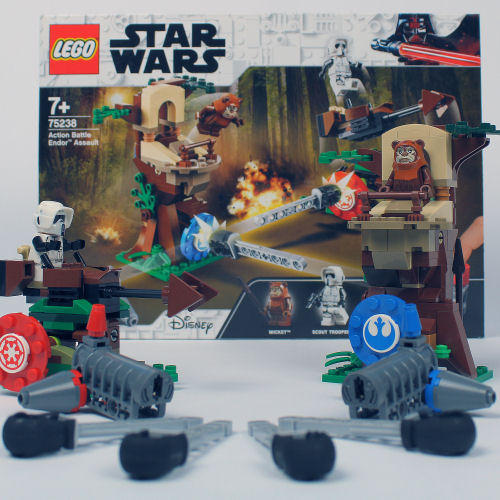 Keen to show his building skills off, Oscar got stuck in and provided a running commentary as he first assembled the Imperial portion of the set - a Speeder Bike with a Scout Trooper minifigure - and then the indigenous Ewok treehouse with Wicket minifigure.

Its worth noting that the Scout Trooper is all new for April, and has a unique dual moulded helmet and brand new torso and leg prints. Its unusual that LEGO would go to such effort for a relatively inconsequential set, so the expectation is that this new minifigure will be utilised elsewhere in the near future. 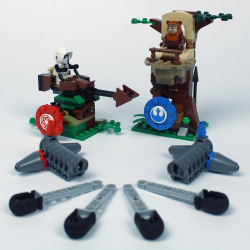 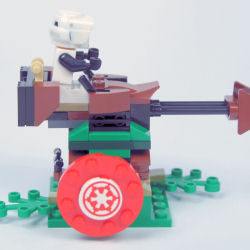 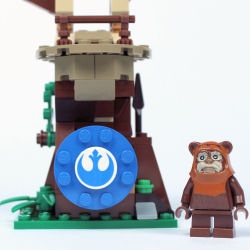 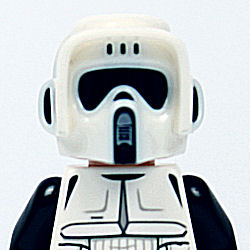 The set is billed as one that kids, along with friends and family, can enjoy for hours so Oscar and I put claim to the test. Adapting the rules from the previous day's Battles of Hoth, we developed World Association Calvin Ball to include barrage attacks, deciding that each side would get 15 seconds to get off as many shots as possible.

This rapid-fire style of gameplay was both exciting and amusing and the hair trigger of the spring-loaded launchers caused much mirth. And while the joy of seeing the speeder bike being thrown off its base was not matched by the collapse of the treehouse - as a direct hit to the target at the base of the tree merely pitches Wicket from his perch - it was strangely satisfying to see the tiny bear face plant into the table cloth.

As simple as the battle game is it still gave the both of us a very special experience that lasted - on and off - for a couple of hours. 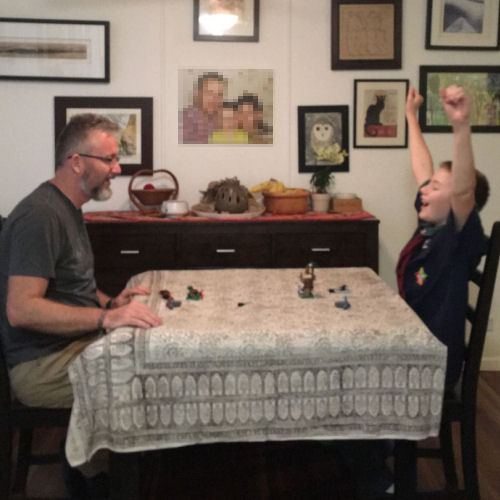 If you are looking to expand your Endor diorama then you might as well skip this set, but if a fun game that, packed into a small case, that would make an ideal travel partner is what you're looking for then grab this before its too late.

The only detractor from Endor Assault (75238) is that it is the outlier of the three Action Battle games as it is a standalone set.

Lacking a larger, counterpart set to add some meat to the battle, Oscar put his head muscle to work and thinks that the next Action Battle set should be called Action Battle Bunker Attack" and come with an Ewok catapult and a fallen log/heavy cannon emplacement for the Rebels, while the Empire has a Scout Walker to defend the bunker door. Oscar's selection of minifigures would be an Ewok warrior, a Rebel Commando, Princess Leia (Endor Outfit), a Scout Trooper, an AT-ST Driver and an Imperial Trooper. This sounds remarkably like 8038 The Battle of Endor, a set that came out in 2009 and hasnt been repeated since.

Do you have any thoughts on this set, or would like to share your ideas on what the fourth Action Battle set should consist of? Head to our specially for(u)mulated thread in our discussion boards.
SEND