LEGO: Building Tatooine By The Numbers
Posted by Jeremy on December 20, 2019 at 07:41 AM CST
Since the beginning, The LEGO Group's foundation of "play well" has meant that they have developed their products with imagination and creativity in mind. Some sets - like the programmable 75253 Droid Commander set from the Boost robotics theme - use science, innovation and technology to inspire development and learning in kids, while other tap into a more basic drivers, such as building and roleplay, to engage young minds and help children express themselves.

It's not often that such a triptych presents itself, and it's unheard of in the pantheon of LEGO Star Wars to have the combined release of three dovetailed sets that aren't linked to a current Star Wars movie release. Yet in this Winter wave of LEGO Star Wars sets that is exactly what we have, in the form of the previously announced 72570 Obi-Wan's Hut and Luke's Landspeeder , plus the freshly revealed 75265 T-16 Skyhopper vs Bantha Microfighters (all due out on January 1st, 2010). 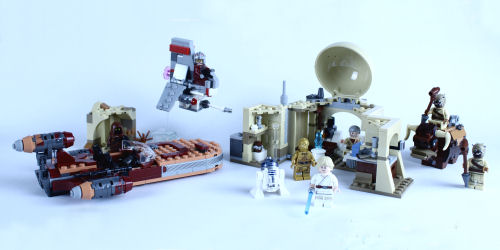 While this triple set of Tatooine builds does include a couple of rehashes, the inclusion of two icons of the Star Wars galaxy is exciting.

First and foremost is 72570 Obi-Wan's Hut, the first - and last - of the Jedi hermitages. There was a period of my life when I could watch the Original Trilogy and call out "I've visited X" or "I've been to Y" and "When I went to Z..." but my roadtrip of nostaglia always hits a speed bump whenever I watch the Special Edition version of A New Hope.

With the new Obi-Wan's Hut set LEGO have made a course correction with their mash-up of the original 1977 version and the digital exterior from the 1996 director's cut, with a little sprinkle of their own characteristic innovation - and the end result proves that they did their research. 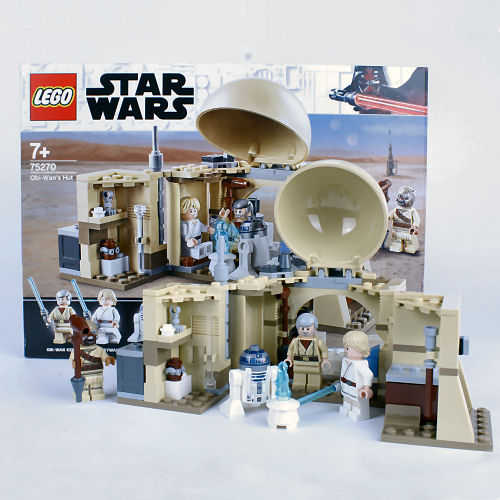 The set's configuration does a great job of combining features the various floorplans that have been put forward over the forty plus years since we first saw Luke Skywalker receive his father's legacy, and includes some neat little additions to bring this reclusive Jedi Master's domicile to life.

The details of Obi-Wan's existance are brought to life, with LEGO revealing that his compact kitchen is equipped with a small solid fuel (presumably bantha or dewback dung) stove on which he cooks his favourite dish - green soup. This look through culinary keyholeis completed with a review of Ben's table setting - acarton of blue milk and a big mug to enjoy it in. With his broad smile, one has to wonder if Ben has taken up homebrewing fermented bantha milk to help fill his days. 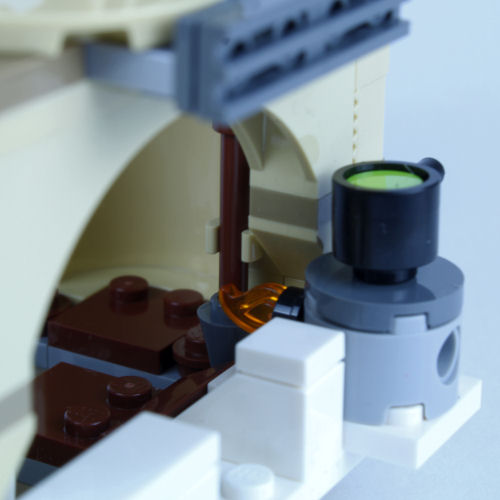 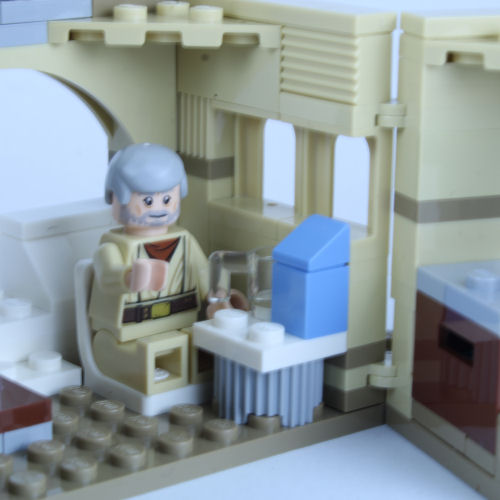 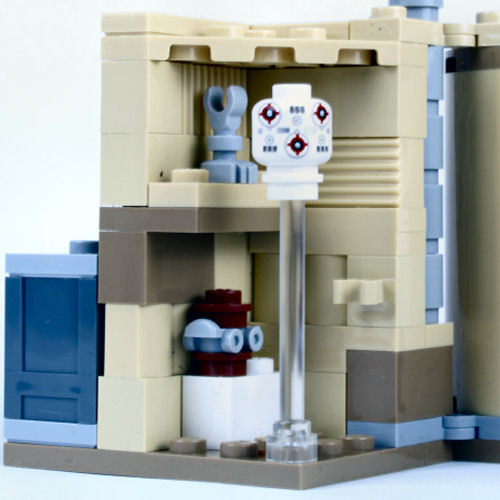 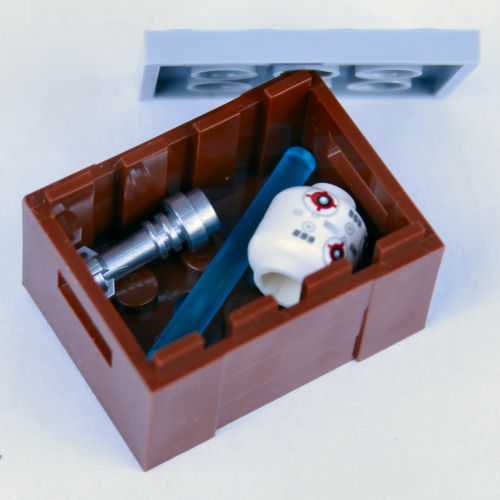 Further minutae of Ben's remote lifestyle includes a gaffi stick (presumably an alternative home security option to keep his Jedi heritage under wraps), a trophy nook, a composting bin for his table scraps and a secret Jedi stash box where he can safely hide a Jedi training remote, and a pair of laserswords.

Don't think for a second that LEGO have spent the budget on the interior, because the external details haven't been neglected. On top of the aforementioned eco-friendly gargage bin Obi-Wan's Hut sports a flip-top dome, a stovepipe and an airvent. 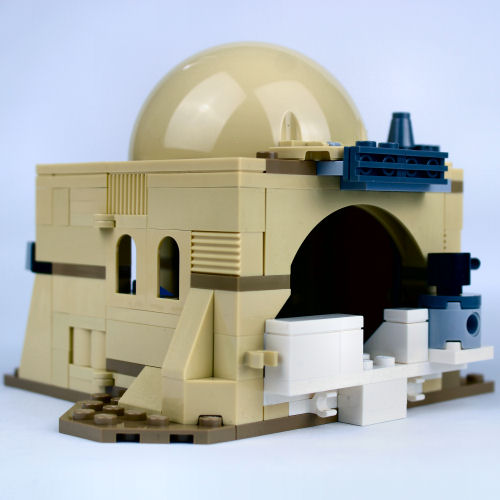 Could this set be improved? Sure. At this point does it need to be? No, and there's no doubt that in years to come we will see step changes as LEGO issues new versions of Ben's hermitage. In the meantime there's interest among fans for some LEGO Star Wars ancilliary sets - including vaporators, eopies, assorted droids and the like - to compliment and expand play environments, just as LEGO does with their xtra theme for the City line. Builders can turn to LEGO Star Wars Ideas Book, from DK, for inspiration while they wait.

Also in the Winter wave assortment of Tatooine treats is the "new" Luke's Landspeeder, a vehicle that is believed to be so frequently repeated in the LEGO Star Wars theme that the standing joke is this set is a right of passage for new designers on the LEGO Star Wars team. A modicum of research shows that LEGO have only produced six Landspeeders appropriately scaled for minfigs - a number that is probably lower than most LEGO Star Wars fans realise.

Even if you think that this is another case of LEGO re-inventing the repulsorlift, it's worth recognising that this is an incremental improvement over prior iterations. On first impression Star Wars fans will notice that its dimensions are the closest LEGO has come to matching the original landspeeder prop from A New Hope amd the metallic bumper stickers gives it a retro look that draws from the vintage Kenner line. That this is the first time LEGO have shifted the landspeeder's palette away from the tans and reddish-browns to the more pastel end of the colour chart should make LEGO fans sit up and take note. 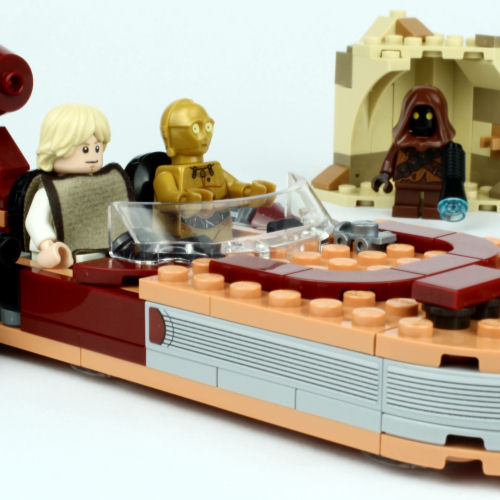 I can't say with certainty that I've assembled every landspeeder set that LEGO has produced over the years, but I'm fairly certain that this is the nicest one I'veput together. The cockpit's detailing - especially the inclusion of the padded seats - is a delight, as is the extra level of complexity and detailing on the engine pods. The rising support for the middle engine is a bit incongruous with the otherwise sleek nature of the design, but it provides a hinge so that the storage compartment can be accessed. 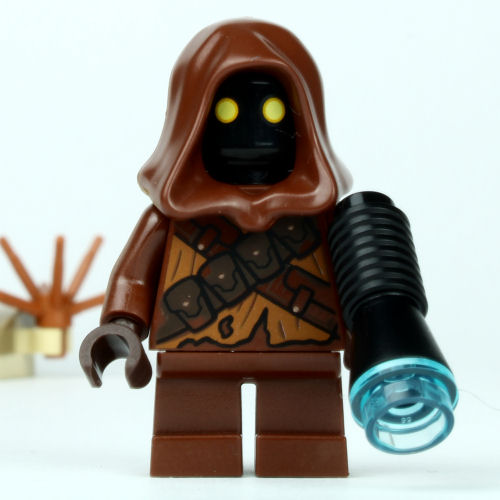 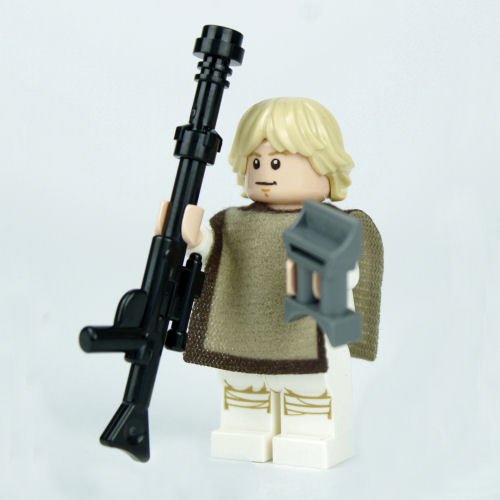 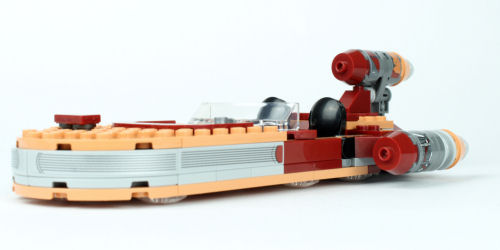 The vehicle is augmented with a small cave that gives the included Jawa minifigure cover to ambush Luke and C-3PO during their search for the errant R2-D2, who has a special message to deliver and is making its way through the Jundland Wastes to Obi-Wan's Hut. The inclusion of Luke's hunting rifle, which can be correctly mounted on the landspeeder's faring, is a nice touch, but the real master stroke is the all-new poncho that keeps sand out of Luke's raiments. We all know how much Skywalkers hate sand.

That sets are revisited - to take advantage of new elements, colours and building techniques and to allow new collectors a chance to have by-gone sets at regular prices- every so often means that eventually LEGO will deliver us a landspeeer that can accomodate the two droids behind the seats, as they were when Luke and Ben arrived in Mos Eisley.

This trilogy of sets from the twin sunned planet is 75265 T-16 Skyhopper vs Bantha Microfighters, a set that comes so close to hitting the mark it's going to ignite many a fans' feelings on why LEGO hasn't delivered us a bantha yet.

This duelling Microfighter set obviously comes with a T-16 Skyhopper and Bantha - it's in the set's name after all - that allows for roleplaying battles. But what isn't immediately obvious is that the two builds come with individual instruction booklets and the pieces are bagged up seperately, meaning that the duel can start as soon as the box is opened. 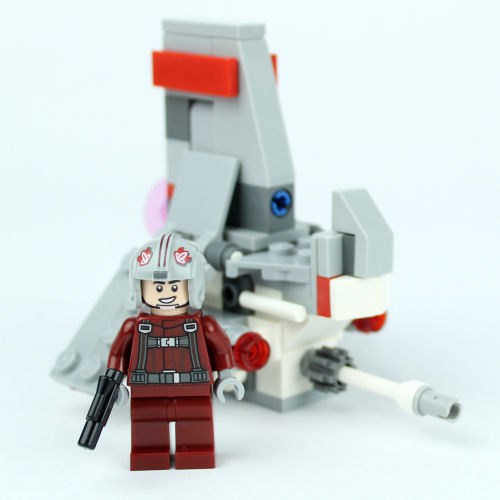 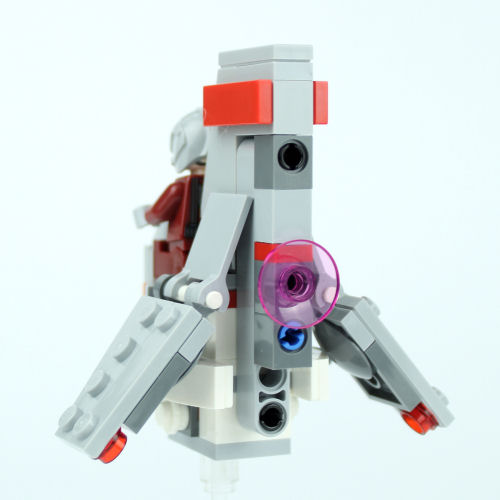 New to Microfighter scale, but not new to the LEGO Star Wars theme, is the T-16 Skyhopper which has previously only appeared in sets 4477 (2003) and 75081 (2015). The chibi dimensions of this new T-16 does make for a very cute version, and the stud shooters add a little play value but let's be honest, you're buying this for the bantha. 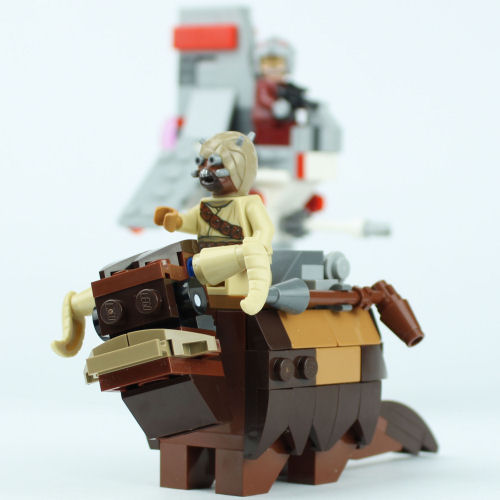 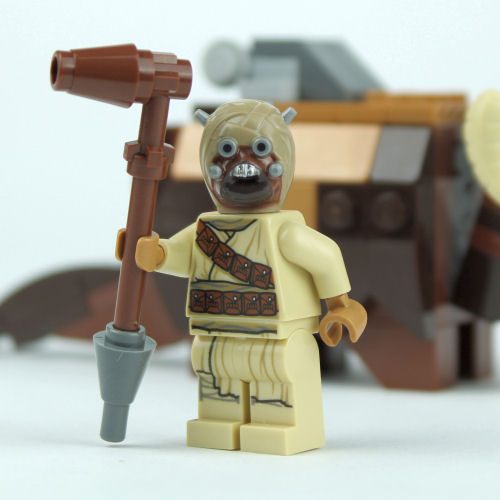 From the inside to out, the bantha is a neat build. Its internal structure relies heavily on the BrickHeadz skeleton and this makes for a very solid body, and the clever placement of curved tiles and wedges creates a shaggy effect that does well to mimic the banthas we have seen in the Star Wars movies and fifth episode of the live action The Mandalorian series. Like the Skyhopper, the scale of the bantha compared to the minifigure creates a deformed, out-of-persepctive affect which makes it easy to see the bantha as a calf of its species.

This model has been a long time coming, and as satisfying as this brick-built, micro-bantha is, fans will still be asking for a moulded version like the tauntan or dewback. Perhaps one day LEGO will be able to fulfill fan desires with a larger version. Until this happens there's always the option of making your own, just like Eric "BaronSat" Druon has done. 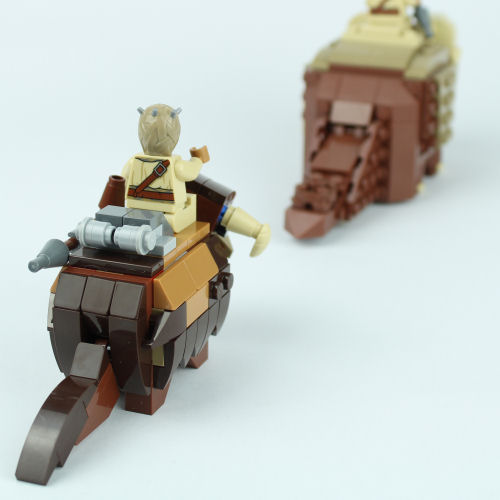