LEGO: Q1H2 2017 Set Details Posted
Posted by Jeremy on April 22, 2017 at 12:49 AM CST
Official photographs and set descriptions of the next wave of LEGO Star Wars sets - due out at the start of June - have surfaced. The full details for the next sets are: 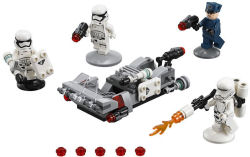 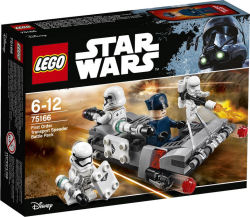 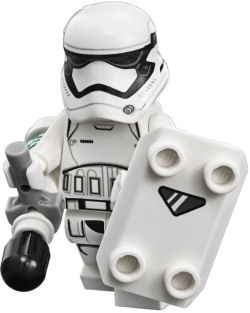 Support the Imperial troops with the First Order Transport Speeder Battle Pack. Send enemy forces running for cover with the stud shooters and detach the shields and batons to arm the Stormtroopers. Then fire up the Flametroopers flamethrower and march into battle!

Send in reinforcements with the First Order Transport Speeder!

Join the battle with the First Order Transport Speeder, with space for 2 minifigures, stud shooters, and detachable stud blasters, shields and batons, plus 4 minifigures. 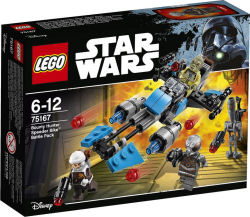 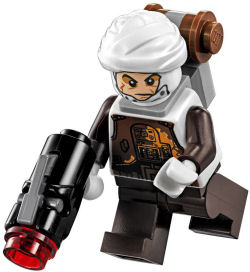 Help Dengar, Bossk, IG-88 and 4-LOM track down their bounty with the fast speeder bike. Zoom over planet surfaces and fire the stud shooters to blast through any obstacle. These bounty hunters are on the hunt!

Get Dengar, Bossk, IG-88 and 4-LOM on the move with their own custom Bounty Hunter Speeder Bike. With striking blue elements, 2 stud shooters and space on the back for a backpack, this speeder bike battle pack will send your LEGO Star Wars adventures into overdrive! 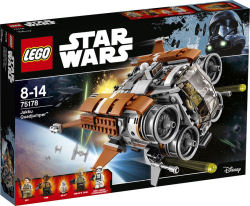 Help Rey, Finn and BB-8 escape from Jakku before theyre caught by the First Order Stormtrooper and Unkars Thug! Can they make it to the Quadjumper in time and make a quick escape, or will you hit the button on top to send the engines flying just like in the Star Wars: The Force Awakens movie! That's for you to decide

Escape Jakku in the powerful Quadjumper! 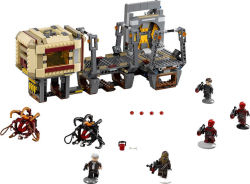 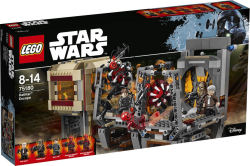 Help Han and Chewbacca outwit Bala-Tik and his Guavian Security Soldiers aboard their freighter. Lower the blast door to trap them, hide under the floor for safety and then pull the fuse to release the deadly Rathtars! When youre done, rearrange the freighter sections and plan your escape all over again!

Escape from Bala-Tik and the dreaded Rathtars!

Escape the jaws of the Rathtars with this modular freighter interior with lowering blast door, trapdoor with crawlspace, Rathtar release function and 5 minifigures.

Recreate epic scenes from Star Wars: The Force Awakens, as Han Solo and Chewbacca try to escape the clutches of Bala-Tik and his Guavian Security Soldiers aboard their freighter. Featuring a modular design for easy reconfiguration, the freighter sections contain authentic details like a lowering blast door, trapdoor and crawlspace in which to hide. Pull the correct fuse to release the 2 buildable Rathtar figures with posable tentacles and teeth, then rearrange the sections and play out another Rathtar escape! This great set includes 5 minifigures. 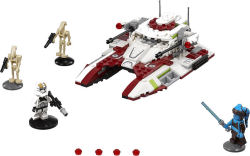 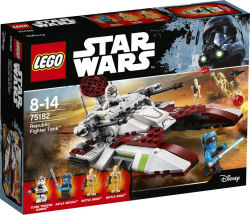 Hover into battle with Aayla Secura against the Battle Droids! Open the hatch, sit the gunner in the cockpit and take aim with the dual stud shooters. Access the ammo store at the back to rearm and send those droids flying!

Pack a punch with the Republic Fighter Tank! 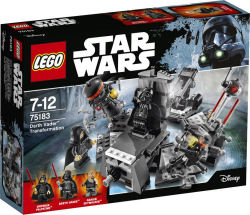 Rush to save Palpatines apprentice, Anakin, before its too late! Lower the table, twist the handle, push the helmet into place and raise the table again to reveal the evil Sith Lord, Darth Vader! Pretend to use his powers of the Force to send the medical droid and pillar flying. With Lord Vader, the Empire is complete!

Bring Darth Vader to life at the medical bay!

Recreate Anakins transformation into evil Darth Vader with this LEGO brick recreation of the medical bay scene from Star Wars: Revenge of the Sith. This detailed set features a table with space for Anakin that lowers and flips to reveal Vader, Emperor Palpatine's greatest creation. You can also slide his iconic helmet into position and, like he did in the movie, pretend to use the power of the Force to send the buildable droid and Lightsaber rack flying! This multi-function set includes 3 minifigures and 2 buildable medical droid figures. 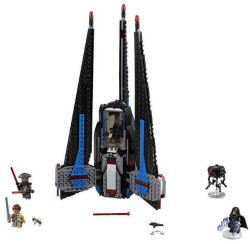 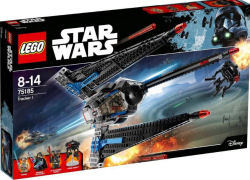 Travel the galaxy in Tracker I as the M-OC Hunter Droid goes in search of the Freemakers. Grab weapons from the store, load the shooters, climb the access ladder into the cockpit and launch into space. Can Rowan avoid detection from the probe droid, or will he be locked in Tracker I's prison cell and delivered to evil Emperor Palpatine? Only you can decide

Search out the Freemakers with Tracker I!

Play out your own LEGO Star Wars: The Freemaker Adventures encounters with this impressive tri-wing Tracker I model, featuring spring-loaded shooters on each wing and side hatches that reveal a weapon store, access ladder and a prison cell with space for a minifigure. Open the 3 windows of the minifigure cockpit and attach the M-OC Hunter Droid using the special shoulder armor element, before swiveling it into position for flight mode. This great set includes 3 minifigures plus a buildable probe droid figure. 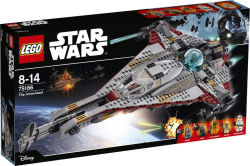 Go on deep-space missions with The Arrowhead! Lift off the canopy and jump Zander, Kordi, Quarrie and R0-GR into the cockpit. Check the power crystal with the service cart and then head for the stars! If you encounter an Imperial ship, fire the missiles or flip out the ram to send it spinning into space!

Go head to head with the Empire aboard The Arrowhead!

Act out perilous LEGO Star Wars: The Freemaker Adventures missions with The Arrowhead. This aggressive-looking starship features a lift-off cockpit canopy with space for 3 minifigures and R0-GR inside, a transparent opening dome revealing the ship's removable crystal power source element, 2 spring-loaded shooters and an impressive flip-out battering ram. There's also a service cart with tools and ammo as an extra play starter.

The Vintage Collection - General Toy Discussion Thread
Rancor - Haslab 2021
Anything New In Australia!!!
Some of my Super Mario Bros. customs
The Razor Crest
The Book of Boba Fett
Is this a legit orange hair farm boy luke?