LEGO Star Wars: A Video Gaming History
Posted by Jeremy on April 8, 2020 at 03:43 PM CST
So part of the pixellated landscape are the LEGO video games that it's hard to imagine a time when they weren't around - and it was Traveller's Tales first Star Wars title that made it all happen, and though they've held the limelight for the last 15 years, Traveller's Tales weren't the first to come up with the concept of merging the world of LEGO with animated sprites.

It was Mindscape who delivered the first true LEGO video game to the world - though technically the educational LEGO Fun to Build on the Sega Pico, a platform only released in Japan, was the first computerised title - with their LEGO Island action-adventure game.

Having only partly enjoyed the success of LEGO Island, LEGO decided it was going to publish its own games and founded a division to take care of this new field. And so LEGO Media was created in 1997 (and renamed LEGO Software in 2001, before becoming LEGO Interactive in 2002, before closing in 2004).

But it wasn't until 2005 that the scenery changed when LEGO Star Wars: The Video Game was released by Traveller's Tales. This ground-breaking game's story actually started two years earlier when LEGO Interactive began talking about producing a cross-over game from their Star Wars license.

As fate would have it LEGO decided that, in one of their trademark changes of heart, digital entertainment wasn't for them, shelved plans for LEGO Star Wars: The Video Game and closed their studio's doors. This gave Tom Stone and Jonathan Smith, ex-members of LEGO Interactive's senior management team who came up with the initial concept of marrying LEGO Star Wars to a children's video game, the opportunity to form Giant Interactive Entertainment in 2004 and re-start the game's development, which had stalled when LEGO pulled the plug. 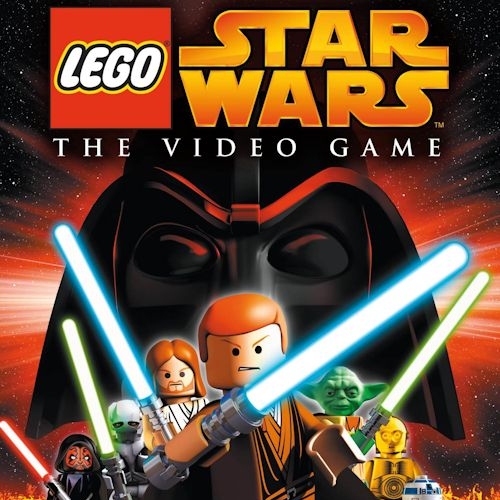 At this point, Giant approached Traveller's Tales, the small British video game developer who had been originally engaged by LEGO Interactive in 2003 to develop the first LEGO Star Wars computer title. Traveller's Tales had already demonstrated success in the late 1990s/early 2000s with a number of 3D titles developed in partnership with Disney and Sega and had shown an understanding of problem-solving games aimed at children.

With design and development handled at Giant Interactive Entertainment's offices just outside Slough in the south of England and programming and rendering at Traveller's Tales facility up north near Cheshire, the production of the game was an early first in that it used the internet as the main means of collaboration.

The communication and resource sharing didn't just flow north and south over the hills and down the valleys of the United Kingdom. Giant was also in close contact with LEGO in Denmark to the east and Lucasfilm in faraway California to the west - meaning the game was put together with three other companies based nine hours apart from each other.

Just before the game's release in April 2005, Rebelscum was given the opportunity to visit Giant's discrete offices set in the English countryside and experience LEGO Star Wars: The Video Game first hand, weeks before its release.

With the premiere of Star Wars: Revenge of the Sith still several months away, our initial exploration of the game was restricted to the spoiler-free levels in which The Phantom Menace and Attack of the Clones were played out in. Eventually, as trust was established, the new movie's levels were unlocked and the full extent of George Lucas's next chapter in the Star Wars saga was shared.

So new was the content the game promised that promoting the game's release began to take on some weird and wonderful approaches. When the game, distributed by Eidos Interactive, did come out at the end of March 2005 it was met by an audience that were stunned by both its ground-breaking gameplay and the fact it hit shelves seven and a quarter weeks before Revenge of the Sith, which at the time was heralded as the last ever Star Wars movie.

Little did we know that Lucasfilm and Giant/Traveller's Tales had other ideas, but before that could come to fruition Giant Interactive Entertainment and Traveller's Tales merged the week before their first game's release to create TT Games (who continue to hold the license to produce LEGO video games to this day).

Hidden in the game was a secret level that could only be accessed by those who completed the True Jedi challenge on each level. This hidden chapter allowed players to act out the boarding of the Tantive IV as Darth Vader. Ending with a "to be continued" message, it gave fans the hope of a sequel.

Over the coming months LEGO Star Wars: The Video Game quickly became a hit around the world as it was released on Windows PC, Nintendo Game Boy Advance/GameCube, Sony PlayStation 2, Microsoft Xbox and for the Macintosh, and went on to have gold, platinum and then "classic" edition re-releases through the next half a decade. 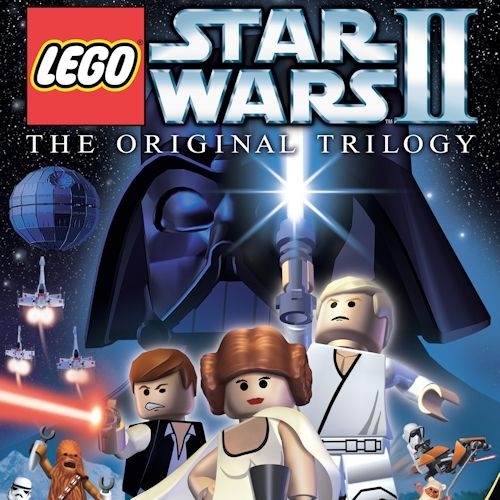 Having a hugely successful hit that was both critically and technically acclaimed meant that TT Games had their work cut out for them if they were going to release a sequel that would meet fans' expectation.

Officially revealed on February 10, 2006 at the International Toy Fair in New York, the game's existence had already leaked when the official Xbox Magazine, which had a double-page poster in their February 2006 issue, reached subscribers before the press announcement. When it came it was video game and entertainment website IGN who got the official scoop:

LucasArts has teamed up with Traveller's Tales and Giant (the game's original developer and producer) to create this year's sequel, LEGO Star Wars II: The Original Trilogy, due on PS2, Xbox, GameCube, GBA, PSP, PC and DS this fall. We spoke with David Perkinson, a fairly new hire at LucasArts, though not new to the industry, as he's worked on Gretzky NHL (PSP), Gretzky NHL '05 (PS2), and Gretzky NHL '06 (PSP and PS2). Perkinson explained how LucasArts plans to add new functionality, more Force powers, and a more robust custom character building feature. They're also aiming to tap into the original movie's best scenes and make it work on even more systems.

By the time the sequel was announced LEGO Star Wars: The Video Game had sold 3.3 million copies and the marketing and distribution budget for LEGO Star Wars II: The Original Trilogy was expanded.

With the return of LucasArts, the Lucasfilm division that had undergone creative and financial doldrums as LEGO Star Wars: The Video Game was being developed and had recently faced development, budgetary and staff cutbacks to make it more cost-effective and efficient, as the games publishing partner TT Games had more leverage in the video game market.

This could be seen in the implementation of a number of new game features that LEGO Star Wars II: The Original Trilogy required to improve upon the original.

Tackling the two main sticking points of LEGO Star Wars: The Video Game, chiefly the awkward and rigid third-person camera angle and the limitations of playing with non-Force user characters, TT Games developed a secondary control that allowed for limited POV pan and gave all non-droid characters the ability to solve puzzles by building with brick. To balance out gameplay where Force skills were still required, character abilities were expanded, creating situations where specific characters could use special abilities and weapons to complete tasks and overcome hurdles. Also added to combat was a dodge mode (meaning non-Jedi/Sith could defend themselves against laser bolts) and melee for close-quarter combat, and vehicle-only levels were included.

In keeping with the original game's humour, characters were given unique dodge and melee moves that were part of the lore of the Star Wars galaxy. Also included was the Character Customizer, an in-game mix-and-match tool that allowed players to select different heads, torsos and legs to create their own unique player avatars. 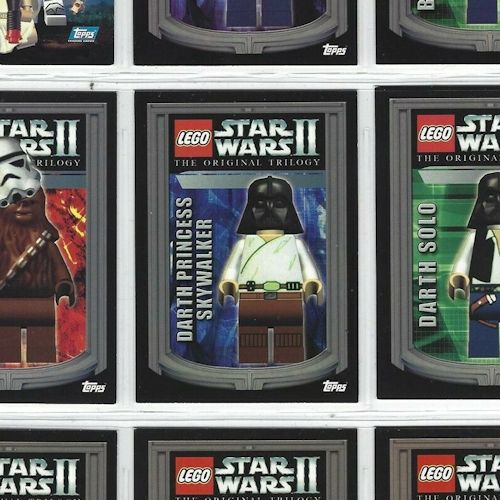 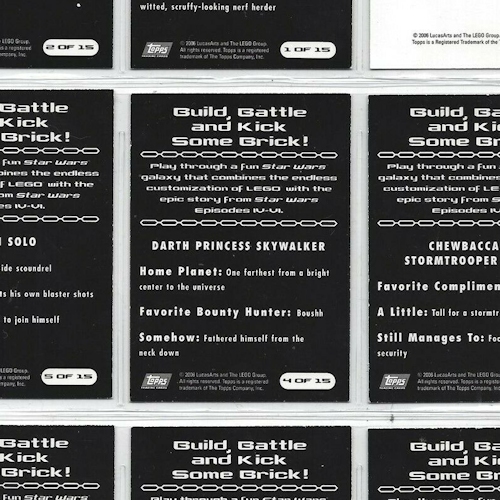 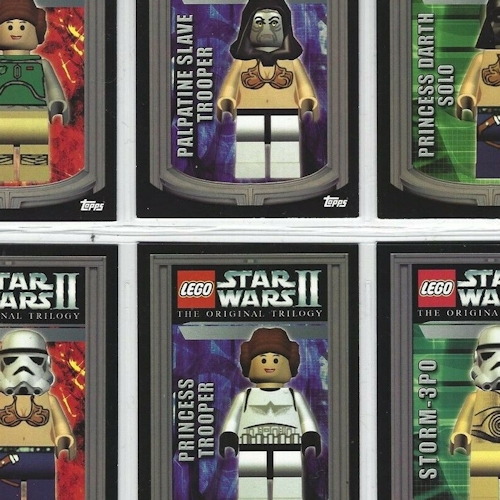 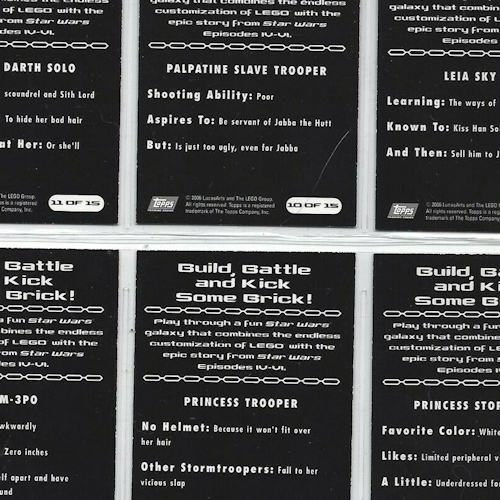 American entertainment retail store chain FYE offered consumers who pre-ordered the game a pack of these 12 special collector cards. Each pack contained 12 collector cards and two 'header' cards forcing shoppers to buy a second game or turning to eBay in the hopes of completing their card collection.\

In advance the game's release a number of retail stakeholders - including Toys "R" Us, Wal-Mart, Target, Best Buy, GameStop, and Circuit City - provided additional floor space for displays, posters, standees and promotions to draw attention to the new title.

The game's multi-platform release date was set for September 12 in the USA to coincide with the DVD release of the Original Trilogy (though Europe got it on September 11 and Australia on September 15). Initially released on Nintendo DS/Gambeboy Advanced/GameCube, Windows PC, Sony Playstation 2/Playstation Portable and Microsoft Xbox/Xbox 360, with a 2D mobile version in December 2006 while a MacOS version was released by developer Feral Interactive in February 2007. 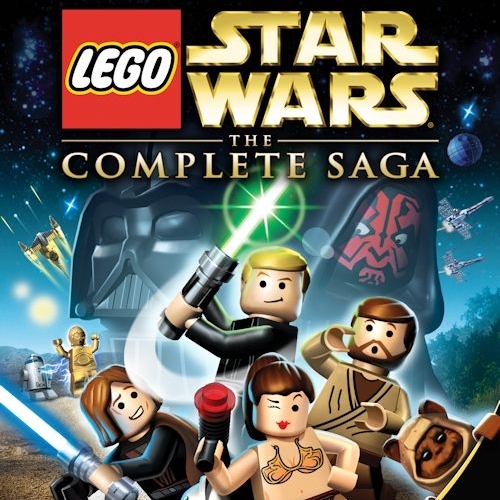 The next title in the LEGO Star Wars video game series was to be a compilation. Prematurely (though we didn't know it at the time) entitled LEGO Star Wars The Complete Saga it recompiled both of the two previous titles into one cohesive environment. The game was announced by LucasArts on 25 May 2007 at Celebration IV, and promised to further expand on the gameplay and offer new levels.

Unique to LEGO Star Wars: The Complete Saga are the bounty hunter missions; these unlockable side missions require the player to find a particular character that is hiding within the level. With each success bounty hunted a gold brick is awarded. Two of the bonus levels - Anakin's Flight and Bounty Hunter Pursuit - were originally intended for LEGO Star Wars: The Video Game but were cut during development. Taken from the Battle of Naboo in The Phantom Menace and the chase in which Obi-Wan Kenobi and Anakin Skywalker persue Zam Wessel in Coruscant, respectively, both levels were updated from their original forms.

Updated graphics and a larger wardrobe for character customisation completed the game's upgrade.

Being largely a re-release, LEGO Star Wars: The Complete Saga didn't get the fanfare the previous two titles received, with only an obscure chain of fast food restaurants in France taking part, and its shelf dates were staggered instead of concentrated with the versions for the Nintendo DS /Wii, Sony Playstation 3 and Microsoft Xbox 360 coming out on November 6, 2007, for Windows PC on October 13 2009, MacOS November 12, 2010 (again by Feral Interactive), iOS on December 11, 2013, and Android on January 1, 2015.


The story of how these two iconic brands continued to be a worldwide video gaming success doesn't end LEGO Star Wars: The Complete Saga. Instead a new chapter was about to begin, so join us for part two - coming soon!
SEND