Mini Steps: C-3PO Evolves
Posted by Jeremy on May 11, 2020 at 09:01 PM CST
The long history of the 3-3/4" action figure is embedded in Star Wars collecting lore - there are very few vintage fans who don't know the tale how Bernard Loomis created the iconic toy line. Nor are there many collectors who have failed to note how the scale and detail of Star Wars action figures have waxed and waned over the last four decades.

But what of the diminutive minifigure? Who among us knows the rich story behind the LEGO equivalent of the articulated figurine that since 1978 - pretty much the same time as the 3-3/4" Star Wars action figure arrived in toy stores - has epitomised LEGO play values.

Though their history starts in 1974 with the launch of the LEGO building figure (dubbed the Homemaker) it only a year later that their first evolutionary step took place. 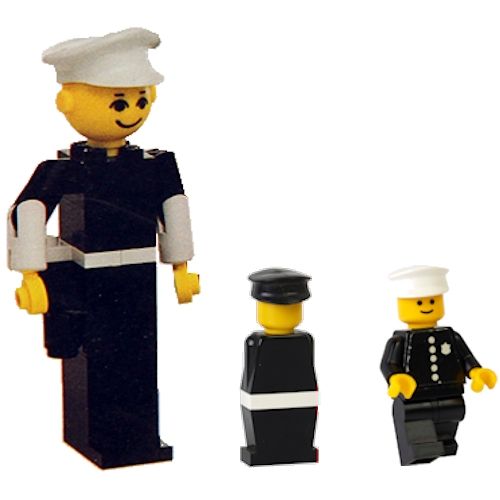 Conceived and designed by Jens Nygaard Knudsen in 1975, the first minifigure was known as the LEGOLAND minifigure, with its arm-shaped bulges on either side of its body and no moving parts it was a simple mannequin compared to the next step in its evolution.

It wasn't until 1978 that the minifigure we know today - with articulated arms and legs - came into being. First appearing in 600 Police Patrol, the minifigure became commonplace in Town, Castle, and Space sets and from then there was no looking back. Jumping forward forty years, the four-brick high companion's popularity meant that its production finally out-populated human beings, and LEGO celebrated the minifigure's 40th birthday by including Police Officer in the eighteenth series of Collectible Minifigures.

What about Star Wars minifigs? Kevin Downard, creator and curator of popular LEGO Star Wars minifigure app LSW Collector, takes a close look at the major Star Wars characters in their minifgiure form, from their initial inception through today.


Starting the series off is a character well-known to Star Wars fans: C-3PO, who along with his companion R2-D2, appears in every episode of the Skywalker Saga (as well as Rogue One). He even got his own show with Droid Tales, a nine-episode look at the Star Wars story from the perspective of this "humble" protocol droid.

First appearing in minifigure form in the year 2000 found in the first version of the Millennium Falcon (set 7190). This first iteration was molded in pearl light gold and is the only minifigure to come in this color and would appear in a total of five sets and continued to be used through to 2005.

The next iteration of C-3PO featured a color swap to pearl gold. However, the printing stayed the same from the original C-3PO. The color stuck as he would remain pearl gold up to today (with one exception). This version appeared in four sets and a variety of watches and a magnet set. Rumour has it the same figure was also found with pearl light gold hands in the 10144 Sandcrawler set. Interestingly even though C-3PO would later get updated printing, the watch sets continued to use this version up through 2015.

As a side note, pearl gold underwent a reformulation in 2010 that resulted in a darker shade of ABS. This difference can be seen in some C-3POs depending on when the minifigure was created. 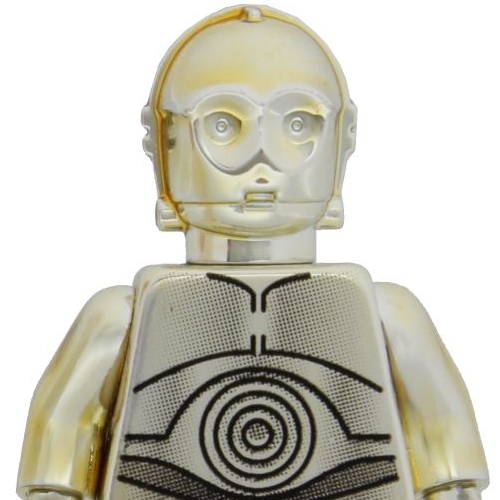 In honor of the 30th anniversary of A New Hope in 2007, LEGO had a special chrome gold C-3PO produced. Limited to 10,000 copies distributed in a unique white polybag it was randomly included in the LEGO Star Wars sets of that year; this version of C-3PO quickly became highly collectible. It remains the most expensive LEGO Star Wars minifigure to this date on the secondary market. 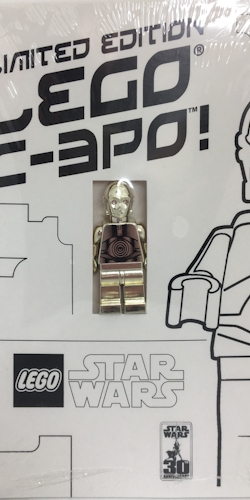 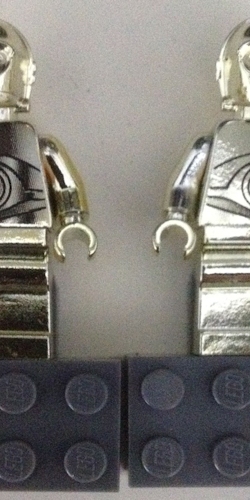 This piece was also made available through the Australian version of the LEGO Club Magazine. Participants in the competition had to answer the question "why is C-3PO gold?" to win one of 100 blister-packed version of the minifigure. Thankfully for the majority of collectors who wont be able to obtain this piece, the C-3PO is identical to the polybag version.

It was later discovered that two variants of this minifigure exist. Although initially thought that one was found in North American markets with lighter print features and the other found throughout the rest of the world with prominent dark printing, it appears that this geographic separation does not always hold true. 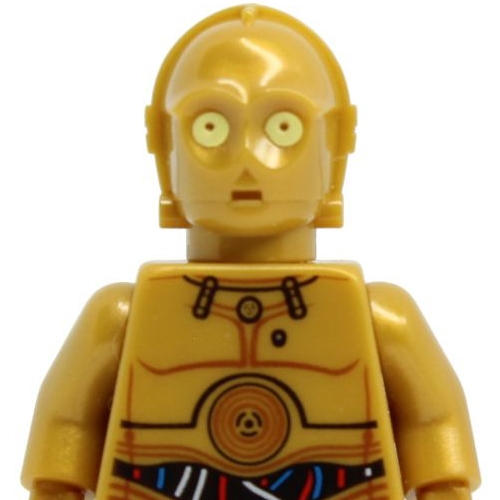 After more than a decade, C-3PO finally received a new paint job in 2012. Threepio for the first time featured printed eyes and colored wiring on his chest. This version only appeared in three sets, including the Celebration Anaheim exclusive Tatooine mini-build set in 2015. 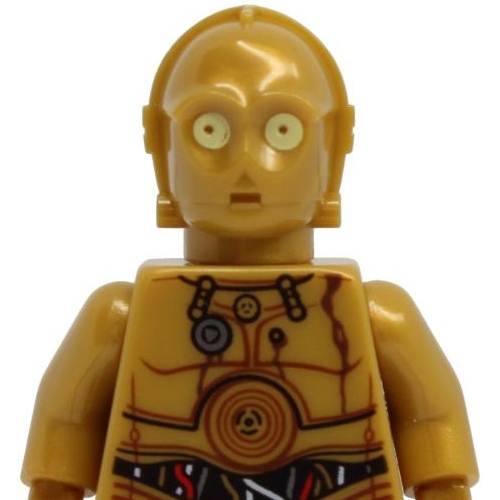 Included in only one set - 75059 UCS Sandcrawler - C-3PO added to his print details with a shiny robot limiter/restraining bolt. This badge given to him by the Jawas made for a refreshing variant for many collectors and one appropriate only for the Sandcrawler. The next rendition of the Sandcrawler did not include a C-3PO minifigure at all, so this may be the only time we see Threepio with his additional hardware. 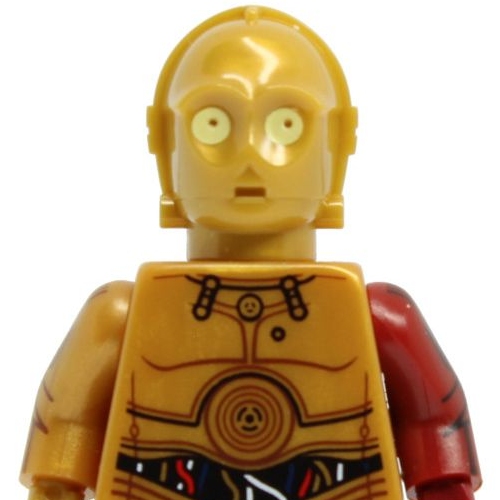 You probably didnt recognize him when he arrived in a promotional polybag in 2015. Besides his arm being red, this is also the first (and so far only) C-3PO that features arm printing. As an added bonus, this version also sports printed legs which are different than the ones on the above figure. This also marked the second polybag version of C-3PO. 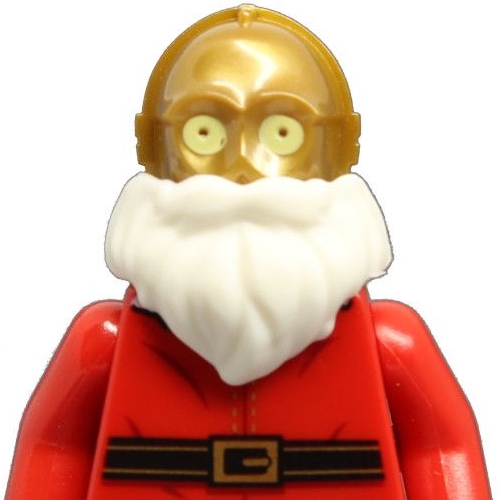 In accordance with previous years, C-3PO was selected as one of the minifigures to get a holiday makeover for 2015. Included in 75097 Star Wars Advent Calendar, collectors received Santa C-3PO on Day 24! The Santa jacket torso and white beard had Threepio disguised once again. 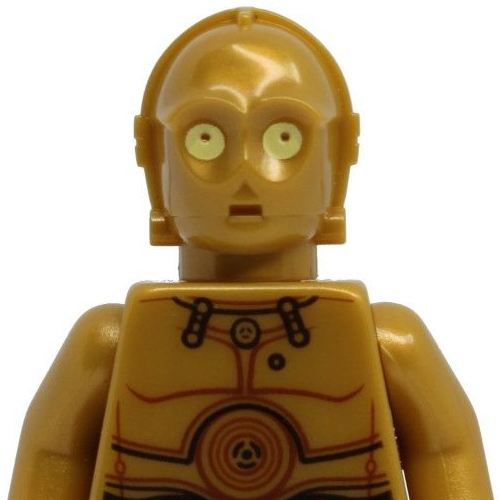 Using the legs from the UCS Sandcrawler and Santa C-3POs, combined with an updated chest printing, the final version of Threepio was created. LEGO must have gotten it right because this is the most used version to date appearing in ten sets between 2016 and 2020. He can also be found in the Official LEGO Star Wars Annual 2019, R2-D2 and C-3POs Guide to the Galaxy, and a few other non-English language books.

This protocol droid has been in minifigure form for 20 years now with nine different variants. Covering 23 regular production sets, one con exclusive, two polybags, and a multitude of watches and books, Threepio has seen quite a lot of LEGO action. Not a true minifig, but C-3PO also came in two pen varieties. Will this most recent version be the last update to the C-3PO minifig? Has it been perfected? Only time will tell! 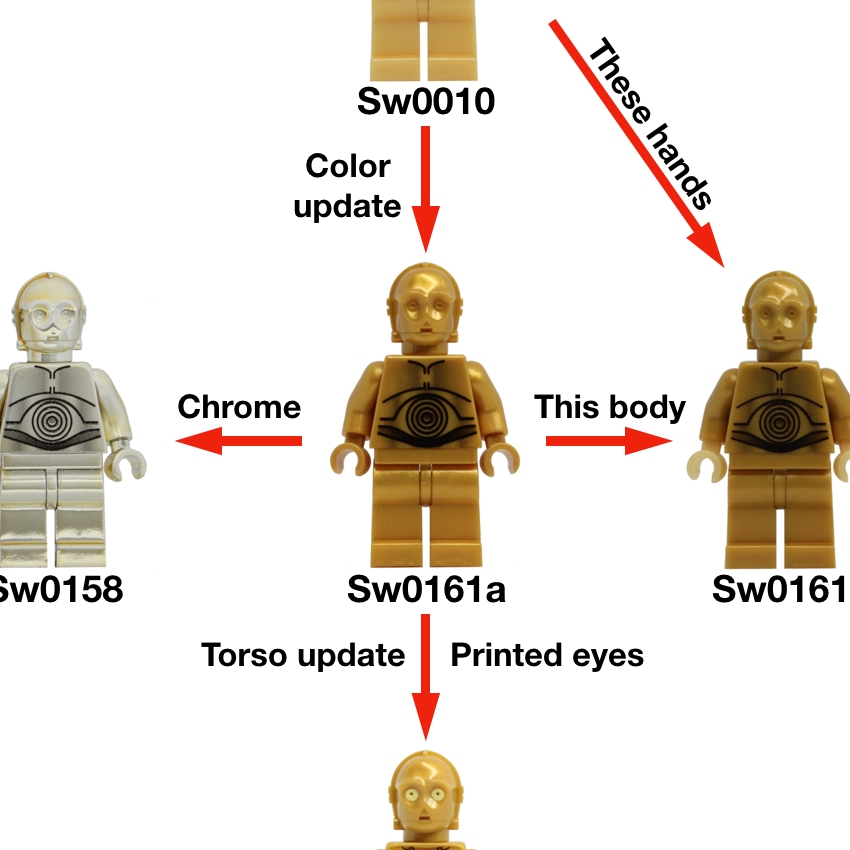 Kevin has been a fan of Star Wars for as long as he can remember and started collecting LEGO Star Wars right from the beginning in 1999. He developed his LSW Collector app right before he joined the Rebelscum forums in 2017 when he helped overhaul the LEGO section, which he now assists in curating. As well as assisting with Rebelscum's LEGO Star Wars content, Kevin continues to update his minifigure collecting app whenever new sets are released. You can follow Kevin on Instagram at @lsw_misprint_collector where he shares his collection misprints, test shots, defects, and other LEGO oddities.

If this article has got you interested in minifigs then head over to our specially crafted LEGO Star Wars Minifigures section of our forum and start your journey.
SEND