ROTS Preview: Vehicles and Ships
Posted by Jay on February 27, 2005 at 08:51 AM CST
How does one get to a galaxy far, far away? With the coolest action vehicles this side of Mos Eisley! This assortment of incredible starfighters and vehicles from Episode III is coming soon to a toy store near you. Buckle up!

Anakin Skywalker?s Jedi Starfighter
Anakin Skywalker is one of the most skilled and daring fighter pilots in the Republic. His amazing piloting abilities make him a powerful ally and a formidable enemy. Anakin and his former master Obi-Wan Kenobi battle deadly droid fighters while on a dangerous mission to rescue Chancellor Palpatine, who has been kidnapped by Separatist forces. Vehicle features firing missiles, spring-open wings and retractable landing gear. 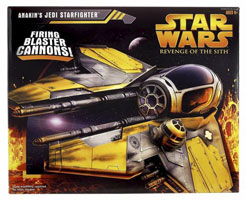 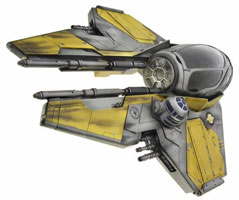 Obi-Wan?s Jedi Starfighter
Obi-Wan Kenobi battles deadly droid fighter pilots while on a mission to rescue Chancellor Palpatine, who has been kidnapped by Separatist forces. As he heads for the vessel on which the Chancellor is being held, buzz droids attach themselves to his starfighter to destroy it. Vehicle features firing blaster cannons, spring-open wings and retractable landing gear. 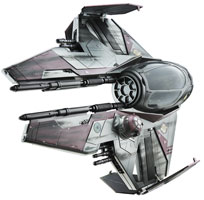 Droid Tri-fighter
The droid tri-fighter is a weapon of the Trade Federation, which has aligned itself with the Separatist forces. The droid is armed with laser missiles that contain buzz droids, which attach to enemy ships and tear them apart. Vehicle includes buzz droids, firing missile blasters and bombs. 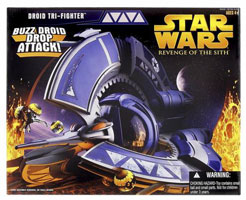 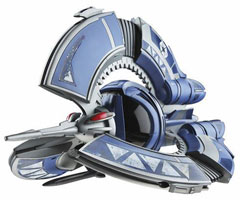 Grievous? Wheel Bike
General Grievous? Wheel bike is a custom-designed mobile attack vehicle. He sits in the center sphere, and the wheel revolves around him in driving mode. The four legs are used in walking mode and to climb vertical surfaces, such as the sinkholes on Utapau where Grievous battles Obi-Wan Kenobi on Boga. Position the adjustable claws and movable legs for walking or attacking action, or release the firing missile. 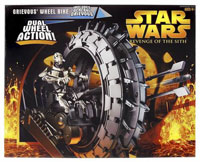 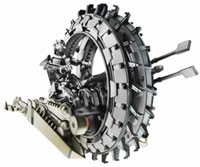