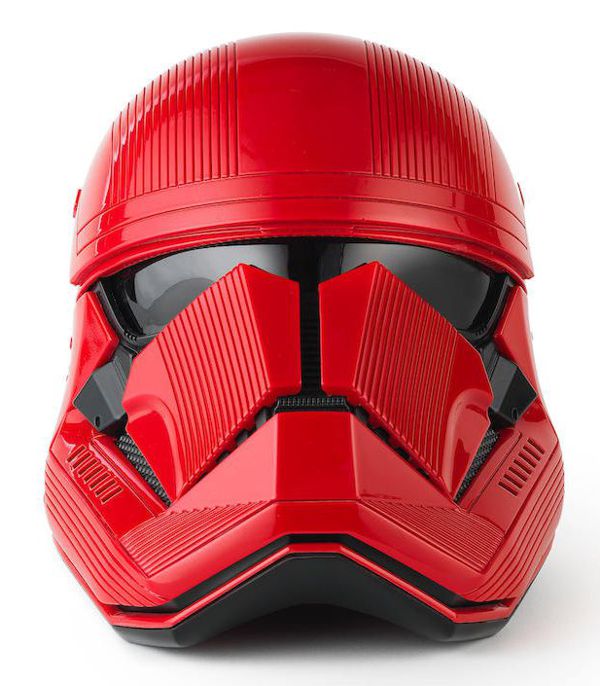 STAR WARS - THE RISE OF SKYWALKER: A PRODUCTION USED SITH TROOPER HELMET, Lucasfilm, 2019, cast in red polyurethane and designed by costume designer Michael Kaplan, the helmet has distinctive scoring to the crown and areas of the face guard, with dark smoked acrylic eye guards and vented airways at the side, foam padding to neck surround and inside for head support. A handwritten '25' is written in black pen. The helmet is accompanied by a letter on Lucasfilm headed paper and a Lucasfilm signed certificate that features the Sith insignia stamp.

Footnotes
Sith troopers were introduced in the last episode of the most recent Star Wars trilogy, The Rise of Skywalker (2019). They are the next evolution of the Imperial First Order soldiers, who are not clones but have been named directly after the Sith Order and trained from their teachings, legacy and ideology. Due to this they can be categorised as the most loyal to the Sith with the purpose to destroy the Jedi. To help portray this elite and menacing new fighter, their armour is designed in bright crimson red. There are many similarities to the more common and recognised Stormtroopers, whose armour has evolved throughout the films. The key addition being the red colour and the scoring to the helmet which continues on the Sith trooper body armour.

The Sith trooper helmet being offered in this lot was made for production, and the helmet shows signs of wear with minor scrapes and marks in line with production use. The accompanying Lucasfilm certificate states "...the Sith trooper helmet is genuine and was used during the filming of Star Wars: The Rise of Skywalker" and is signed and dated June 25, 2020.


According to Lucasfilm, 100 of these helmets were made, and 30 were used during filming. The remaining helmets, are currently retained within the Lucasfilm archive.

Provenance:
Kindly donated by Lucasfilm to BAFTA for this sale, proceeds of which will go towards the Illuminating BAFTA campaign, expanding BAFTA's learning and new talent programme.