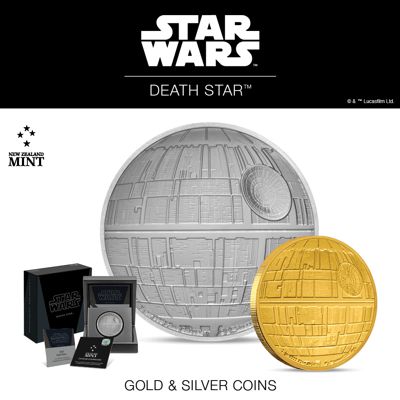 Following the sell-out success of their Death Star 2oz Silver Coin, New Zealand Mint can now offer those who missed out a 1oz version of the Death Star in silver or gold!

Created by the Empire, the Death Star was the ultimate weapon: a moon-sized space station with the ability to destroy an entire planet. Supreme Chancellor Palpatine plotted to build the first dreaded Death Star. The first time we catch a glimpse of the space station is on Geonosis, in Star Wars: Attack of the Clones. Although at this point were not quite sure what it is, we know the Sith want to build it, and thats reason enough for us to fear it.

Each coin arrives in a Star Wars themed box. Inside theres a quality coin case designed to allow the impressive coin to be angled for display. Each coin has a Certificate of Authenticity confirming it as limited-edition made from pure silver or gold.

With only 5,000 of the silver coins, and a very limited 500 gold, available worldwide dont wait until the Death Star becomes operational. Get yours now!

If you are keen to be one of the first to hear about Star Wars gold and silver collectibles from New Zealand Mint, you can find them on Facebook, Twitter, Instagram or sign up to their newsletter to get Star Wars new releases emailed directly to your inbox!