STRIKING FOURTH COIN IN THE STAR WARS GUARDS OF THE EMPIRE GET YOURS TODAY! 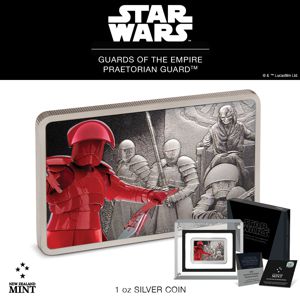 The fearsome Praetorian Guard feature on the fourth coin in New Zealand Mints officially licensed Guards of the Empire Silver Coin Collection. These elite warriors were created and developed for Star Wars: The Last Jedi, the eighth film in the Star Wars saga, which was released in 2017.

Clad in ornate crimson armor, they guarded Supreme Leader Snoke, ready to meet any threat with a savage response. The Guard consisted of eight sentinels divided into four pairs, with each pair brandishing unique weapons designed for close combat. Their red armor was a deliberate echo of that worn by the royal protectors of Emperor Palpatine.

The coin shows one of each of the four pairs of Guards, three engraved in the background protecting Supreme Leader Snoke and one in the foreground in his striking crimson coloured armor. An unusual, rectangular 1oz pure silver coin, it has an antique finish which adds to the menacing feel.

The coin is packaged in a Star Wars branded box and kept safe inside a magnetised display case. A Certificate of Authenticity confirms its unique number in the limited 2,000-coin mintage.


If you are keen to be one of the first to hear about Star Wars gold and silver collectibles from New Zealand Mint, you can find them on Facebook, Twitter, Instagram or sign up to their newsletter to get Star Wars new releases emailed directly to your inbox!