Star Wars Memories: My Time In The (Death Star) Trenches
Posted by Jeremy on December 3, 2019 at 06:23 PM CST
If you've been around the Star Wars block a few times you'll have heard of Steve Sansweet, the King Geek who brought us Celebration and now hosts the world's greatest Star Wars collection at his Rancho Obi-Wan, but you'll be pardoned if you find yourself asking "Who is Craig Miller?". I know I did.

In answering this question I found out that I didn't quite know the back story of Star Wars, The Empire Strikes Back or the company who brought them to us quite as well as I thought. And for that reason alone, reading Star Wars Memories: My Time In The (Death Star) Trenches is well worth it.

If that isn't enough persuasion, you'll get to know Craig too. In laying himself bare this thoroughly charming man gives the fanbase an opportunity to deep-dive into a very important period of his life and an equally vibrant time in the history of Star Wars. One hopes his efforts unlatch a Pandora's Box full of cherished memories, rather than the tarnished ones many of us hold to nowadays. 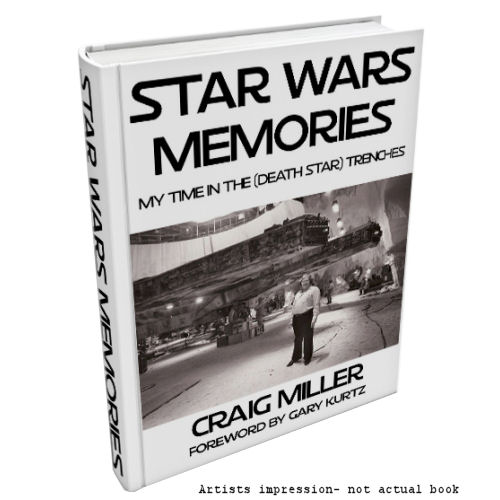 In painting a picture of who the author is, the book's official blurb describes the contents as a mish-mash of personal narratives and inside scoops.

Craig Miller was the original Director of Fan Relations at Lucasfilm, working on "Star Wars" and "The Empire Strikes Back". As part of that, he was a publicist, a writer, an editor, and a producer. He wrote press material and articles, created and ran the Official Star Wars Fan Club, oversaw a staff who opened and responded to the seeming tons of fan mail the films received, worked with licensees, created a telephone publicity stunt that accidentally shut down the state of Illinois phone system, was the producer on projects ranging from episodes of "Sesame Street" to commercials for Underoos (underwear thats fun to wear), operated R2-D2, and spent weeks hanging out on the set of "The Empire Strikes Back".In Star Wars Memories he talks about all of that and more...

"And more" is right, because Craig goes on to deliver countless tales that will definitely engross the reader, and because this book isn't the sterilised, overly factual making-of titles or an official Lucasfilm/Disney production it can get away with letting out a few of the more lurid (but still PG) occasions that are part of the secret Star Wars history. It's a very soft read that will leave you with a more light-hearted impression of the cast and crew behind the first two Star Wars movies.

Perhaps most charming of all are the early stories of the Star Wars fan community. These days we tend to see ourselves as +40 somethings who have slowly become embittered by corporations meddling in what has become as much part of the fabric of Generation X as Elvis and the space programme are to Baby Boomers. Craig remembers things differently, and reading his chapters on the early conventions, getting the official Star War fan club off the ground and launching the newsletter is a breath of fresh air. Being a Star Warsfan was so much easier back then.

Quite presciently Craig ends his book with a lengthy interview with the man who has just delivered I Am C-3PO: The Inside Story to the world. Given that Craig's conversation with a younger Anthony Daniels is the unabridged version of an early Bantha Tracks article, it will be interesting to compare and contrast these two reflections.

Before I started down Craig's path of remembrance I could scrape up a handful of original memories but now they are flooding back. My own personal Pandora's Box has been cracked wide open. Thank you Craig!